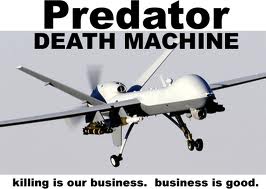 It is offensive that Key won’t be bringing up the death of a NZ citizen from a drone strike when he visits Barack Obama, and it is an outrage that the reason why Key can’t criticise him is because a) the GCSB is apparently providing intel all the time for Drone strikes and b) it may well be that the Government required an example Key could use to justify the mass surveillance legislation last year meaning Daryl Jones could have been killed for political capital.

Key insisted that New Zealand’s contribution to the US drone programme is legal, and that moreover, our efforts “would be in the pursuit of trying to hold to account very bad people.” Both assertions completely beg the questions. The legality of drone strikes is still very much in dispute under international law, given that drones are being used to kill people in countries with whom the US and New Zealand are not in a declared state of war – and where the rules of engagement, the criteria for targeting and the proportionality of killing the individuals in question relative to the threat that they pose, are all unknowns.

The entire sordid weeping pus filled wound that is the compromise NZ has had to make to get Facebook friend status for John Key from Barak Obama might look excellent on John Key’s CV, but the ramifications for all of us are septic.

Let’s just pause and consider the totality of what we are doing here. We are providing target intel to the Americans for their drone strikes. You know the strikes I’m talking about, the indiscriminate ones that bomb wedding parties, large gatherings, funerals, people holding shovels, the occasional terrorist and children. Oh yes, those drone strikes kill shitloads of children. Yes. Those drone strikes.

When death is remote controlled, the morality becomes even less relevant than when confronted behind a machine gun in the heat of battle. We are helping to kill people, many of whom are completely innocent and none of whom have actually been found guilty in a court.

Are we comfortable with that? Beyond needing to love everything John Key does, beyond the politics of it, beyond left or right, isn’t targeting people via such methods which result in huge civilian collateral damage a murderous and despicable thing to partake in?

Isn’t it? We may not pull the trigger, but sweet Christ are we directing where the gun gets pointed. All we have heard to date from the Prime Minister and the Prime Ministerial spin mouthpieces is ‘attack the messenger’. A Journalist with the respect and integrity of John Campbell gets denigrated rather than any scrutiny of the facts of what he’s presenting. No one is disagreeing that we hand target information to the Americans who then use it to kill people and that’s the issue.

This is not what just war looks like, this is not what we have fought and died for in the past. If you stand tall on ANZAC Day, then how must those shoulders flinch in disgust at what we are helping perpetrate in Afghanistan?

Every Drone strike we do creates more terrorists as the families of the civilians killed turn radical.

There is a candle light vigil outside John Key’s house this Sunday. Every NZer that wants to stand for peace and stand for a world where we don’t agree this is an acceptable way to import democracy should attend.