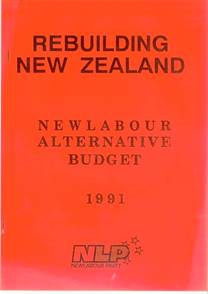 IT WAS ONE OF THE THINGS I admired most about the NewLabour Party (and later the Alliance) – it’s Alternative Budget. From its inception, in 1989, until its absorption into the Alliance, the NLP Leader, Jim Anderton, made a point of pre-empting the Government’s official Budget Statement with one of his own.

Along with Anderton, himself, the alternative document was put together by the NLP’s economic consultants, John Lepper and Petrus Simons, with invaluable input from the University of Otago’s Professor James R. Flynn. The irrepressible Flynn was the party’s unofficial conscience when it came to fiscal policy, insisting that it was politically unethical and tactically foolish to offer voters all manner of benefits without, at the same time, demonstrating how the party intended to pay for them.

It was Flynn’s stated intention to make not only his party comrades, but also the wider electorate, understand that democratic socialist outcomes could not be guaranteed in the absence of democratic socialist taxes. He knew that the fastest and most effective way of turning a party of idealists into a party of realists and pragmatists was by showing them how high income taxes would have to rise in order for them to cover the costs of what Bill English describes sneeringly as “nice to haves”.

It was very instructive to observe how the policy maximalists would wince when they saw how high the income taxes of not just the obscenely wealthy but ordinary middle-class professionals and skilled wage workers would have to rise if the Party’s pet projects were to go ahead. The wily old Flynn knew that the prospect of having to levy politically suicidal income tax rates would spur the membership into moderating their demands and searching for alternative methods of revenue-gathering. The result was the NLP/Alliance’s adoption of the Financial Transactions Tax – a measure which, very neatly, solved the problem of how to pay for paradise.

The preparation of an alternative budget is a highly educational (not to say therapeutic) exercise for any political party, but it is especially useful for radical parties like the NLP/Alliance and ACT.

That the ACT Party’s new leader, Jamie Whyte, not only recognises this but has actually gone ahead and released an alternative budget bodes very well for the party’s electoral future. At the very least it has forced ACT’s members into thinking seriously about where they want the country to go and how they propose to take it there.

As neoliberals, not democratic socialists, the task confronting ACT’s members would have been pretty much the opposite of the one facing the NLP/Alliance. Rather than starting with all the things they’d like to have and then calculating how much tax would be needed to pay for them, ACT’s members began by asking themselves how far taxes should be lowered and then worked out how many government services and transfer payments would have to be eliminated to make that figure possible.

The answer, of course, turned out to be: “A helluva lot!”

Whether the scale of expenditure cuts required to produce a top income tax rate of 17 percent made ACT’s members wince I do not know, but, after reading their alternative budget, I’d wager that very few of them were in any doubt about the radicalism of their party.

Well, I have a theory about this seemingly random number. Originally, I suspect, the desired top tax rate was deemed to be 10 percent. But, when ACT’s economic advisors told them that to bring the top rate down to that level would require them taking a very large and a very blunt axe to health, education and welfare spending, they reluctantly decided that, 10 percent being electorally suicidal, a higher figure was required. Hence 17 percent.

Set at this level, Whyte is able to reassure (the Epsom?) voters that taxes can be lowered dramatically without slaughtering the New Zealand electorate’s sacred cows.

It is interesting to note that immediately following the release of its alternative budget the value of ACT’s “stocks” on iPredict rose to 3.8 cents. In other words the political speculators now expect ACT to win nearly 4 percent of the Party Vote.

Why, then, does Labour not produce an Alternative Budget? Wouldn’t such an exercise be of enormous assistance in putting some credible flesh on the bones of Opposition policy? Would it not ensure that when John Key, channelling Tom Cruise, began shouting: “Show me the money!” the Leader of the Opposition was well equipped to do exactly that?

Because, when you think about it, there’s really no excuse for an opposition party not being able to cover its policy bones with detailed flesh of. Opposition politicians would, after all, like us to believe that they have what it takes to form an alternative government. So, surely, within its ranks there ought to be sufficient wit and experience to pull together an alternative budget?

Oh yes, I know, the political “strategists” will have none of it. “Why show the Government your hand?” They will ask. “Why risk Treasury ripping all your numbers to shreds? The resources just aren’t there for the Opposition to even contemplate producing a document to challenge the government’s budget statement.”

But no one’s asking for that sort of detail. All Labour’s supporters want to hear is the two Davids – Cunliffe and Parker – making confident replies to Government and news media questions about numbers. The policies of the alternative government have got to add up. If working people are going to be better-off – or worse-off – as a result of Labour’s policies, then surely they have a right to know by how much? If Phil Twyford wants to be believed when he says the next Labour Government will build 10,000 affordable homes every year, then he must be able to quantify “affordable” in a way that makes sense to a young couple bringing in $70,000 per year.

The so-called “cheese-on-toast” budget that National will deliver on 15 May is unlikely to be spectacular – but it doesn’t have to be. The Government will simply point to their handling of the Global Financial Crisis; to steadily expanding economic activity; to rising business confidence and falling unemployment and say: “See? It’s steady as she goes. The economy’s in safe hands.” The advantages of incumbency are numerous and usually decisive.

Unless. Unless they are systematically undermined by an Opposition with a clear and compelling story to tell. Using broad brush strokes to outline their alternative narrative, but also supplying sufficient detail for ordinary people to be able to imagine themselves into the story.

If there really is an alternative – for God’s sake, let’s hear it!