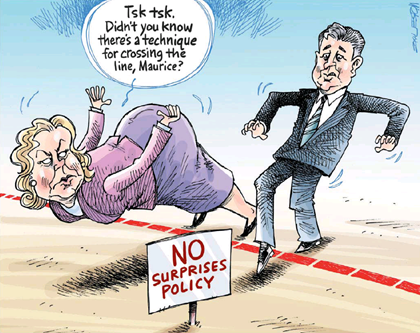 WHAT MAKES A PERSON LASH OUT in the way Judith Collins lashed out last night on TV3? In some part of her being the voice of reason was surely shouting: “No! Judith, stop! Don’t do it!”

She should have listened to her rational self, because there is no place in the world of political light that publicly attacking a perfectly innocent Press Gallery journalist could ever be a good idea. And even in the world of political shadow there are very few who would recommend it. And yet, Collins did it: she attacked Katie Bradford; wilfully bringing down upon her head all the readily predictable consequences of such political folly.

I suspect the answer lies in the immense difficulty Collins is currently experiencing in keeping all the aspects of her personality in alignment. She may even have reached the point where, surveying her predicament, she realises that the task she has set herself is impossible. That remaining a loving and loyal partner to her husband; a constructive member of the National Party Caucus; an effective Cabinet Minister; and a useful colleague to the Prime Minister have become mutually contradictory goals.

It is easy to forget that politicians have private lives. That within their closest relationships there are often emotional imperatives every bit as strong as the strict political obligations of their official existence. Obeying such imperatives may not always lead a politician down the paths of righteousness. The rules of the Cabinet Manual and the promptings of the heart will very often, I suspect, diverge. And what are a set of dry old rules compared to the gleam of love and gratitude in one’s partner’s eyes. People are not made of stone.

In the Western tradition, however, the leading figures of the state are supposed to be exactly that. Stone statues of rectitude, impervious to all the usual human frailties. Constitutional avatars, far above the petty deeds and insatiable greed of the vulgar masses. When Julius Caesar’s wife fell victim to the baseless slanders of his enemies he divorced her, telling the citizens of Rome that: “Caesar’s wife must be above suspicion.”

That is an impossibly high standard. Human-beings are not made of marble, but of flesh and blood. Who would not, therefore, resent the demands placed upon them by the sort of rule-book that prevented them from helping their spouses? Wouldn’t we be tempted to say: “Fuck the rules!”?

And that is the point-of-no-return. The journey from the world of political light to the world of political shadow begins right there: with the politician’s refusal to follow Caesar’s ruthless example of sacrificing the needs and desires of one’s nearest and dearest upon the altar of one’s constitutional obligations. And, having made that refusal, further resolving that, henceforth, a mere semblance of rectitude will have to do.

But a semblance of rectitude cannot be maintained without the support of, at best, partial truths and, at worst, outright lies and deception. Under such conditions political life becomes dangerously contingent. The threat of exposure, of the unreality of their constitutional probity becoming plain to all, begins to weigh more and more heavily on the politician’s mind.

Initially, it is only his or her colleagues who begin to notice that the politician’s rectitude is no longer real, and that he or she has grown increasingly adept at lying. Some will drift away, but others, themselves accomplished dissemblers, will draw closer. Eventually a culture of deceit grows up around such politicians and they find it difficult to recall the time when they were not required to dissemble: when their rectitude was real. Gradually, the shadows deepen about them and their political world grows dark.

It is, therefore, only natural that when the news media directs a blinding shaft of light upon the rotting thing that was once their political rectitude they lash out in fury.

Not just at those bearing the light, but at the all-too-human weaknesses that led their better selves into the dark.