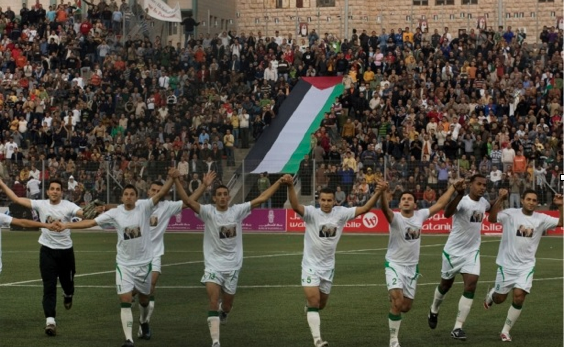 Over many years of reading horrendous stories of Israeli brutality towards Palestinians even I was taken aback to read this story of Israeli soldiers shooting the feet of Palestinian soccer players to ensure they never play competitive soccer again.

In summary the story says:

“Their names are Jawhar Nasser Jawhar, 19, and Adam Abd al-Raouf Halabiya, 17. They were once soccer players in the West Bank. Now they are never going to play sports again. Jawhar and Adam were on their way home from a training session in the Faisal al-Husseini Stadium on January 31 when Israeli forces fired upon them as they approached a checkpoint. After being shot repeatedly, they were mauled by checkpoint dogs and then beaten. Ten bullets were put into Jawhar’s feet. Adam took one bullet in each foot. After being transferred from a hospital in Ramallah to King Hussein Medical Center in Amman, they received the news that soccer would no longer be a part of their futures. (Israel’s border patrol maintains that the two young men were about to throw a bomb.)”

The story about the bomb is just that – a story concocted to cover another act of appalling racist violence. We heard the same stories repeatedly during the dark days of apartheid South Africa when black South Africans would die in detention after “slipping on the soap in a shower” or “rushing to an 8th floor window and hurling themselves out”.

The soccer story takes on particular political significance because it follows a pattern of Zionist behaviour in which the Israeli apartheid state does everything within its murderous power to deny Palestinian statehood and crush Palestinian national identity and national pride.

As in so many countries, New Zealand included, national pride is expressed most importantly for Palestinians through national sports teams. Soccer is the No 1 sport in Palestine so Israel has frequently targeted soccer venues. Palestinian soccer grounds and stadiums (they are used for terrorist purposes say the Zionist generals) and sports facilities in general are always amongst the first bombing targets for the Israeli military when they attack Gaza for example.

Despite this a Palestinian national team has been accepted into the world soccer governing body FIFA and despite an unsurprisingly lowly international ranking (144th) the team is a source of pride and national identity for Palestinians. The team and its players are therefore targets.

If you are appalled at this callous Israeli brutality then write to our Foreign Minister Murray McCully urging him to abandon New Zealand government support for Israel and for New Zealand to support the international BDS (Boycotttt, Divestment and Sanctions) campaign against Israel. I just did – his address is M.McCully@ministers.govt.nz