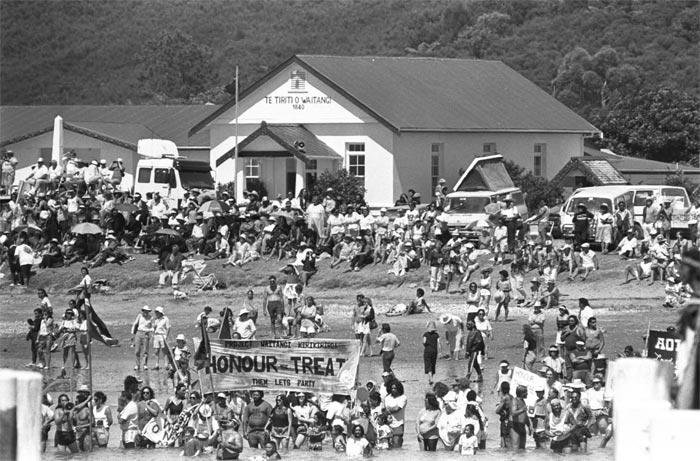 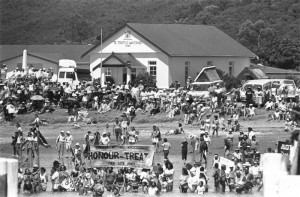 This year, I headed up to Waitangi on Waitangi Day for the first time ever. Not just the first time I’ve been there on the 6th, but actually the first time I’ve been to the Treaty Grounds at all. We made an early morning trip- up at 3am to get there for the dawn service (we were a little late but got to see most of it). We were tossing up between only getting a couple of hours sleep and being there for the service or sleeping in and just heading up during the day. We decided it was a really important and necessary part of the day, and I’m so glad we attended.

There were many beautiful karakia from various community leaders, politicians and audience members. Hone Harawira was clearly at home, making easy jokes at Key’s expense. A final, very emotionally raw and undeniably political karakia from a young woman pointed at the inequality between maori and pakeha, which of course strikes at the heart of why many (myself included) feel it is inappropriate to ‘celebrate’ Waitangi Day yet.

By the end of the ceremony we were feeling chilled from the drizzle that had persisted throughout the service, so headed back to the car for warmth and a nap. We emerged in time to see the waka heading off, which was very cool. Then checked out all the market stalls. I had a truly excellent mussel fritter courtesy of the Pattie Wagon. There was lots to enjoy during the day. Though I would love to go back one year when the weather is fine, because it clearly has the potential to be a really lovely family day in the right conditions (ie not raining with a very strong easterly). Despite the negative wrap the day gets, and the massive amount of work that remains to be done with regards to indigenous rights in NZ, the feeling at the grounds was certainly upbeat and festive.

So all in all I had a wonderful day and would definitely encourage everyone who has never been to make the trip up.

There was one thing which really grated on me.

That was the massive over supply of police. It was completely unnecessary. I lost track when trying to count. Now I understand there was a need for traffic and crowd control, which the police were undertaking with the assistance of Maori wardens and a private security company. I also appreciate John Key needed protection, but there were at least 3 (purely from my quick scan and count) men in suits speaking into their sleeves. There were far far* more police than was necessary for assisting with these activities. Obviously, there are political tensions surrounding Waitangi so the argument could be made that this was just in case things fired up. But I would argue that there is at least equal chance of that happening at any one of the protests I’ve attended in recent years, which are of an explicitly political nature, and which had a far lower police-to-civilian ration.

It left me with a bad taste in my mouth. I felt offended on behalf of the organisers and (very well behaved and high-spirited) attendees. It felt way over done, and dare I say it…racist.

Still though, next year, grab friend and make the trip. It’s a really special day. I’m sure the more people who go and come back saying ‘there is still obvious work that needs to be done and we shouldn’t start celebrating yet, but we sure as heck shouldn’t replace Waitangi with ‘New Zealand Day’’ the less likely our major media outlets are to get hyped over minor shovings and pilchards. Or to take a defiant stand against doing there job and symbolise it with a White-Pride type picture.

*I emailed Northland Comms and asked for exact numbers, their reply (as expected) was:

“For operational reasons Police don’t reveal the number of officers on duty for Waitangi. We have the required amount of staff to ensure that all people attending the Waitangi Day ceremonies have a safe and enjoyable day. In recent years Waitangi Day has been a great family day with little disruption to ceremonies being held throughout the day.”