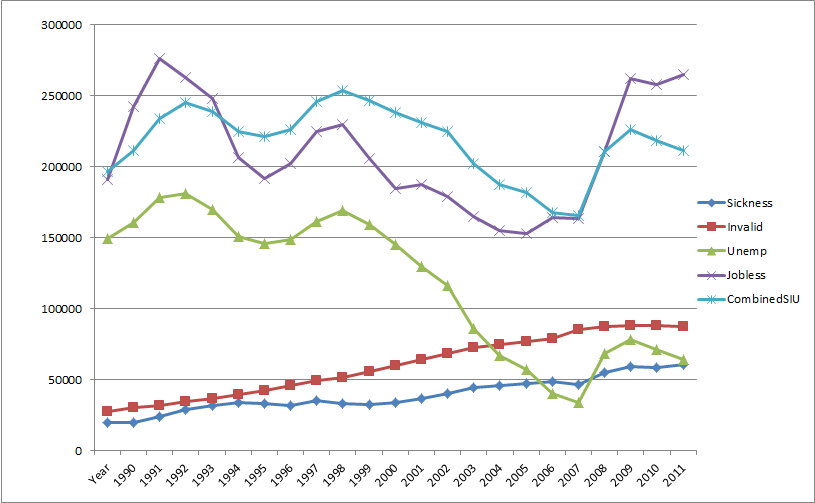 A right wing blogger has made a fool of themselves trying to dispute figures first revealed by me in the Dailyblog about how a huge gap had grown up between the number on benefits and the number being recorded as unemployed or jobless in the household labour force survey. She was replying to a column by my colleague Matt McCarten in the Herald on Sunday.

She did a crudely hand-drawn graph allegedly showing that if you combined the numbers on the unemployment benefit with the number on the sickness and invalid benefit you get a completely different picture. Well that is true with a hand drawn picture. However, if you actually use the official numbers from the Department of Statistics website and use an excel spreadsheet to draw the graph the picture is a little different (actually a lot different!).
Here is her graph. 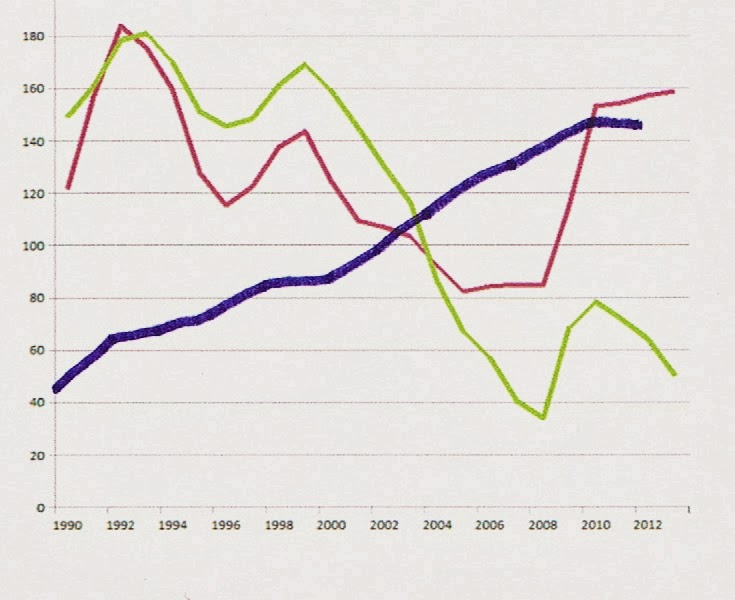 The purple line represents the number unemployed; the green line the number of people on the unemployment benefit. But what does it look like if I add the line representing people receiving a sickness or invalid benefit?
There it is. The blueish line. (Apologies for the crude scan and manually added line but I don’t want to spend any more time trying to make this point than I have to.)
The sickness and invalid benefits have increasingly become de facto unemployment benefits. The OECD refers to this phenomena as “medicalisation” of labour market problems. Being long-term unemployed can and does make people ill. It’s a problem all developed countries are grappling with.
Treen however claims:
There was also no significant increase in other working age benefits like sickness, invalid or sole parent benefits to account for the missing number of those receiving the unemployment benefit. I’ll leave you to draw your own conclusions as to why he would say that.

What you will first notice is she is not actually using the number I referred which combined invalid, sickness and DPB. The much larger number on the DPB has increased only modestly since 1990 which influences the combined number. However, I thought it would be useful to look at the number on sickness, invalid and unemployed combined and see how that number compared to the broader jobless number. It is true that these numbers have been increasing faster than unemployment over time. This is true for all advanced capitalist economies and the reasons are complex. But, even when we combine the benefit numbers, the huge gap between the number on benefits and numbers measured as jobless remains. Here is my graph using officials statistics and the graphing skills of excel rather than a crude drawing.

I wrote the following as a comment on her blog.

Hi Lindsay,
Thanks for trying to rebut my graph. I have redone it for the combined benefit numbers (Unemployed, sickness and invalid together). It shows a somewhat less dramatic but still dramatic gap opening up between numbers on benefits and the broader jobless number. The jobless number goes from being regularly 20-50,000 above the combined benefit number to being 50,000 below the number. Here is your graph when done properly. https://dl.dropboxusercontent.com/u/18076151/Combined%20benefit%20grap.png

I wonder if she will print my comment. I hope so. I like debating facts with right wingers.