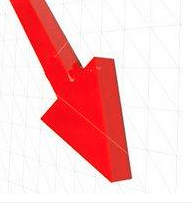 The latest Roy Morgan poll is not good news for the Progressive Left, with National regaining much the the loss it suffered in the last few polls, and up 3.5 percentage points since January figures. Labour and the Greens have dropped 0.5 and 1.5 percentage points, respectively.

For the First time, Kim Dotcom’s Internet Party is registering in a Poll. At 0.5%, it polls higher than both United Future and ACT. But unless it wins an electorate seat (unlikely), it will not gain representation in Parliament.

“The resurgence for National comes as Prime Minister John Key has raised the possibility of a referendum on changing the New Zealand Flag coinciding with this year’s election. Key made the point that Canada, which changed its national flag in 1965 to a maple leaf, had never regretted its decision to remove the Union Jack.

“However, despite this week’s improvement for National the latest Roy Morgan New Zealand December Quarter employment statistics show 19.8% (up 2.7% since the September Quarter) of New Zealanders are unemployed or under-employed. A total of 519,000 New Zealanders (up 69,000). For John Key and National to retain their current lead and stand a good chance of re-election at the end of the year, further reforms are needed to reduce labour market regulation and provide real opportunity for the more than half a million New Zealanders looking for work or looking for more work to find gainful employment.”

Which just goes to show; never under-estimate politicians and their tax-payer funded media strategists ability to manipulate the public.

On a discordant note, Gary Morgan’s reference to “further reforms are needed to reduce labour market regulation” is odd, considering that New Zealand’s labour laws are amongst the most de-regulated and liberal in the OECD. It would be hard to see what Morgan is referring to other than doing away with the minimum wage; all remaining health and safety laws; and banning Unions entirely? Bizarre.

Note: Taken between 20 January and  2 February 2014, the poll was conducted through  calling 846 respondents, both on landline and mobile telephones. Currently, Roy Morgan is the only polling company that calls cellphones as well as landlines.

The previous Roy Morgan poll was conducted by calling  1,509 respondents, As such, the lower figure of respondents may be a factor in National’s “improving” fortunes? (Or else, people just liked talking about the flag…)

One thing is for certain;  Labour, Green, and Mana supporters  are going to have to work bloody hard to effect a change in government this year. It’s going to be a tough year!