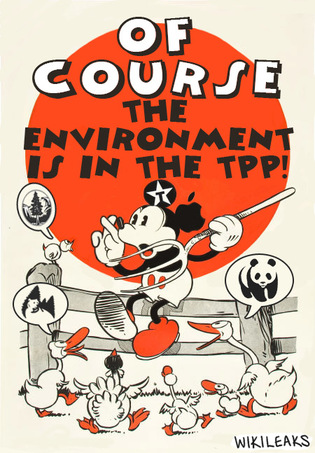 Wikileaks has kicked off the year for the battle to stop the TPPA juggernaut by posting its third leak in three months. This time it was the draft environment chapter and a report showing the twelve countries’ positions on that draft. They are dated 24 November 2013, the last day of the Salt Lake City round that preceded the December meeting of TPPA ministers in Singapore. Hey, Groser – tell your mates it’s time to wave the white flag!

The latest leak is significant for three reasons. First, the very fact that someone or some country on the inside has leaked yet another chapter shows there are some very unhappy campers holed up in these negotiations. Pressure is clearly coming onto countries that feel they need outside voices to help them hold the line. That pressure continues to intensify. Hopefully there will be more leaks from the disaffected that help us do that.

But this leak gives some insights into how ministers are trying to break through the deadlock in key chapters. Asking one country, in this case the Canadian chair of the environment working group, to prepare a new text ‘on their own responsibility’ to present to the rest is a controversial strategy used at the World Trade Organisation to isolate countries that are holding outlier positions, even ones that are critically important for them. They can be treated as obstructive if they insist on holding the line, unless they are sufficiently powerful to get their own way when it comes to the political trade-offs.

Second, the text is weak, hardly the 21st century standard-setter the cheerleaders have been claiming for the TPPA. Its provisions address a wide range of issues from overfishing, shark-finning and protecting endangered species to recognising indigenous rights over traditional knowledge and genetic resources. Most of the provisions are aspirational and it has no teeth to enforce what limited obligations there are.

I have mixed feelings about that. The core chapters of these agreements, especially on investment, agriculture, intellectual property and services, impose pro-corporate rules on governments and communities. Those rules are toxic to biodiversity, ecosystems, indigenous knowledge and resources, human and animal health, water, forests fish and other natural resources, and other aspects of conservation and the environment.

Environment chapters are used as fig leaves to deflect criticisms of them. So it is no surprise when they are weak. They are not meant to act as an antidote. So the leaked chapter confirms our expectations that the “gold standard” rules are only for the corporations, not to protect people and the planet. But if the agreement does happen, a strong chapter could be important.

That leads to the third and most significant point from the leaks. The chair’s commentary shows the US is the outlier on most of the disputes provisions. That includes articles that refer explicitly or by implication to international agreements it has not signed, such as the Kyoto Protocol, the Convention on Biological Diversity and the UN Declaration on the Rights of Indigenous Peoples.

But the most important outlier is the refusal of all the other governments to agree that even these weak obligations should be enforceable by trade sanctions under the dispute mechanisms that apply to the agreement as a whole. Instead, they have proposed a mixture of consultations, political discussions, and arbitration that leads to a conclusion about a breach and an action plan, but nothing to enforce it.

Back in May 2007 President George W Bush did a deal with the Democrat-controlled Congress. Its terms included what must be in the environment chapter of any US FTA. Those requirements include the enforceability of the chapter by imposing trade sanctions for governments that are found to have breached their obligations. The US has required that in all subsequent free trade pacts. The leaked text falls far short of the May 2007 standards in many ways, but especially on sanctions.

This puts Obama in a politically untenable position. Last week his administration tabled a Bill in Congress seeking fast track negotiating authority for the TPPA and other agreements. That would require Democrats and Republicans to accept or reject a final deal as a whole, within a specified time. Obama is already struggling for support. This environment chapter will strengthen opposition from many Democrats and force Obama to rely even more for support from hostile Republicans.

Yesterday, the US issued a statement that ‘we will insist on a robust, fully enforceable environment chapter in the TPP or we will not come to agreement’. So it is game on? It is hard to imagine that the environment chapter will be the make or break factor in the TPPA. It is what is symbolises that is more important. The question is: will the US get its way on this, and most other things it is demanding? Their next step is expected to be a ministerial meeting in Singapore around 24 February. Our next steps will be posed on itsourfuture.org.nz.

For those who are interested in an overview analysis of the documents and the implications for New Zealand, including for Maori on biodiversity, see the itsourfuture website.