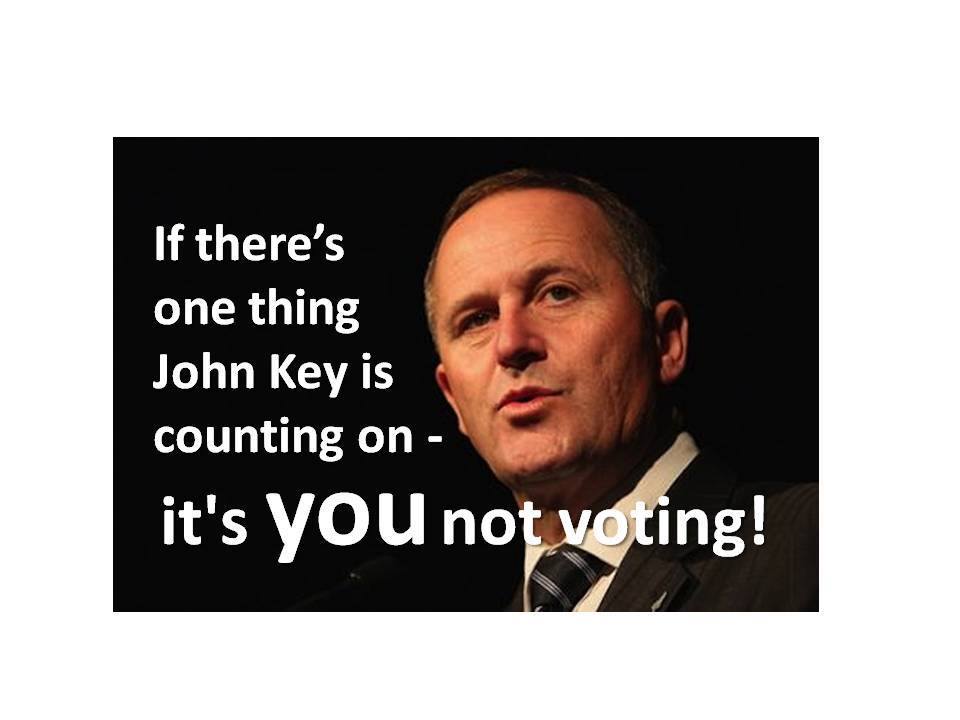 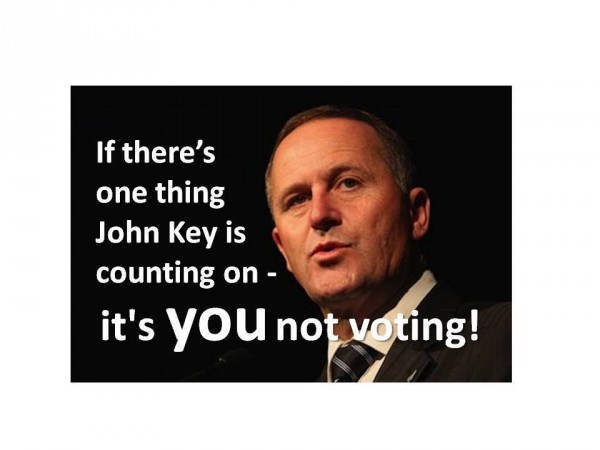 Election year in Aotearoa. Time for political meetings, delivering pamphlets, targeting messages and getting out the vote.

Of all these activities getting out the vote is the most critical. Motivating the alienated, apathetic and dispossessed to vote is a productive and lasting political strategy. Pitching to the centre may, just may, win an election but it further entrenches the politics of the right and deepens and sustains the disaffection
At this point I am not willing to predict who will be in Government by the end of 2014.

I am however, prepared to risk laying out a prescription for long term political success. It involves governing in the interests of the majority, protecting and promoting the rights of all, acting urgently to mitigate the effects of greenhouse gas emissions and protecting the environment, and utterly rejecting the economic fallacy of neo liberalism in order that a more equal society can be restored.

It is time for the restoration, not of divine kings this time but of an egalitarian society where every New Zealander is free from poverty and its deprivations and can access the opportunity to live a full and rewarding life.

The first is that a transition to a just and fair society will not be achieved without pain. There is likely to be capital disinvestment and economic sabotage in the short term.

This should be countered by a confidence that the world is scrambling for sources of protein and NZ is, and should remain, a good source of nutritious food. We do need to protect the environment (including the soil) by diversifying our agricultural base and adopting farming techniques that reduce our dependence on oil.

We should also invest heavily in education as the cornerstone of our future innovation and prosperity.

The second message that must be made clear is that taxation is the price of civilization. We are getting the politicians we deserve. We vote for people who consistently promise lower taxes and better services. The evidence of this lie is all around us in declining health and education statistics and a growth in inequality.
A fair society requires a higher level of taxation and tax should be assessed in a manner in which wealth pays more. Tax evasion and avoidance kills. If you think this statement extreme you should get out more.

A society is safer if individuals have a stake in that society. Monetary and broader economic policy should have full employment as its primary goal.

Collective bargaining and regulated labour markets deliver higher incomes to working families. The evidence is there. Say it boldly, then regulate for it.

Privatisation transfers wealth from all of us to a few of us. Privately run companies are not intrinsically or evidentially better run than public entities.

Equality of access to quality public health and education services is a marker for a fair and just society.

These are the main areas for policy, backed up by international research. A new Government must act according to its policy and be honest with the voters.

Labour and the Greens should demonstrate early this year that they will work together to govern in the peoples interests.

There is nothing to be gained by petty politics. It turns people off and keeps them away from the ballot box. Forget about the 24 hours news cycle – it encourages ad hoc policy, tabloid reactions and personality politics. People want a more just and fairer society – don’t discourage them by acting for perceived short term political gain- it creates further disillusionment.

Stop demonising the opposition – it convinces no one and only serves to make politicos feel better momentarily. Prime Minister as Voldemort? Really-give it a break. ‘John Key must go’ – by all means, but many of us remember the price we paid when we got rid of Muldoon without paying too much attention to the economic alternative. Concentrate on a positive future for New Zealand and model the behavior that might make people proud of their leaders.

The price of not offering a real social and economic alternative and opting for a lighter or softer neo- liberal policy framework is evidenced almost everywhere in the OECD. Labour and Social Democratic Parties are not convincing anybody that they can deliver real change in peoples’ lives because they are defensive and have become apologists for a failed economic model. In Europe, many unemployed young people and the working poor are turning to right wing nationalist parties with anti- immigration and racist policies. This is a political vacuum left by the inadequacy of the social democratic response.

It is time for a beautiful nation of creative and enterprising people in the South Pacific to once more take a lead. Be bold and direct.