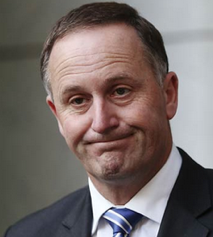 As was predicted, Key’s response  to voter turnout to the asset sales referendum has been dismissive and derisory,

With “only” 1,297,281 voting papers returned,  Key was obviously unimpressed,

“Well the numbers don’t look like they’re that significant. I mean at the moment it’s sitting at around about 40 per cent.“

Key added that the number was ” not absolutely amazing, it’s not overwhelmingly opposed“.

Considering that 1,058,638 people voted for National in 2011, does that also mean that Key is dismissive of National’s electoral support in 2011 as “ the numbers don’t look like they’re that significant“; “not absolutely amazing“; and not “overwhelmingly opposed ” to the Labour Party’s anti-asset election campaign?

Because from where I stand, 238,643 more people participated in the  asset sales referendum  than voted for National, two years ago.

I’m sure 1,058,638 National voters would be unimpressed at the suggestion that they “don’t look like they’re that significant “.

That’s the trouble when a Prime Minister casually describes nearly a quarter of the country’s population as not “significant”. That’s a lot of people to dismiss out of hand.

And a lot of aggrieved voters.