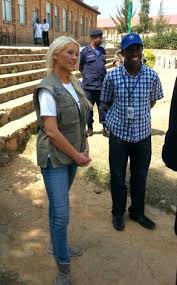 For a long time, I’ve had mixed feelings about the role of Western celebrities in Africa. I’ve never been entirely comfortable with it, but I’ve acknowledged that there are pros as well as cons. I’ve been prepared to take the bad with the good. But, now I’ve had it. Christina Aguilera, you have tipped the balance. You are the final celebrity straw. And now my position (for what it’s worth) is unambiguous: it’s time to get the celebrities out of Africa.

Almost all major charities these days and, even more so, the UN humanitarian organisations are linked with celebrity names and faces. It began, of course, with Bob Geldof; the Irish rocker who formed Band Aid, famous for its hit single, “Do They Know It’s Christmas?”, which raised money for the 1984/85 Ethiopian famine response.

The world’s response to the Ethiopian famine was historic. The simultaneous efforts of Geldof and the BBC’s Michael Buerk awoke the Western world to the horrors of African poverty, causing a profound and lasting change in the interest Western governments and citizenry have in the continent and, crucially, the amount of money that they give it.

It was also an historic lesson in marketing; it demonstrated to charities the attention that celebrities could give to their causes and, perhaps ironically, it also showed the famous what value charity could add to their stardom. I’m not suggesting that Bob Geldof was driven by his ego; even though his status as a humanitarian now dwarfs his musical legacy, I believe his heart was in the right place. Some others that have followed in his footsteps (George Clooney or Bono for example) also demonstrate a convincing level of commitment to African issues.

But, whereas a handful of celebrities have founded their own charities, invested a lot of their own time and money and advocated for change based on their own ideas, the majority appear more likely to be riding the African issues bandwagon. Now, there’s nothing wrong, per se, with a celebrity lending his/her image in the aid of a good cause and they should not necessarily be dissuaded from doing so, just because their knowledge on the subject is limited or their passion moderate. But, practically speaking, the use of celebrities raises big problems.

So, back to Ms Aguilera, who last month travelled to Rwanda in her dual role of ambassador for the United Nations’ World Food Programme and – I’m not making this up – spokesperson for Yum! Brands (the company that owns KFC and Pizza Hut). When talking to People magazine, Ms Aguilera all too innocently revealed her real motives, saying that “the trip came at a time when I really needed to step away and connect with bigger issues in the world”. The children of Rwanda are no doubt, truly gratified that they were able to help her out.

Now, I don’t really care what Christina Aguilera’s real intentions are, but selling the idea that doing something good for Africa is a nice way to feel good about yourself is downright offensive. It cheapens the noble act of giving charity and plunders the dignity of those who receive it. As African issues blogger, Natacha Nsabimana (www.africasacountry.com) put it, “Africa: helping white people who’re a wee bit down-in-the-dumps feel better about themselves since 1884.”

The use of celebrities leads to, at best, a serious watering down of the issues and, at worst, the spread of misinformation. The latter is visible at both ends of charity celebrity history. Whilst Geldof and co may have done a huge amount to raise awareness and money, they also presented an image of Ethiopia (and Africa, more generally) that is mostly incorrect. Contrary to what I grew up believing (thanks to Geldof), Ethiopia is not a massive dry desert. It is, in fact, one of the greenest countries on earth (where things do grow and rain and rivers do flow). And Africans, even in times of severe famine, do not just sit around in the sun helplessly starving. Rather, they are staggeringly resourceful and hard-working in their attempts to overcome the odds they all too often have to face.

Most well-informed people would now agree that the television images of 1980s Ethiopia have done a lot of damage, but fast-forward to the modern day and little has changed, except that Africa is no longer portrayed as a place of famine, but a continent of violent conflict. Christina Aguilera has again been ever so helpful here, with People magazine describing her trip to “war-torn Rwanda”; a frankly outrageous slur against a country that has not experienced war for nearly 20 years.

Africa continues to face huge challenges. It is even arguable that things in Africa are getting worse rather than better. But, Africans – like anyone else – do not deserve to be misrepresented, nor do they merit undignified charity. Being portrayed to the West through tabloid rags and celebrity press does not raise awareness of their issues, so much as cheapen them. It’s time for the celebrities to step aside.