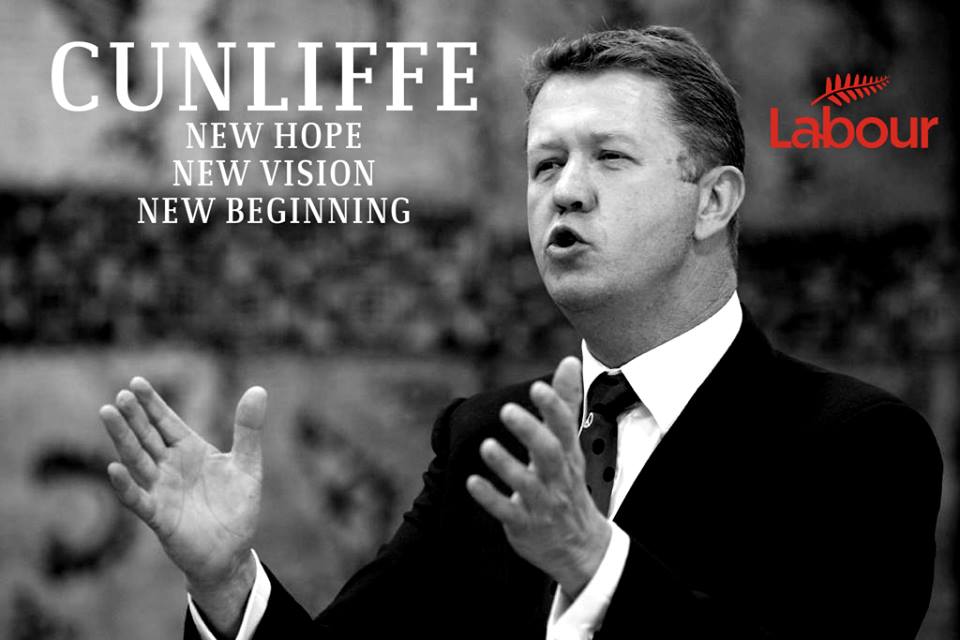 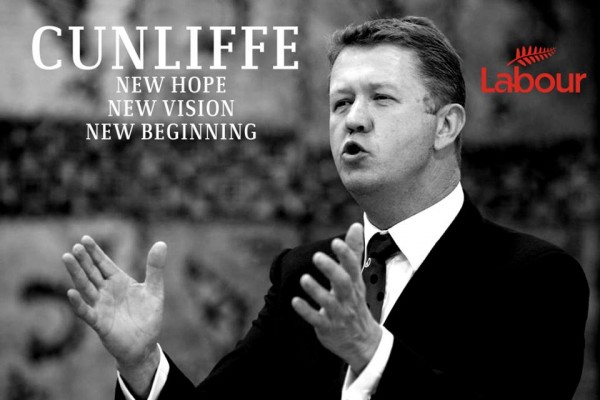 In the winter of 2000, Helen Clark faced a ‘Winter of discontent’. It was the corporate masters of NZ threatening to derail the economy if Helen progressed with her social policies and economic reforms. From that moment, Helen backed down and downgraded to mere management of NZ for 9 years rather than any real structural change.

For the Greens, Labour and MANA, the possible winning of the 2014 election is only the start, progressives must force through the change they want in the first 100 days and then spend the next 2 and a half years defending those changes.

Cunliffe needs to live up to the expectations of the passions he is about to unleash if he hopes to win, and if he misses out, the ABCs will assassinate him. There’s no motivation like ‘this is Sparta’ to focus the political mind.

In terms of the narrative structure for the 2014 election, Labour need to claim the word ‘rebuild’. It is active, it is positive and it acknowledges the sense that under National something very NZ has been allowed to slip away. That the egalitarian self belief we hold onto is as cheap and as compromised as our 100% Pure slogan.

You get the idea of the power of that word.

The agenda Cunliffe needs to consider for the first 100 days should be:

-Repeal of anti-union laws and giving the Unions real teeth
It’s not good enough to promote a Living Wage and the repeal of the crap labour laws National have pushed, the next Government needs to give Unions real teeth. One of the few mechanisms to counter inequality are Unions, empowering them has to argued from the good of NZ and in those terms allowing Unions to negotiate awards across all industries and allowing Unions to strike in sympathy with other Unions would go some way to rebalancing industrial negotiations in this country.

-Capital gains tax, death/estate duties and a higher tax rate on the rich
There has to be a fairer tax rate that penalizes property speculators, forces the wealthy to pay more tax and redistributes a large chunk of that wealth when the wealthy die. A progressive Government is going to have to fund their social programs some how.

-Universal Student membership, universal allowances and full resourcing of adult education
Students are doing it tough and a universal student allowance so that they are not drowned in debt is a responsibility. Bringing back universal student membership is important and those who recoil from their fees going to lefty associations can always apply to have their fee given to a charity of their choice rather than the association. Adult education is a vital thread that binds the lonely and gives adults real opportunities to bond and learn new skills. The gutting of adult education by this Government was a terrible crime for all those who have benefitted from it.

-First $10 000 tax free, reversal of social welfare reforms and giving working for family tax credits to beneficiaries
Tackling poverty through carrots rather than sticks is a must.

-Halt discrimination of family members caring for sick and disabled
This has been a horror story that needs to end.

-Revoke the GCSB and TICS legislation
This will be an election issue, and any progressive Government coming in must revoke these vile mass surveillance laws.

-Massive re-investment into the Regions
Regional tax incentives will help our productive regions in NZ generate more wealth, but the most important thing that could help the regions is high speed internet.

-Faster ultra fast internet roll out and passing of the NZ Digital Bill of Rights
One of the most important infrastructure investments a progressive Government needs to look at is high speed internet. This would future proof the economy while eroding the digital divide.

-Radio NZ 2, the resurrection of TVNZ7, the creation of RNZ TV and transferring News & Current from TVNZ to RNZ
If you have a hostile corporate media attacking everything you attempt to do between 2014 and 2017, you better provide balance to that media landscape with genuine public broadcasting. Beefing up Radio NZs budget to run RNZ2, RNZ TV and make them accountable for news and current affairs within TVNZ so that TVNZ are merely the carrier of the news rather than the created of the ratings dominated tripe it’s descended to are all smart moves. Without real public broadcasting, Gower, Espiner, Armstrong, Vance, Garner, Hosking, Smith, the entire editorial teams of the Herald and Dom Post etc etc etc will decimate the new progressive Government.

-End of Private Prisons
They are an anathema to progressives.

-Maori inequality
It was the ‘closing the gap’ policy by Clark that generated the massive racist backlash during the Winter of Discontent. The universal application of welfare focused on those at the bottom are going to benefit Maori most. Personally I’d want to see real progress made on constitutional change that would cement the Treaty into a more permeant feature of our Parliament. I think some type of symbolic change is also necessary, replace the Lords Prayer by the Speaker with some solemn Oath to uphold the principles of the Treaty.

-Equal pay and 50-50 gender split for Government boards
If women are going to advance beyond second class citizens, the glass ceiling needs to be shattered and the female cleaner who has to clean up the shards has to be paid equally. Private business always decry the lack of talented woman to step up onto boards, promoting them through the ranks into Government boards provides the training and career path direction for those women to gain the experience necessary to step up.

-Mass investment into Green economy
The Greens need to be around the Cabinet table and their plans to Green the Economy are vital for NZs long term future and our long term economic success. Making 100% Pure as aspirational as possible should be the focus of the Greens.

-Feeding the kids
If a deal is cut with MANA, they would need a policy win and feeding all kids in decile 1-3 schools would be the price.

The first 100 days of winning the election are the only 100 days any progressive Government gets, Labour + Greens will only get one shot at this, they can’t afford to miss.