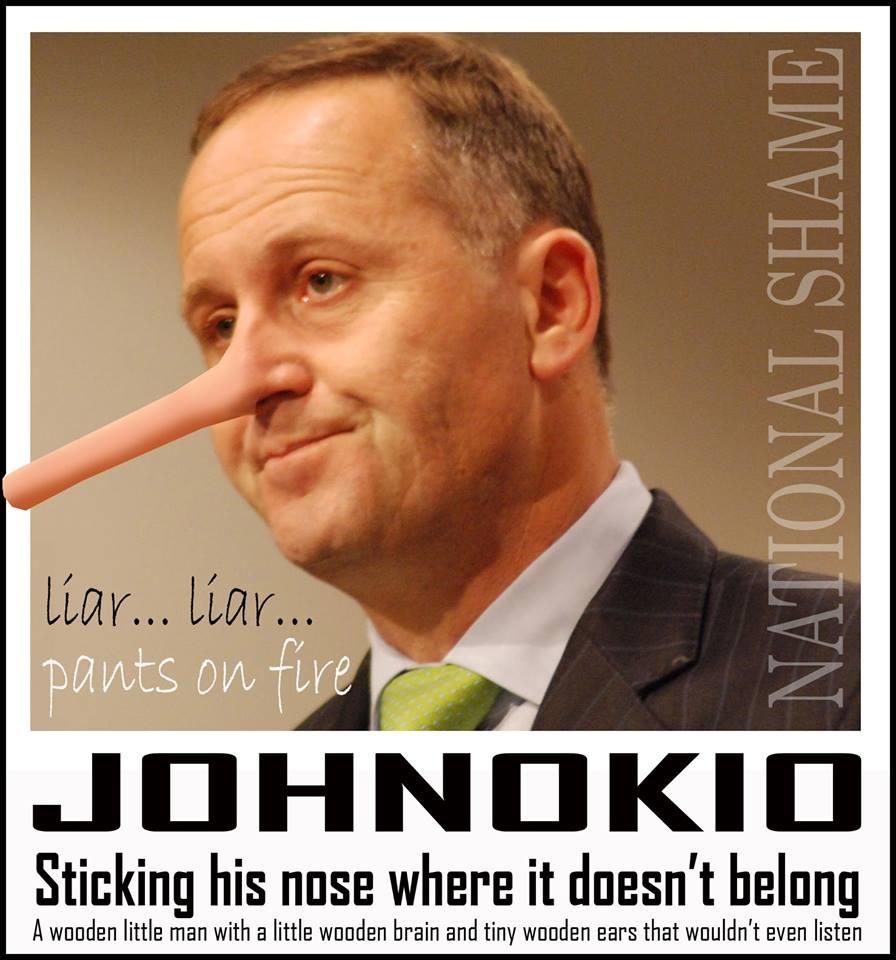 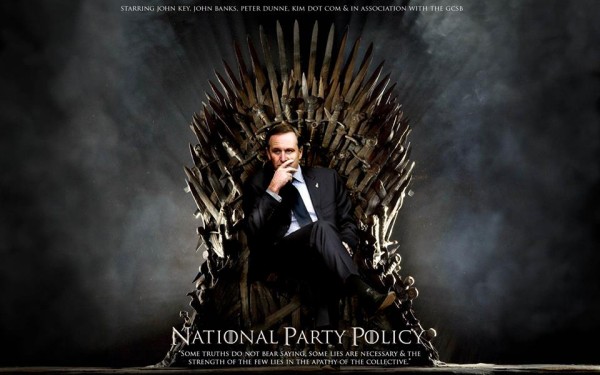 Johnfrey on his Throne of Words

“In the course of the interview he said incorrectly that under the bill, the GCSB would not be allowed to look at the content of communications when conducting their cyber-security functions. In fact, there is nothing that prevents it from doing so.” So reported the NZ Herald on the actual content of the Key/ Campbell showdown on the GCSB Bill. Not the form, not a review of the PM’s silver-tongued, masterful debating skills, not John Campbell’s ass-whipped trouncing but rather, the content of what the Prime Minister said and its resemblance (or not) to the actual, factual truth of the matter.

There is a word for such ‘misstatements’. It’s a word politicians are not allowed to use in the House. It’s the opposite of the truth, aka a lie. On primetime TV, the PM lays before the country the reassuring case for amendments to legislation that has met with opposition from the New Zealander of the Year to Microsoft. It’s a waterproof-case, compelling even. Just not based in fact. Just untrue. Just a lie. Aside from this minor detail of untruthiness (as Stephen Colbert might say), all is well and good.  Or as a Duchess says in Alice in Wonderland : …”put more simply — “Never imagine yourself not to be otherwise than what it might appear to others that what you were or might have been was not otherwise than what you had been would have appeared to them to be otherwise.”‘ Could anything be more straight-forward? The PM, except for being wrong, is right. Except when it does allow the GCSB to look at the content of communications when conducting their cyber-security functions, the proposed legislation does not allow such a thing. And so it was that in New Zealand, by Prime Ministerial decree, night became day, black became white (sounds like a nice idea for a flag!) and 2 + 2 equaled 5. The PM’s pledges (to the NZ Herald) that all will be well. That the legislation does not actually say this means we have to take Key at his word. But as discussed, from the PM’s mouth,  words, silver or otherwise have an increasing tendency to mean whatever he says they mean.

Key’s performance, like that of his Government, would put the Mock Turtle to shame such has been the “Reeling and Writhing and then the different branches of Arithmetic- Ambition, Distraction, Uglification and Derision.”.  Just as National clings to claims of 100% Purity like a dog with a proverbial bone, it proposes amendments to the RMA under which,  according to Rod Oram,  ” the environment will take its chances alongside economic development, landowner’s rights and other considerations.”Amy Adams judges water cleanliness not by actual water cleanliness but rather by the amount of money her Government spends on water cleanliness. As I write, central New Zealand is still rocking from a very unsettling swarm of significant earthquakes. Will oil drilling proceed on this very fault line? What could be (un)safer? The asset sale programme has proved such a winner that we are now minus a strategic asset as a nation and those fortunate few who had the readies to invest have yet to see the share price return to the IPO of $2.50. Luckily, the Meridian sale can now proceed because that corporate pauper Rio Tinto has just been bribed $30m of tax-payers’ money to stay on for another 18 months. There’s nothing National can touch without it turning into a ‘saga’, ‘scandal’, ‘fiasco’, ‘imbroglio’ ‘debacle’ or ‘cock-up’. I’m reminded of Ralph Nader’s book Unsafe at Any Speed. Rod Oram’s piece in the Sunday Star-Times was entitled ‘Full Speed Backwards’ so we are in an even more dire predicament.

Heads have started to roll at Fonterra and four enquiries have been announced to probe what went wrong and how baby formula and botulism became intermingled. It’s an excellent question but with the vested interests and reputations of  various highly paid executives, Government officials, Cabinet Ministers and the country’s economy at stake, one wonders what level of probity will be plumbed or tolerated. We have the PM’s word on this as well that we’ll get to the bottom of things. Ahem. All I can say is it’s lucky no botulism has yet been discovered in snapper, which has become the fish of the day in more ways than one thanks to Primary Industries Minister Nathan Guy’s primary school efforts at portfolio management. With the dairy industry on notice, the meat industry still recovering from the embarrassment of an inability to do proper paperwork, Guy courts more controversy now with fish quota.  In a wonderful act of protest cross-fertilization, a group of protesters picketed and pelted the PM’s Parnell mansion with dead fish (not snapper one presumes) to prove we did in fact care about the GCSB Bill.  Perhaps we have discovered New Zealand’s very own version of shoe-throwing to express disgust: a wallop in the kisser with a dead fish! We could do worse (although it must be said many people are going without quality protein at the moment. Yesterday, the PM wasn’t one of them!). More bottoms will be got to as well with the Privileges Committee’s investigation this week into who leaked a report into an inquiry of an inquiry. In the end, one hopes all will be revealed and we will we be able to tell our Kibblewhites from our Kitteridges.

Tonight, an impressive line-up of speakers will address a gathering in the Town Hall about the GCSB Bill. Some are politicians, some German internet pirate squillionares. Perhaps they have an axe to grind. But what of the others? What vested interest could they have other than the preservation of democracy and the rule of law? Do such things matter anymore in a country where the more the lights go out, the more brightly the Government’s poll numbers shine?  Even that left-wing rag the National Business Review has been consistent in its criticism. Up is down. Black is white. Except when it’s not, the PM’s word is gospel.

On a brighter note, gay marriage also comes into effect today. I’d wager future generations will look back on this as National’s greatest (only) achievement as a Government, the result of a conscience vote where National actually voted with a conscience. This momentary lapse of reason, inspiring and historic, only brings all its other bogus programmes and marginal mandates into a sharper, disquieting focus, as through the looking glass darkly.