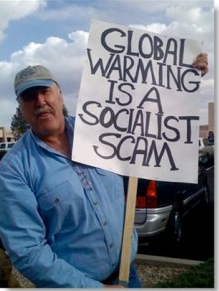 The news is bad. Really bad. I usually try to avoid the word “catastrophic” in association with climate change or global warming, but in this case I’ll make an exception. The latest news from the Arctic is that we may already be committed to warming that will trigger a huge release of methane from permafrost in Siberia and Canada. Methane is a much more powerful greenhouse gas than carbon dioxide, and the consequences of a large and sustained release will be truly catastrophic. Forget trying to cut emissions to stay under two degrees of warming, we’ll be fighting to stay alive on a planet gone wild.

Not that you’d learn that from what you might laughingly describe as “the other side of the climate debate”. Allow me to take you on a tiki tour of La La Land by drawing your attention to two articles that popped up in my browser in the last few days. The first comes from Australia’s Quadrant magazine — a title with pretensions to academic credibility, but instead wedded to the wilder shores of right wing politics and — of course — climate denial. The headline says it all: The Age of Global Warming is Over. The author, one Paul Collits, doesn’t exactly hedge his bets:

Many people will argue that my own conclusion—that the age of global warming is over—is wrong, or at least premature. The beliefs will go on for a time, and the pieties will continue to be recited. But this is merely the echo chamber of mutual support in its death throes.

To which I can only respond: “look North, young man, look North.”

Over at site that rejoices in the title American Thinker, we find an even more outrageous rejection of reality. For Jeffrey Folks, global warming isn’t just over, we’re heading into a new ice age.

What America is facing with global cooling is year after year of crop failure, higher heating bills, and general inflation (as the effects of higher food and fuel prices ripple through the economy).

As you might expect, there is only one solution:

The best way to prepare for this crisis is to unleash the powerful forces of the free market, thus creating prosperity for all and putting our nation in the position to prosper no matter what.

As Swift put it, “there’s none so blind as they that won’t see.” In this case, the blindness is transparently ideological — a rejection of reality because it doesn’t coincide with preconceived notions. For the writers at Quadrant and American Thinker, that’s their job. They must take the libertarian free-market agenda and portray the world through that lens and no other. If the world won’t oblige by matching their desires, they’ll just ignore it.

This sort of madness is all too obviously on display in New Zealand. From Rodney Hide’s strident climate denial to the posturing of our little band of climate deniers as they try to prove that New Zealand’s not warming by taking thermometers to court, NZ’s right wing is so far out of touch with reality that they render themselves politically irrelevant.

We should be banging on the doors of our politicians, begging them to read the science and work out the implications of what we know now. We need to be planning to survive warming, not treat it as a minor inconvenience — or as something that might not happen. The siren voices from La La Land are pure political poison — and must be treated as such.