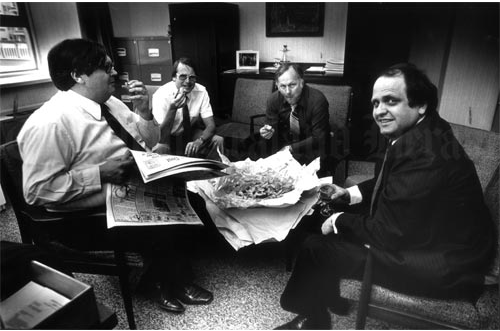 HOW IS IT EVEN POSSIBLE to have a “Labour Right”? Why would right-wingers join a Labour Party – or, indeed, any party of the Left? Surely the term is oxymoronic?

Daily Blog readers might be surprised to discover how many New Zealanders respond to the notion of a Labour Right with disbelief. Very nearly every person who places themselves on the right of politics (and if the latest polls are accurate that’s roughly 50 percent of the electorate!) tends to dismiss the whole concept of right-wing left-wingers as nonsensical.

If pushed, some might concede that Roger Douglas and Richard Prebble were converted to right-wing beliefs while they were still members of the Labour Party. But, they would argue, the very fact that both of these “Rogernomes” eventually abandoned Labour for ACT merely proves their original point that “right-wing left-wingers” are a contradiction in terms.

On the other hand, for those nurtured in the many and varied parties of the tiny New Zealand communist movement, it is a matter of ideological fact that the Labour Party – like all social-democratic parties – cannot contain anything but right-wingers. This is because, historically-speaking, such parties have served as both the apologists for and rescuers of capitalism. By their very nature, therefore, they are right-wing parties.

Between World War I and the consolidation of Nazi power in Germany, it was the position of the Communist International (Comintern) that social-democracy was actually among the most devastating of capitalism’s political weapons. Renaming it “social-fascism”, the Comintern instructed its member parties to direct the major part of their campaigning effort against these social-democratic competitors for the working-class vote. Even in the case of Germany, where the virulently anti-communist Nazis were making steady gains, the Comintern was unrelenting: the “true enemy” and the “real danger” lay in social-fascism – not national socialism.

It was only in 1936, after the Nazis had effectively destroyed the second-largest communist party west of the Urals – and the German Social Democrats – that the Comintern finally relented and issued instructions to its followers around the world that they should now join forces with social-democratic and labour parties in so-called “Popular Fronts” against the fascist/Nazi menace.

It was this alliance of communism, social-democracy and liberal-democratic capitalism (preceded, it should not be forgotten by Soviet Russia’s two-year “non-aggression pact” with Hitler’s Reich) that won the Second World War. Even in the United States, citizens were encouraged to stand in solidarity with their “heroic Soviet allies”. Hollywood even made movies in which communists were cast as the good guys.

Here in New Zealand, the Communist Party’s (CPNZ’s) numerical strength had, by the end of the war, grown to more than 2,000 card-carrying members. Most of these were concentrated in the trade unions, but there were many others scattered through the public service, the universities and the professions. Throughout the war the Labour Government led by the austere and ruthless Peter Fraser had no more staunch body of supporters (and enforcers) than the CPNZ.

But, with the coming of peace, the great wartime alliance began to fall apart – and with it the cooperative politics of the Popular Front. By the end of the 40s, the world had entered a “Cold War” of bitter rivalry between the capitalist, US/UK-led “Free World”, and the totalitarian socialist states of the “Communist Bloc”. Throughout its final three-year term, between 1946 and 1949, Labour found its easy dominance of the New Zealand working class challenged by a highly motivated and extremely well-organised political movement to its left.

Labour responded by mounting a vituperative red-baiting offensive against the CPNZ and its allies. Encouraged by the right-wing press, Fraser and his henchmen went after the communist-controlled unions – most infamously, the Auckland Carpenters. The legal strategies of de- and re-registration of dissident unions, which the First National Government would later use against the Watersiders in 1951, were pioneered by Fraser’s Labour Government during the Carpenters’ lockout of 1949.

Fraser was not merely determined that Labour should have “no enemies to its left”, he was equally concerned to present as small a target as possible to his enemies on the right. In the English-speaking countries particularly the parties of the centre-left went to extraordinary lengths to distance themselves from the new communist enemy.

This overwhelming desire NOT to be seen as representatives of the far-left was undoubtedly what led, Fraser, who had been jailed for speaking against conscription in World War I, to cause consternation and division within Labour ranks by initiating (and then energetically backing) a 1949 referendum on the question of compulsory military training in peacetime. Fraser got his way (the “Yes” vote was 78 percent) but only at the cost of driving many of Labour’s most principled and conscientious members out of the party.

Not surprisingly, perhaps, in the light of its new right-wing trajectory, the First Labour Government was voted out of office in the 1949 General Election.

National was quick to capitalise on the political possibilities of the rapidly intensifying Cold War. By picking a fight with the militant unions, National cleverly forced Labour into adopting a humiliating position of neutrality. Asked where he stood on the deepening dispute, Labour’s new leader, the timid Walter Nash, infamously declared that Labour was “neither for, nor against” the locked out Watersiders. It was a statement which the militant core of the New Zealand working class would never forget – or forgive.

Nineteen Fifty-one was also the year in which the Labour Party felt obliged to remove from its aims and objectives its longstanding commitment to: “the socialisation of the means of production, distribution and exchange”.

THE “LABOUR RIGHT” was, therefore, not merely a product of the electorally-driven need of social-democratic and labour parties to differentiate themselves from the more radical (and now politically unacceptable) communists to their left. It was also (and for that very reason) synonymous with the dominant, parliamentary wing of the Labour Party. The push to the right in Labour has always come from the top.

The one exception to this rule was Norman Kirk’s Third Labour Government (1972-74). Though deeply conservative on social issues, Kirk was a radical when it came to economic policy and foreign affairs. Such radicalism from the top of the New Zealand Labour Party was unprecedented in the post-war era and Kirk’s prime-ministership was very quickly deemed unacceptable – not only by the New Zealand establishment, but by its much more powerful Anglo-Saxon mentors. Kirk’s government came under enormous behind-the-scenes pressure almost from Day One, and its ultimate fate, like that of its sister governments in Chile and Australia, served as a grim reminder of what happens to those labour and social-democratic parties that fail to keep their socialist impulses and traditions under strict control.

The imposition of “Rogernomics” in the mid-1980s demonstrated how well Kirk’s successors had absorbed the lessons of 1972-74.

It’s easy to forget that in 1984 Margaret Thatcher and Ronald Reagan were barely halfway through their reigns, and that the Cold War was threatening to explode in a planet-wasting nuclear Armageddon. There were Cruise missiles in Germany and Russians in Afghanistan. Just a year earlier, in 1983, the British Labour Party had gone to the electorate with a manifesto promising to nationalise the “commanding heights” of the British economy. In the New Zealand Labour Party there were many who regarded that as a very fine idea.

Unfortunately, there were many in the National Party who were worried that their leader, Rob Muldoon, might also be thinking that full-on socialism was the answer to New Zealand’s problems! Lest a maverick leader of the populist right open the door to another Kirk, it was vital that Labour’s leadership be persuaded to follow Fraser’s example and drive the party sharply to the right.

Labour’s leadership clique needed little prompting. There were those in the Labour caucus who favoured taking New Zealand in the direction of Scandinavian social democracy and thanks to the charismatic leadership of its young president, Jim Anderton, the Labour Party rank-and-file was primed and ready to support them. The party’s leader, David Lange, and his coterie: Roger Douglas, Mike Moore, Richard Prebble and Michael Bassett; were acutely aware that one false move could see their faction unseated and their careers ended.

This was the context in which Treasury began whispering its neoliberal promises into the ears of Labour’s dominant faction. With the state apparatus guaranteed to weigh-in behind them, Lange and his allies had only to hold the left of the Labour Party at bay until after Muldoon’s snap election. Once the voters had placed the full powers of executive government in their grasp, the party’s left-wingers would be powerless to stop them.

THIRTY YEARS LATER, and the same patterns are repeating themselves in the Labour Party. The Cold War may be over, but the global financial crisis and rapidly rising levels of poverty and inequality are creating a clear opening well to the left of the failing – but still dominant – neoliberal regime. Parties to the left of Labour are threatening to lead New Zealand through that opening, and in order to avoid neoliberalism’s powerful policing mechanisms being deployed against them (as they were against Helen Clark’s government between 2005 and 2008) Labour’s parliamentary leadership are, once again, preparing to drag their reluctant and rapidly dwindling party, kicking and screaming, or, maybe, not making any protest at all … to the right.