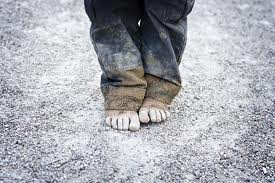 Watching The Vote this week it became clear: I need Christine Rankin in my kitchen. She reckons that she can feed six people for a week on $20. While there are not six people in my house, and no young growing minds, if she can make 126 nutritious meals for $20 – a remarkable 16 cents per meal – she is the kind of kitchen goddess I need. I’m not poor but I am down with the idea of saving money. Perhaps I could have Hannah Tamaki as well in my home, and do away the need for those pesky electricity bills. Apparently all I need to do in winter is cuddle under a sack filled with radiating love, the kind of glorious love that fills Destiny Church. At this point, Bob McCroskey could ride on in on his fancy unicorn and rustle me up a happy family unit and we could all cuddle together.

The episode of The Vote this week was interesting because it tapped so clearly into the notions of the deserving versus undeserving poor. While television is a medium that due to the nature of its emphasis on commercial priorities is not really geared to examining complex issues at length, this particular episode was fascinating for the way that it exemplified the reductive dichotomies that shape our discussion of poverty in this country. Cue the highly emotive (and biased) opening sequence where we are introduced to a young boy called Jason who is abused by his parents. The question was is poverty or parenting the main problem? There was no preface that outlined the results of the reports, or even the links between poverty and violence and abuse. This made for a somewhat tedious debate – clearly there are upper class people that abuse their children, making the proposition easy to refute. But it also had the effect of demonizing people who are poor who are clearly trying to look after their children. The resulting vote of 63% in favour of the proposition that it was parenting that was the problem was hardly surprising.

But what are the actual statistics? Is it truly possible to feed your children on the 37 cents per meal or the 16 cents that Rankin later changed it too (as she stated, Weetbix goes a long way). The nutrition costs estimated by the Food Cost for Human Nutrition by the University of Otago in 2012 were $29 for the basic meal requirements for a one-year-old child, meaning that Rankin appears to be advocating malnutrition and starvation as a solution for our nation’s children. While she did state that she based this amount on the estimates that she has seen, she did not state her source. Rankin appears to be completely out of touch with the contemporary cost of food.

According to Family First’s Bob McCroskey, poverty was the result of relying on loan sharks and spending money on the wrong things. I have known solo mothers who have had little more than $5 over in their weekly budget who have not spent their money on the wrong things, so the link here appears to be somewhat spurious. It totally makes sense that if you are not economically literate, or if you receive a big dental, power or car bill that you might approach a loan shark to keep your household afloat after you have been turned down by banks.  The problem he further identified of sending money back to the islands appeared to narrow his assertions to particular racial groups and then undercut his assertion that the problem is the breakdown of families (sending money back, after all, is an act of looking after one’s family).

Destiny Church’s Hannah Tamaki’s assertion that poor families could all sleep together under the same blanket cuts against doctors’ recommendations as it promotes the sharing of infectious diseases, further adding to the 38,000 admissions that doctors saw in 2011 from overcrowding.

Finally, the proposition that Espiner kept forwarding of poverty not necessarily being linked to abuse (this was of course the link that the programme began with) was really underdeveloped (not unsurprisingly). The same Child Action Poverty Group Report that McCroskey kept citing to assert that there was no link between poverty and abuse cites this as a key aggravating factor.

While the debate had some important additions – most notably Celia Lashlie’s explanations of the affect that poverty has on families, it demonstrated how much as a nation we need to move towards understanding poverty rather than castigating people who are poor through stereotypes.