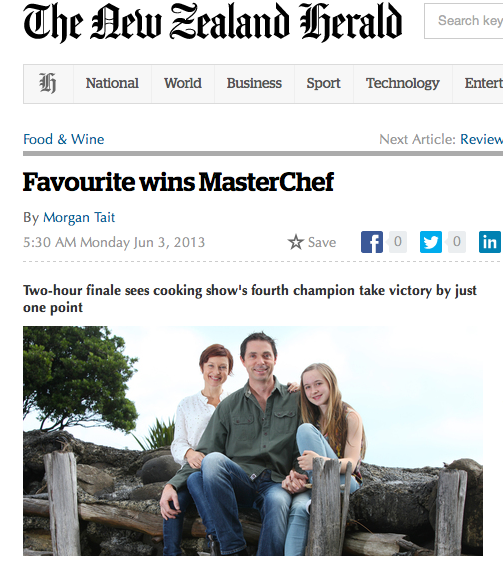 Favourite wins MasterChef
A yoga-practising IT consultant from Raglan has been crowned winner of MasterChef New Zealand 2013 when Aaron Brunet outcooked runner up Paula Saengthian-Ngam by just one point in last night’s grand final.

Brunet, 45, had been the favourite throughout the show’s 17-episode schedule, beating hundreds of hopefuls and 15 other finalists.

His culinary prowess secured him more than $100,000 of prizes, including a Skoda Superb luxury car, $15,000 of designer kitchen appliances, $5000 in kitchenware, a year’s supply of wine, $20,000 of groceries and an exclusive cookbook deal.

In the two-hour finale aired last night on TV One, Brunet and Saengthian-Ngam, 35, faced a taste test before cooking three complex dishes comprising a three-course meal.

No matter how it goes in, all food tends to come out the same way. Let’s remember that before we get too precious about it shall we? This isn’t a review about the minutiae of cooking techniques and heating requirements for the perfect melding of this ingredient with that because I didn’t watch the series or much of the final as I channel surfed, it’s more about the societal context this TV show plays in.

I think of those cold homes when MasterChef screens. I think of those children who will never taste any of the food that is so desperately and frenetically worked on with all the middle class angst of getting your kid into the best private school.

Do they in spastic jealous frustration ever lick the TV screen?

I wonder what competitive kitchen challenges championed by neurotic leafy suburban chefs juxtaposed with the hatred vomited out by racist cartoons attacking those who can never afford to eat those dishes says about us as a society?