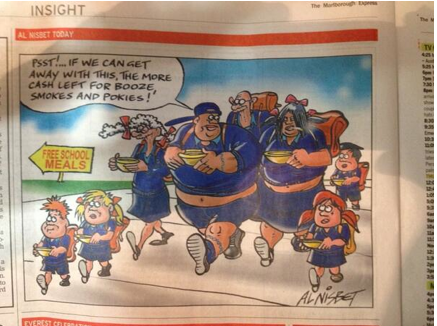 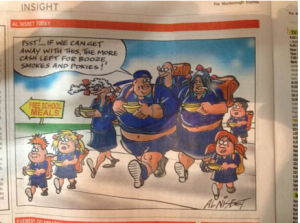 I often get caught by surprise at the depth of racism in our society.

At the same time we see so many generous acts of solidarity and support regardless of race.

As a young man I was somewhat infected by a belief that things would always get better. That seemed true for living standards and democratic rights for the 1960s and 1970s and continued into the 1980s. Racism appeared to be challenged, women’s rights being advanced, gay rights would inevitably follow.

The Springbok Tour and its aftermath appeared to shatter the crusty old colonial racism of the then Muldoon led National Government.

Maori in particular seemed on the march. The Land march in 1975, Bastion Point and Raglan occupations, the Hikoi to Waitangi.

But that progress has been reversed in many real respects or given a conservative twist as the establishment opened the doors to some Maori while excluding the vast majority from the fruits of its “civilisation”.

In the last few decades working people as a whole have been pushed backwards. Levels of poverty have doubled from 10-20% of the population using a consistent measure. Child poverty rates are nearer 25% of all children. Unemployment rates of 5% are considered a “success” when the rate was virtually zero for most of the half century from 1935-85.

At the same time Maori and Pacific unemployment rates are more than double those of workers who are Pakeha.

Paying a miserly billion dollars over a 20 year period to “settle” all outstanding claims is a joke. The loss by Maori in real terms is many hundreds of times that figure. $1 billion is a little over 1% of this years government expenditure. Over the 20 year period since it began it would equal 0.1% or less.

Maori were victims of a colonial holocaust that sought to extinguish them as a people with their own land, language and culture. But Maori refused to go away.

The system that was established by the colonial settler state also found it useful to have Maori as a cheap, reserve agricultural labour force. After world war two Maori and Pacific workers joined the new factories of South Auckland and Porirua – before those factories and jobs were destroyed again in the 1990s. Out of exploitation and oppression a new resurgence of Maori emerged.

But racism remains real and pervasive. A small but telling example was provided on Campbell Live recently when they got a Maori male and a Pakeha male to try and buy petrol from 5 pre-pay petrol stations. Same clothes and car. The result was infuriating but we knew it was coming. The Maori was asked to pre-pay in 4 of the 5 stations. The Pakeha was allowed to fill their car at all 5 without pre-paying.

The daily humiliations and indignities like the petrol station episode are bad enough.

But then there is the institutionalised racism that sees Maori make up 50% of the prison population but only 15% of the general population. Maori know why.

The cumulative impact is obvious.

The same (but opposite) is true for the health system. Rather than more attention you get less. For example – Maori males are much more likely to suffer heart disease but get treated at a rate that is far less than the prevalence of the disease would indicate.

Capitalism has an extraordinary ability to use each and every difference between people to justify unequal treatment (and of course pay).

Insofar as working people accept the prejudices used to justify this inequality they do themselves a disservice.

I do not mean that workers who are white don’t get a “better” deal than workers who are brown. That is a fact in life. I have a “better” chance of getting a job. I have a “better” chance of being given a flat. But if I start thanking my boss or my landlord for my good fortune in life I will end up on the wrong side of history. But more than that even in the more short to medium term I believe we damage our own economic and social interests by thinking the privileges are worth “protecting” by siding with our masters against our fellow workers who are struggling against inequality.

It is not by sucking up to our “betters” that we move society forward. It is only by unity and struggle by ordinary people against all reactionary ruling classes – including our modern-day capitalist ones that social progress has been made. Only struggle progressively brought the working day down from 12 to 10 and then eight hours. And it is our failure to struggle that has seen the working day put back to 12 or more for many workers while many others can’t even get 8 hours work. Only struggle forced a welfare state to be established. Only struggle gave the right to vote to women.

The reason we are going backwards today is because the union movement (and the broader labour movement) was housebroken. Our party (Labour in the 1990s) even became an instrument for our enemies. Demoralised and disoriented we often fell into the trap of blaming someone easily at hand for the trouble we faced rather than the system.

We are not taught to think in class terms by our education system and never will be. It has to be learn’t through struggle. If we can’t see who is profiting from unemployment, recession, slashing wages, and cutting welfare – the ruling rich- then we will fall for what seems “common sense.”

While I am blaming someone else for my problem I am treating it as a personal failure that I don’t have a job or my kid has missed the education he deserves. It may be because someone else has a “unfair” advantage but it is still personal problem. I aren’t blaming “the system”.

Where this leads is demonstrated by the position of working people who are white in the southern United States and occupied Northern Ireland.

The poorest sections of the working class of Great Britain and Northern Ireland is that situated in the North of Ireland. One section is Catholic and is marginally poorer than the other section which is Protestant. They are both in that abysmal situation because the working class which is Protestant thanks that defending its “privileges” over it Papist enemy means it must support the British imperial order and its state rather than fight together with the even poorer Catholic neighbours against the rotten system that is condemning them both. Imperialism’s ability to cut off this northern enclave also held back progress for the liberated southern part of the island.

The same has been true in the Unites States. A hotel housekeeper in New York state gets $20 an hour under a union contract. A worker in Mississippi and other “right to work” states in the southern USA is lucky to get $5 an hour and no union representation.

The reason for the difference was a system of racial separation and terror that was allowed to be established in the South after the defeat of the slave holders in the civil war. In the process chances of interracial unity and struggle was set back for generations.

With adult male suffrage after the Civil War hundreds of thousands of blacks and a similar number of poor whites registered for the elections. Prior to the Civil War, landowners were the only social group who had the privilege to vote, excluding the majority of poor, landless whites from active political participation. Freed slaves and poor whites cooperated in establishing radical regimes in the South that began to pass laws in favour of labour rights, free public education, hospitals, roads and modest welfare measures. These regimes were eventually overthrown by force once federal troops were withdrawn and the Klu Klux Klan established as a terrorist militia to enforce racial segregation. It is this legacy that still lives in the continuing inability of the US trade union movement to ever establish itself as a serious presence in the former slaveholding states in the South.

The overthrow of radical reconstruction was a gigantic defeat for Black people in the USA but it was also the biggest defeat suffered by the US workers movement and has crippled or restricted its progress ever since.

The left has to take these prejudiced views seriously. They are wrong. They can be refuted with facts. Genetics has confirmed we are all essentially the same. Ignoring prejudices however will not make them go away.

But we can only really defeat them when we are struggling together. It’s hard to hold a grudge against the Maori, Islander, Immigrant or “welfare cheat”: who is holding a placard beside you on the picket line and getting battened by the same copper who is battening you. But if we don’t struggle then the cancer will keep eating away at what I believe is our more fundamental human character – solidarity.

But if the human and social organism is not nourished by solidarity then cancerous mutations – fascism being the worst historical example – can emerge victorious.