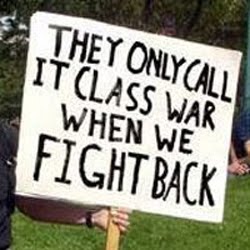 My first post for The Daily Blog back in March was a plea for more of us across the left to engage with each other on the big questions of our time, with thanks to all of you who contributed feedback.

At around the same time, a group calling itself Political Organisation Aotearoa – a ‘collective experiment in political thinking and organisation’ appeared in the local blogosphere.

I welcomed the new initiative and its 11 founding theses with genuine enthusiasm.

I figured any contribution towards deepening our thinking and debate with each other across different strands of the left is likely to be useful at a number of levels.

However, what quickly struck me about this new POA grouping was that there was no way from anywhere on their website or blog of identifying who the people are who make it up.

This lead me to wonder about the whole question of anonymity and why these obviously thoughtful, hopeful types would go to all the trouble of establishing a collective aimed at ‘creating opportunities for debate, alliance formation, and the organisation of political interventions with others’ without giving any indication of who they were.

I found this so extraordinary that I offered to write a paper for POA, which they welcomed and subsequently published here.

I won’t go through it all here, as you can read my article at your leisure, if interested.

However, in summary, some of the key questions I raise include:

I have to say that after a lifetime’s involvement in left politics in Aotearoa, I still believe that if we don’t know who each other are, it’s very hard to form the relationships so necessary to enhance and deepen both conversation and movement-building.

POA has since diligently and attentively responded to my article.  Richard Meros (a pseudonym) wrote this piece, and the collective itself offered this substantive rejoinder.

Some of their key points, highly summarised, include:

I realise this discussion may seem a bit rarified and irrelevant for some, but for those of us who are keen to engage with each other I think the opening up of this debate is an example of what more of us on the thoughtful left – of any stripe –  should be doing about a number of difficult but critical questions facing us today.

For me the most important question of all is ‘how do we better build a strong left counter hegemony grounded in class, feminist, Tiriti and ecological justice –  in the face of neoliberalism and capitalism rampant and the global climate, resource depletion and financial crises?’

While a debate on ‘anonymity’ may on the surface of it seem a trifle distant from that question, in fact at some levels I believe it also lies at its heart.

Questions of political self-confidence, how we cope with the reality of everyday threats to job security in a time of high unemployment,  the nature of leadership and how best we make transformational rather than reformational political change are all key discussions we need to keep fomenting.

So I welcome the discussion I’m currently having with the anonymous friends at POA, and hope others might take an interest too.

I look forward to any feedback you might have.