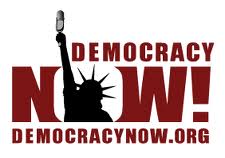 In an age where TV current affairs are now a dead joke served cold at 7pm weeknights on TV One, you take your wins where you can get em, and Democracy Now! hosted by Amy Goodman & Juan González is a win.

Playing 10.30pm Tuesday-Friday on Face TV, Sky 83, Democracy Now! is considered one of the best Independent News shows available with a host of lefty media awards that would make Noam Chomsky jealous…