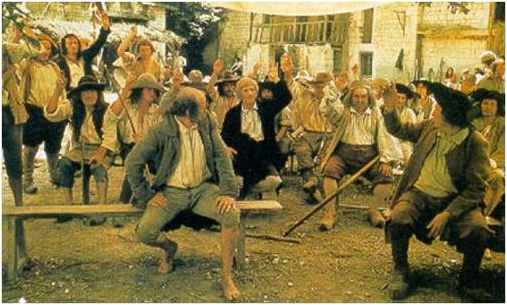 BETWEEN MARCH AND APRIL of 1789 the people of France were asked to do something quite extraordinary. By order of their King, Louis XVI, Frenchmen from all walks of life were asked to discuss and register their biggest concerns. These were collected in Cahiers des Doléances, Registers of Grievances – which soon became abbreviated to Cahiers – the Registers.

In the Eighteenth Century, French society was organised along feudal hierarchical principles. At the summit was the “First Estate”, made up of the aristocracy. Below them stood the “Second Estate”, made up the Catholic clergy. And, below these two, relatively tiny, groups was everybody else – the “Third Estate”.

The French parliament, in which all three groups came together in “The Estates General”, had not met for centuries. But Louis XVI, desperately in need of money, and facing what we would recognise today as a “crisis of legitimacy”, called upon his subjects for assistance. The Estates General was summoned, and each of the three divisions, Nobility, Clergy, Commons, was asked to present the King with a register of its grievances.

These were many and varied: government waste and corruption, the level of taxation, the depredations of the aristocracy and the shortcomings of the clergy. In the end, however, it wasn’t the common people’s answers that provided the impetus for the French Revolution of July 1789, it was the fact that they had been asked to provide them.

People sneer at the whole idea of “consultation” today – not because people don’t believe they should be asked about matters that affect them – but because, in their direct and repeated experience, their answers are almost always ignored.

But imagine the effect on ordinary people of being asked to list their grievances by the Government itself. In a world where, for centuries, the opinions of ordinary people had counted for nothing, being asked to participate in the life of the nation would be, quite simply, a game-changer. An acknowledgement, by those who ruled the state, that what ordinary people considered important had suddenly become very important indeed.

By calling for the Cahiers des Doléances, Louis XVI had, unwittingly, set his people in motion. And the transition from subject to citizen, once begun, would prove to be as revolutionary as it was irreversible.

SO WHY DON’T WE do it again?

In her Daily Blog posting of 30/4/13, Laila Harré states, provocatively: “When it comes to both power pricing and labour laws, National’s move from the equivalent of “détente” to “first strike” has given other parties permission to take much clearer sides.”

I couldn’t agree more. The question is: How to step away from the neoliberal consensus on employment relations without provoking the same hysterical response that greeted the release of the Labour-Green energy policy? The answer, I believe, is by making the “taking of much clearer sides” the exclusive responsibility of the people most directly affected.

At no time in New Zealand history has the legislation regulating labour relations ever been drafted according to the clearly expressed wishes of working people themselves.

The famed Industrial Conciliation and Arbitration Act of 1894 was the work of urban liberals who had, only four years earlier, been given a frightening taste of how potentially unsettling large scale industrial disputes could be. It banned strikes and lockouts altogether and left the settling of intractable disputes to a legally binding Arbitration Court. The Industrial Relations Act of 1973, and the Labour Relations Act of 1987, were both the product of trade union bureaucrats and Department of Labour officials. The union-busting Employment Contracts Act of 1991 was essentially drafted by the Business Roundtable, and the Employment Relations Act of 2000 was written by Helen Clark and Margaret Wilson with advice from Ken Douglas and Angela Foulkes.

Historically, workers have simply been informed that ‘these are the structures you will work within’ and have had to either like it or lump it. The nearest New Zealand has ever come to “bottom-up” trade unionism was during the flurry of occupational self-organisation that followed the passage of the 1936 legislation making union membership compulsory.

Not surprisingly, trade union organisation (or disorganisation) by legislative fiat has encouraged working people to take a rather fatalistic attitude towards the whole business. ‘The politicians giveth, and the politicians taketh away. Cursèd be the name of the politicians!’ tends to have been their entirely understandable approach. (Except in 1991, but that is another story!)

Now, just imagine a trade union movement – or something like it – that has been designed by working people themselves. A movement arising out of a vast consultative undertaking – on a par with Louis XVI’s Cahiers des Doléances. An exercise which the government of the day has not only promised to New Zealand workers, but which it has also pledged to turn into law – even if they come up with answers confounding its expectations. A movement which working people know to be theirs – because they, and they alone, have made it.

Such a movement would be as hard to destroy as “The Rights of Man and of the Citizen” that the French Revolution brought into being. A people-made, bottom-up labour movement which could only be dismantled by the Right at the cost of dismantling democracy itself.

SUCH AN EXERCISE would require thousands of facilitators and recorders: people specially trained to organize and record the responses of workers in enterprises large and small across every industry.

Millions would need to be spent on a multi-media campaign of information and discussion – at least as much as is currently being spent advertising the MRP float and the National-Maori Party’s “Constitutional Conversation”.

Delegations could be sent to union-friendly nations all over the world to see how other working people organised to assert and defend their rights. The findings could then be turned into videos and fed directly into the consultation process.

The results of this huge exercise in direct, participatory democracy would ultimately be drafted into a Charter of Workers Rights – to be either ratified or rejected in a binding referendum. If ratified, the resulting legislation would be entrenched in the manner of the Electoral Act: repealable only by a three-fourths majority of the House of Representatives.

Would such a process produce the same revolutionary outcome as Louis XVI’s Cahiers des Doléances?

What I would predict, however, is that if such an exercise were ever successfully concluded in New Zealand, there would in every bulletin of the six o’clock news be a few minutes devoted exclusively not only to “the Markets”, but to the working people those markets were now obliged to recognize – and serve.