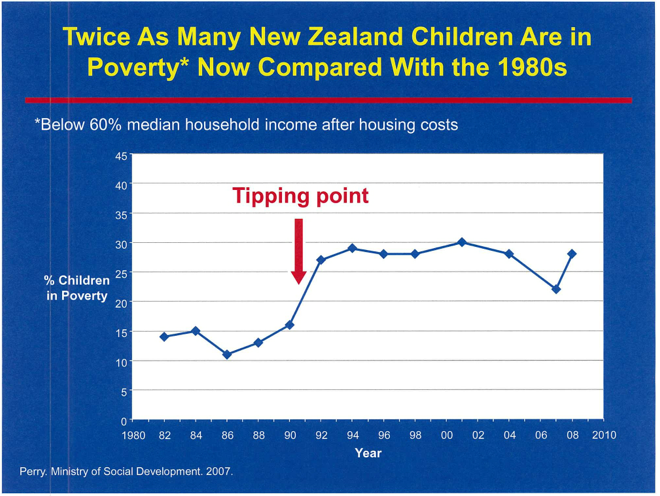 There have been a whole raft of reports over the last few weeks detailing the appalling levels of child poverty in New Zealand. An expert advisory group to the Children’s Commissioner has also spelt out the best means to end it.

Yet the government says it is not even measuring child poverty let alone doing anything to end it. Why is that?

Child poverty doubled in the late 1980s and early 1990s and has basically remained at that level since. 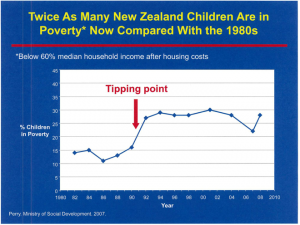 At the time the government imposed economic and social policies that radically increased the levels of unemployment and the number of people forced to live off a benefit – unemployment, sickness, or sole parent. The goal was to break the power of the trade unions and increase competition among working people for the jobs available – thereby forcing down real wages.

The “theory” they went by was that once they had succeeded in increasing “competitiveness” of New Zealand capitalism by lowering its costs in relation to other countries then the economy would begin to grow strongly.

As it turned out the economic decline of those years was followed by an even more moderate growth phase from the mid 1990s on so that we actually fell behind the capitalist competitors abroad and NZ capitalism had a declining share of world exports!

What the government was successful at was lowering real wages and increasing the proportion of GDP going to capital compared to labour equivalent to about 10% of GDP – a value of about $20 billion in today’s dollars.

Households made up for the loss in real wages by working more hours (principally by more women and young people) and going into debt.

A report by Simon Collins in the New Zealand Herald 25/11/06 found that average family income in 2001 in constant dollars was the same as in 1981 despite the fact that the proportion of women working went from 47% to 61% and the percentage of families working 50+ hours a week went from half to two thirds.

Household debt also more than doubled as a share of GDP.

What the government has not been successful in doing is radically decreasing the number of people forced onto benefits. That number has remained high because the “recovery” following the deep 1987-1993 recession was so anaemic. Now we are faced with the consequences of the 2008 downturn and the even weaker recovery following.

What has remained constant is to blame people on a benefit for a situation not of their making. In 1992 the then Social Welfare Minister (and subsequent National Prime Minister) Jenny Shipley said “the welfare state…. produces young illiterates, juvenile delinquents, alcoholics, substance abusers, drug addicts and rejected people at an accelerating speed.” John Key has referred to people “who lack the will or desire to work as hard for their living as fellow New Zealanders.”

The truth was that the numbers of working age people receiving a benefit more than doubled as a direct consequence of the 1987-93 recession not because of a mass psychosis suddenly gripping hundreds of thousand of people who chose to stop working.

Blaming beneficiaries for the existence of unemployment under capitalism has been key to the introduction of policies that have pushed their living standards down to the poverty level and thus their children with them.

None of these cuts were restored by the 1999-2008 Labour government. But to make matters even worse through Working for Families they institutionalised a system of support for poor families that deliberately excluded beneficiaries. In effect they accepted the notion that people on a benefit were less deserving than those working. Their children could be left to rot in poverty.

The Labour government was implicitly accepting the argument that there needs to be a big gap between the benefit and a job to motivate people to work. There is in fact no evidence for that. Sweden has the highest sole parent benefit in the world yet had the highest percentage of sole parents in work. New Zealand had much lower unemployment when benefits were much higher as a percentage of the average wage.

A first step to tackle child poverty is the restoration of the universal child benefit and the elimination of the discriminatory in work tax credit system – as recommended by the Childrens Commissioner’s expert advisory group. At the end of World War Two New Zealand paid the equivalent of 9% of the average male wage per child in family benefit. In today’s dollars that would be about $100 a week per child.

Can we afford it? Of course we can. They could afford it 1945 when average families were 4 or five. Since then productivity of workers has increased enormously. The only problem is how that wealth is distributed.