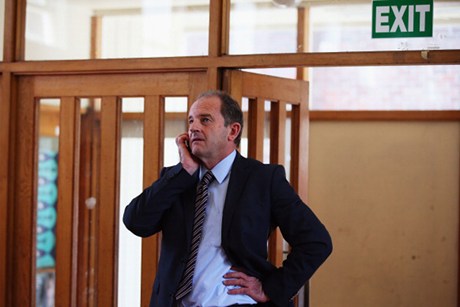 IF I WERE writing the script for a movie very loosely based on the career of David Shearer, it might include the following scenes …..

….. Charles Chauvel, is cornered in a lift by his caucus colleagues Trevor Mallard and Chris Hipkins. They’re telling him to abandon all hope of being rehabilitated in the Leader’s pending re-shuffle.

“And there’s no way back.” Mallard adds, for good measure. “Not for you – or you’re mate Silent-T.”

….. Later that same day. Chauvel is on the phone to Helen Clark in New York.

“I just can’t see the point of hanging around while these guys are in charge.” He tells his former leader. “David has asked me to tough it out; assures me that things will improve; but honestly, I can’t see it.”

“Then you’ll be familiar with the move known as “castling”?

“Good, because I think that’s what you should do now. Step away from Parliament for a bit. Come up to New York. There’s a job that’s tailor-made for you right here in the UN. You’ll enjoy the time out. After all, Charles, Rome wasn’t burnt in a day” …..

….. The scene shifts to a swanky New York restaurant. Charles Chauvel is having dinner with Helen Clark and Heather Simpson. The two women are facing the big picture window that looks out over Fifth Avenue. Charles, his back to the window, can’t help but see the man who enters the restaurant and is shown to a nearby table. Being new to the UN, he fails to recognise David Shearer’s former colleague from the UN Office for the Co-ordination of Humanitarian Assistance. With their backs to the other diners, Clark and Simpson also fail to register his presence – or the fact that he is seated within earshot.

“Everything turned to shit after I left for New York”, Helen is saying between sips of her Chardonnay. “Goff was only supposed to last a year. What the hell went wrong, Charles?”

“The numbers just weren’t there, Helen. We tried and tried, but, after the third attempt all we’d managed to do is piss off the rest of the caucus.”

“It’s all the fault of those ungrateful little bastards, Robertson, Ardern and Hipkins”, mutters Heather, “I told you they were useless, Helen. The wheels of your jet had hardly left the ground and they were already asking: ‘Why not me?’.”

“Yes, well, that was the problem, Helen. Too many of your people refused to stay bought.”

“I know, I know. And that’s what led poor old Chris Carter to try and bring down Goff all on his own. Dear, silly, boy.”

“So, now the Labour caucus is divided into three, roughly equal groups”, explains Charles. “Goff’s and King’s rear-guard of has-beens and Beagle Boys – with Mr Mumbles as their figurehead. David’s loyal ten, and Robertson’s cast of the young and the restless. You must have at least one of the other factions, plus your own, to mount a successful coup.

“And Goff persuaded Robertson to throw in his lot with Shearer?”

“But I just don’t get it!” Helen responds. “Surely the more sensible combination was Cunliffe-Robertson – not Shearer-Robertson. I mean, even a Robertson/Ardern leadership combination, with Cunliffe in Finance, makes more sense than this present mess?”

“Why do you think I’m here in New York, Helen? None of it makes any sense!”

Heather puts down her knife and fork and beckons her companions closer.

“What would happen if Shearer was to be forced out of the leadership by something other than a leadership vote?”

“I would say that because it isn’t mentioned on the Members’ Registrar of Pecuniary Interests,” Charles replies, “it can’t have very much in it.”

“One hundred thousand dollars! In a foreign account! Jesus Christ! We’ve got him!”

The three companions put their heads closer together and begin talking in low whispers.

The man at the nearby table rises unobtrusively to his feet and makes his way to the restaurant foyer. He takes out his I-Phone and activates the number of his old friend David. …..

….. The scene shifts to the Leader of the Opposition’s office in New Zealand Parliament Buildings. David Shearer is softly singing The Hotel California – accompanying himself on his own guitar. His cell-phone starts ringing. Shearer sighs, puts down his guitar, retrieves his phone and checks the caller display. He frowns.

“Yeah, yeah, David, it has. But listen-up. You’re in trouble. I’m in a new York restaurant, and I’ve just overheard Helen Clark, Heather Simpson and that new lawyer guy who’s just arrived in town talking about you at the next table. David, they know about your Merrill-Lynch account – and how much is in it.”

“Yeah, very much ‘Oh, shit!’, buddy. And from what the lawyer guy was saying, you haven’t declared it.”

“David, are you crazy! That’s the account with all the donations from your friends in the private military and security companies. How could you be so stupid?”

“Declare it, you idiot – before your enemies do!”

“But, how will I explain not declaring it for four straight years?”

“Buddy, I don’t know. But if I were you I’d think of something pretty quick.”

Shearer pockets his phone, opens his office door and shouts.

Author’s Note: Any similarity to any actual plots and oversights in which the above victims of this political satire were, or are, actively involved is purely coincidental – and the dumbest luck!