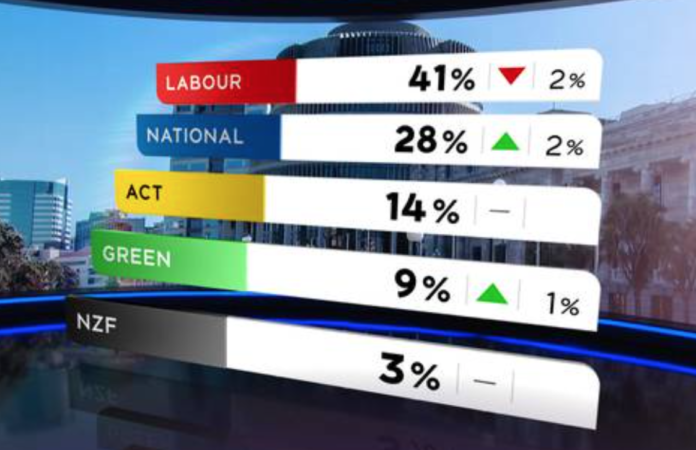 Latest TVNZ Poll is out and despite 3 months in de facto house arrest for our largest city, Labour + Greens STILL hold onto the majority!

They are like an ABBAs greatest hits tour, sure you are sick to fucking death of ‘Dancing Queen’ but fuck me if you don’t get up and dance when it comes on.

Jacinda & Labour: The simple truth is despite all the bitching, all the complaints, all the pain and all the fear of Covid, the majority of New Zealanders stand with the science and stand with the Government DESPITE 3 months of de facto house arrest, this is a remarkable achievement for Labour & Jacinda’s leadership. The past 16 weeks have been the worst in terms of conditions for voters and while moving to level 3 has alleviated that, it will also see a surge in hospitalizations but they will be manageable. If this is the floor of Labour’s support and Jacinda can give the country the Christmas they are begging for, all of the criticisms from the Right and the woke will dissipate and Jacinda will rise in 2022.

Chloe: The Greens are perfect for free the nipple rallies with cycling militant Trans ally mommy bloggers, not so good on the economic neoliberal hegemony. They’ve spent a year harvesting the low hanging fruit of identity politics while doing nothing meaningful on poverty, homelessness or climate change.

Maori Party: Losing half their entire support in one Poll  should surprise no one. The Maori Party have been terrible during the pandemic, offensively describing Labour’s policy as ‘modern genocide’ on par with the ‘Squid Games’ while getting into a fight over racist shoes!!!??? Their bizarre pettiness mixed with the ego of Rawiri has found a barren electoral response from antiVaxx Maori who see the vaccine as evil cracker magic. They have mutated into a cartoonish joke, someone should really get fired for this terrible strategy.

Green Party: 9% at a time when Labour are so open to inequality arguments is an enormous failure. The pathetic COP26 outcome has highlighted the mediocrity of James Shaw and the foolishness of signing up with Labour in the first place. All the Greens have gained for their hollow Ministerships is collusion with mediocrity plus some identity politics wins. The Greens don’t know if they are Arthur or Martha and if they did they would need a 7month hui to discuss pronoun use.

National Party: They continue to languish sub 30% DESPITE all the problems Labour has. National couldn’t get laid in a monkey brothel while wearing banana costumes. They have no clear political philosophy other than ‘we hate Labour’.

The problem for the Right is that National are not benefiting enough and ACT are cannabilizing that vote.

Those who are angry with Jacinda over Covid on the Left are going to the Greens but the majority of the center is staying.

The danger for ACT & National is that all they’ve had for the past 18months is the hope Covid spreads or that Jacinda  gets stuck in a never ending lockdown, that she is on the verge of breaking through all this means ACT & National’s criticism becomes as vapid as the antiVaxxers.

If Labour’s 90% vaccination rate plan works, the bitterness of being locked down for 4 months will dissipate.