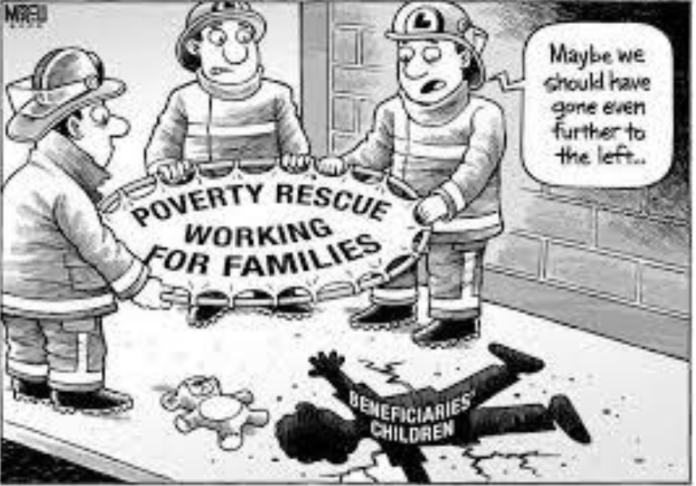 Chris Trotter reaffirms his deeply cynical views of  a Labour government pandering to its  shallow  voting base ruled by self- interest and ignorance.   He infers that efforts by myself and activist groups like CPAG to highlight the plight of the poor and how to fix it may be worthy but are ultimately pointless.

Despite this I can’t stop myself writing about something truly enraging that just arrived via a CPAG OIA of more than 90 pages on the Working for Families (WFF) review. I hope my efforts are not completely fruitless.

What is fundamentally wrong with WFF goes to the heart of Labour’s framing of issues to appeal to its voting base.  According to Chris Trotter this base comprises flighty, disaffected refugees from National; Labour party intellectuals who “inhabit the leafy suburbs” to whom more tax is an anathema; male working-class laborites who don’t want ’handouts to the poor’; and “kind Labour women” who want Labour to talk about poverty so long as they don’t actually do anything. This voting base is donkey deep in neoliberal thinking about the supremacy of paid work. That has not changed for two decades.

In Australia, tax credits for children are simply about children and their basic needs.  But not here. Oh no, child tax credits have to be tied to getting those feckless sole mothers back into the paid workforce regardless of how many children in her care, how disabled or how young they were, whether she was herself sick or disabled, or whether full time paid work was even a remote possibility.

The long promised WFF review has been conducted under wraps, all discussion and meetings in secret and with no consultation, least of all with those affected.  While we can now see from the OIAs the direction of bureaucratic thinking, between the annoying redactions that is, it does not impress with either its vision or basic logic.

The OIA shows that the original framing is being taken as the starting point for the current review.

The essential inconsistency in these two objectives is not discussed although it is acknowledged that the work incentive aspect has not worked out well.  But neither has the poverty reduction goal.

Make no mistake, WFF has nothing to do with ‘low-income earners’ who do not have children. Of course, this group should be encouraged to retrain and get worthwhile employment. WFF is about children and is not for the young unemployed.

Thus for 17 years the numbers of children under the lowest of the low poverty lines (about 170,000) has barely budged. Year after year the MSD has drawn attention to the fact that the WFF made no difference to the levels of child poverty in workless families. But ideologues can’t hear that. They believe, as expressed in Michael Cullen’s memoirs, that WFF was an unqualified success, “reducing child poverty by 30-70% [depending on the measure]” and that those (i.e. CPAG) who say otherwise “misrepresent “and engage in downright falsehoods.”

The confusion of objectives has led to a desperate muddle.  The IWTC is not about rewarding an extra hour of paid work.   Children of parents who work part-time while on a benefit are still deemed unworthy- their parents will have to find a paid job that lifts them out of the benefit system before they qualify for the IWTC. Ironically, if a sole parent got a part time job, the consequent vicious abatement of the core benefit has been a very real and punishing disincentive.

In 2004 David Craig and I wrote a blistering critique of Working for Families for CPAG called Cut Price Kids calling out this stupidity. Over the years the IWTC has had to be modified as its grotesque unfairness became clear to even the ideologues in Wellington captured by the third way mantra that paid work is the [only] way out of poverty.

In the first Christchurch earthquake, the government allowed parents who lost jobs to keep the IWTC for 16 weeks even when they weren’t working. In the last lockdown, the government removed the unjust rules for the IWTC that required 20 hours of paid work for a sole parent (30 for a couple) to get the IWTC. But government couldn’t let go completely of the paid work requirement, creating a further muddle. Today a parent still has to be off a benefit and provide evidence of some paid work or a wage subsidy to qualify.

Getting rid of fixed hours of paid work took far too long and while it was essential in today’s fragmented and precarious labour market, the fundamental requirement that the parent does not access any kind of benefit remains. As we emerge tentatively from the latest lockdown the true extent of the damage to businesses and livelihoods will become clear. The families in most need who have had to go onto a benefit because they are now so poor will also lose this critical payment that is supposed to protect their children from child poverty.

Oh, and let’s not forget the pathetic attempt to make work pay with Minimum Family Tax Credit (MFTC). A family has to be both off the benefit and meeting fixed hours of work to have their incomes topped by the IRD with this oxymoron of a work incentive.  The MFTC can be a very significant state payment worth more than a part welfare benefit, however as it is paid by the IRD is not called a benefit, therefore the family can have the IWTC too.     As if it couldn’t get more bizarrely convoluted, this ‘work incentive’ MFTC has a 101.3% abatement- so the family makes itself worse off by working more.

There is much more to say about this promised WFF review that now seems to be on hold. But what needs to happen first is a redefinition of the purpose of this highly important redistributive programme for children.  It should have a single objective – ie “to support income adequacy and reduce child poverty”.

The design of tax credits should be cognizant of effects on work incentives but not assume a primary role for the tax credits is to provide a work incentive. And WFF must be renamed so that is clear it is about support for our precious tamariki, not about paid work.

The review should be aware of the wide effect on work incentives for the working poor. Because of the muddled policy framing this is never done.  If we care about making work pay, then why do low income parents struggling to get ahead in a hostile business world face such severe work disincentives?  First, student loan repayments at 12% above the low threshold of $20,000. That plus tax, ACC, and KiwiSaver means an effective tax rate of 34.8%. Then, from a gross income of $42,700, the 25% abatement of WFF kicks in, lifting the effective tax rate to 58.8%, rising to 71.3 % above $48,000.  Oh, and for those unfortunate enough to need an accommodation supplement (ie most sole parents)- you can add another 25% to those EMTRS.

Until the review committee rejects the idea that WFF tax credits for children should themselves operate as a work incentive we will continue to wallow around in this morass.

To close on a positive note, congratulations to Chris Trotter for his insightful assessment of the Cullen legacy including the failure of Working for Families for the poorest children:

“Who was he? This son of a London artisan who won a scholarship to the upper-class Christ’s College? This radical history lecturer … who was willing to sell Rogernomics to a confused and dismayed Labour Party? This Labour Finance Minister who left state housing underfunded and beneficiaries’ children unassisted by Working For Families?”