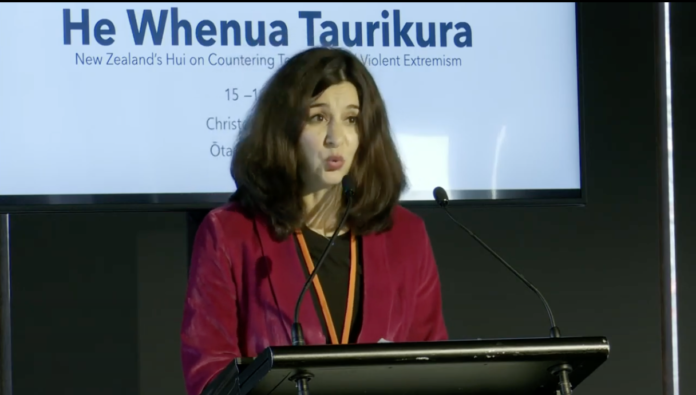 The New Zealand Jewish Council spokesperson Juliet Moses should never have been invited to speak at a counter-terrorism conference in the wake of the terror attack against New Zealand Muslims on 15 March 2019.

As a mouthpiece for the Israeli Embassy, Moses uses every opportunity to make false smears of anti-semitism against the Palestine solidarity movement and anyone who calls for sanctions against Israeli to make it comply with international law. She did this today with her opportunistic attack on Palestinian solidarity protests at the counter-terrorism conference.

Six of those killed in the mosque attack were Palestinians.

Moses has previously expressed deep-seated racism towards Arabs and Palestinians when she refused to take action against another Jewish Council member, David Cumin, who tried to justify Israeli snipers murdering unarmed Palestinian protestors in the Great March of Return Protests in 2018 by saying:

“…violent riots on the border with Israel to which they bring children to use as human shields. The quote of Israel’s first woman Prime Minister sums the situation up beautifully. Golda Meir said: “there can only be peace when the Arabs start to love their children more than they hate us” ”

We approached Juliet Moses to complain and asked her to condemn this racism against Palestinians and repugnant slur on all Arabs because if anyone had said the same thing about Jews she would have quite rightly condemned it as anti-semitic.

“The NZ Jewish Council considers your complaint to have no validity. We will not enter into any further correspondence about it”

Moses is tone deaf to Islamophobia and anti-Arab and Anti-Palestinian racism.