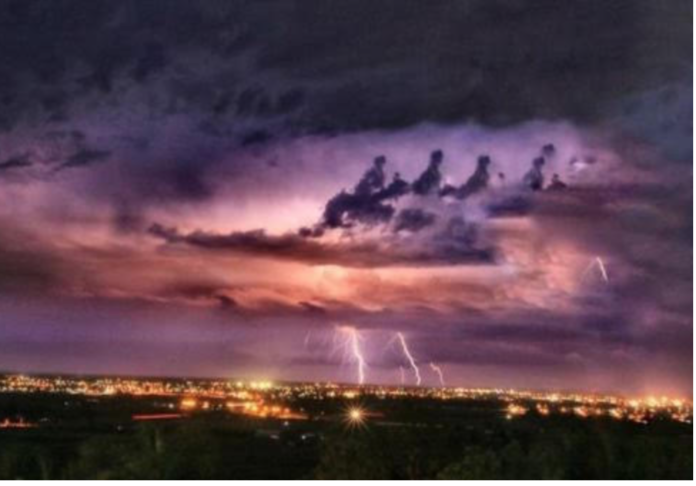 Eschatology is a part of theology concerned with the final events of history, or the ultimate destiny of humanity. This concept is commonly referred to as “the end of the world” or “end times”. – Wikipedia

WHY ARE THE AUSTRALIANS behaving so provocatively towards China? What makes a nation of 25 million think itself the equal of a nation of more than a billion? China’s economy is second only to that of the United States’. Technologically, it is well ahead of the best Australian science has to offer. Militarily speaking, the Peoples Liberation Army dwarfs the Australian Defence Force. Oh, and China possesses its own nuclear arsenal, with rockets and guidance systems more than equal to the task of delivering a 20 kiloton atomic device through the front doors of the Australian Parliament and detonating it on the Speaker’s Chair.

A government would have to be mad to set itself and its people against a foe so huge and dangerous. Unfortunately, madness, might just turn out to be the most robust explanation for the Australian Government’s eschatological diplomacy.

The most likely source of this delusional thinking is the undeniable fact that Australia holds nearly 54 percent of the world’s iron ore reserves. The problem with this figure is that, if China is removed from the equation, Australia’s huge quantities of iron ore could not be absorbed by any other market. Nowhere else on the planet is there anything like China’s demand for iron and steel. The USA, Europe and Japan are essentially sated economies, and the rest of the planet is simply too poor to take up the slack if China suddenly stopped buying – from Australia.

Because, of course, while Australia owns most of the world’s iron ore, it does not own all of it. At a pinch (and Australia has been pinching China pretty hard of late) China could turn to Brazil and South Africa for its iron ore supplies. Yes, it might take Beijing a little while to reorganise its mineral imports regime, but this minor inconvenience would inflict far less harm on the Chinese economy than the collapse of iron ore exports would inflict upon Australia’s.

The Aussies are fond of pointing their accusatory little fingers at New Zealand on account of the Kiwis’ extreme reluctance to offend the largest purchaser of their country’s crucial dairy exports. Truth be told, however, Australia earns an even larger chunk of its export receipts from China than New Zealand.

If Beijing were to impose a ban on the import of Australian iron ore, the economic impact would be devastating. In very short order, Australia would slide into a deep recession, generating political consequences inimical to the incumbent Liberal-National Coalition Government. The likely election of a Beijing-friendly Labor Government would not only bring the diplomatic and economic stand-off to an end, it would also deliver a harsh, but necessary, lesson in the realities of international politics to a (hopefully) chastened Liberal Party.

That’s the hopeful scenario. An alternative explanation for the current madness of the Australian Government is that, within its ranks, there exists a righteous gaggle of evangelical Christians for whom politics is no longer “the art of the possible”, but eschatological: facilitating the Second Coming of Christ.

The prospect of mutual nuclear annihilation was crucial to the refusal of both the United States and the Soviet Union to push their diplomatic competition beyond the point of no return. Neither side wished to see its people incinerated in a nuclear flash, or succumb slowly to the effects of radiation poisoning. Irrespective of their capitalist and socialist ideologies, Washington and Moscow remained essentially secular, scientific and rational. Had they not, the world would not have survived the First Cold War.

Much has changed, however, since the collapse of the Soviet Union, and the consequent ending of the First Cold War, in August 1991. In the United States, the ever-increasing influence of evangelical Christianity over the political process, especially over the Republican Party, has seen the practice of politics become radically less secular, less scientific and less rational. It has also undermined the political system’s capacity to respond self-defensively to existential threats. If the end of the world is perceived as a good thing: as the fulfilment of the prophecies contained in the Book of Revelation; what incentive does a true believer have for trying to prevent it from happening?

It is a sobering fact that between 1995 and 2007 Tim LaHay’s 16 “Rapture” novels repeatedly topped the bestseller lists. In 2016, alone, over 65 million copies were sold worldwide. No less an authority than Jerry Falwell reckoned the impact of LaHay’s novels on American Christianity as second only to the Bible itself. Believers in the Apocalypse look upon the end of the world – and fear no evil.

On 5 July 2005, the Sydney Morning Herald published a story headlined “Politics Goes To Church At Hillsong”. According to the SMH:

“But the 20,000-strong crowd of evangelical Christians reserved their most enthusiastic applause for Treasurer Peter Costello, who received an almighty welcome – just as he did last year”.

Fifteen years on, it’s 2021, and Peter Dutton is Australia’s Defence Minister. His deep-seated hostility towards China is undisguised, as is his belief that some form of military confrontation with Beijing is inevitable. Peter Costello, who lays claim to the title of Australia’s longest-serving finance minister, is currently the Chair of Nine Entertainment Co. – the television network responsible for the rhetorical question: “Has New Zealand become New Xi-land?” (As in Xi Jinping, China’s President – geddit?)

It is difficult to know how New Zealand’s Ministry of Foreign Affairs and Trade is able to deal sensibly with an Australian Government (and an Australian bureaucracy and defence force) in which evangelical Christian eschatology often seems to count for more than the rational assessment of national self-interest and self-preservation that has long guided New Zealand diplomacy.

One can only imagine what China’s politicians and diplomats make of Australia’s eschatological diplomacy. Or of the fact that the Australian Prime Minister, Scott Morrison, is a member of the “Horizon” congregation – a “happy-clappy” evangelical community that just can’t wait for Jesus to win the Battle of Armageddon and carry up the righteous to glory.