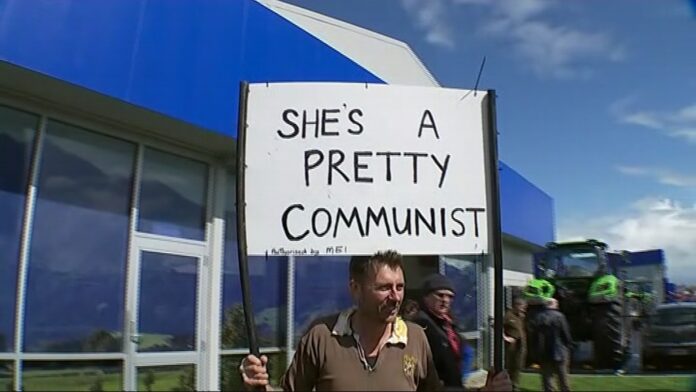 This whole thing about “JACINDA / LABOUR ARE CRASHING NEW ZEALAND OUT OF THE FIVE EYES BECAUSE THEY’RE SECRETLY IN LEAGUE WITH THE PEOPLE’S REPUBLIC OF CHINA – OR WISHING TO BE” meme is ridiculous.

Now, leaving aside the very legitimate points of hesitancy which New Zealand has over, you know, allowing the same five countries which majority-declared that Iraq ought be invaded for possessing “weapons of mass destruction”, to decide via declaration aspects of our core foreign policy for us …

Meanwhile, as we saw not all that long ago – during the previous Parliamentary term in fact – all the outrage from certain corners of the commentariat was about how the Labour/NZF Government was actually seriously jeopardizing our relationship with the People’s Republic of China. Mysterious “definitely not bans” on certain of our key exports to the PRC ensued as a result, a Chinese diplomat made pointed remarks about poking out eyes in our direction, the list goes on.

I suppose you can forgive the PRC for expecting New Zealand to be a pliable little not-quite-ally. After all, it had faced zero opposition getting a *literal PRC spy* elected into our Parliament, who had then proceeded to arrange direct face-to-face contact and photo-ops for prominent members of the Government with the PRC’s head of secret police, etc.

Except … hold the phone ! That didn’t take place under Labour! That took place under National! The blue-coloured, (more-) neoliberal right-wing ‘conservative’ party. Those are the facts, well documented after they came out – and then supplemented by quite the cavalcade of additional supplementary evidence showing a web of influence and influence-peddling going on both under National’s watch and pervasive throughout the National Party itself.

So why is it that we’re only NOW hearing people in certain places jumping up and down about how New Zealand has purportedly – just recently – Sold Our Soul to the People’s Republic of China?

(Which further can’t be the case – if it were possible to do such a thing, the National Party would have (part-)privatized it and hocked it off overseas at the first possible opportunity along with the power-generation assets and the farmland, etc.)

Well, it’s simple. Across the world, a lot of people want to be annoyed with New Zealand and our present Prime Minister in particular. It’s right there in the obnoxious Telegraph piece which kicked off this whole kerfuffle once more – Jacinda is spoken of as “tiresomely woke”, and the headline blares that she (rather personally, which is curious – we are not a Presidential democracy, after all, nor a monarchy … except in exactly the same way the UK is) is the “West’s woke weak link”.

New Zealand has weathered – and continues to weather – the pandemic better than seemingly any other country in the Western world. From afar, we look (and I stress that it is just that – a look. Appearances *may* be bitterly deceiving) to have some sort of idyllic actually-sane-and-rational society all of a sudden (just don’t mention the housing prices). Jacinda has become a domestic symbol in polities across the globe for , no doubt , the sort of people who were once multi-coloured-hair-dye University campus “communists” who these days go about “cancelling” people.

In other words … in the (post-)Colonial Metropoles of yesteryear, they just can’t have it, this business of a *Colony* outperforming the Mother Country or the would-be (still) World Hegemon. It’s an embarrassment! And one doubled down upon when it comes to the sorts of people parading about with Her Graven Image in their own domestic contexts, to boot.

So how to attack Jacinda and our Labour-led Government? Why, it’s quite simple. They’re “Red”. Literally, that’s the party colour – and to a certain sort of (fifth) columnist, Red is quite simply a ‘red rag’ to a bull-scatology-artist. It’s easy (and fun, too!) to portray Labour as being COMMUNISTS – a “pretty communist” as the protest sign in 2017 held aloft by an agrarian opponent of Labour’s had it.

Except how can you POSSIBLY portray a fairly unremarkable in many respects middle-of-the-road modern neoliberal-consensus party as being THE DREADED RED MENACE these days ?

The obvious one would be via the Dancing Cossacks of the Modern Era – and I don’t mean the Muldoon kind, but rather the Reds Under The Bed formenting chaos in one’s domestic elections. The Russians, that is. Except that just wouldn’t fly as applies New Zealand – not that it shall likely stop somebody from printing bizarre contusions about Jacinda the personalized puppet of one Vladimir Putin, the Wellington-based KGB agent once upon a time.

But instead, it’s the PRC confection that’s been chosen for this purpose. Because at least THERE, there might LOOK like some sort of contusion and/or collusion occurring – if you seriously massage the facts so as to outright obviate many of them (and I am thinking in particular of New Zealand’s actual record of statements and engagements in the direction of the PRC over the past two years in this department).

Yet as I say – this is utterly un-about the actual situation of New Zealand under the current Labour administration. At least with regard to our relationship with the People’s Republic of China.

If it WERE about our rather problematic entanglement with the PRC, then we should have heard all about it with reference to the previous shenanigans occurrent under the National Party.

Except we didn’t – because the sorts of people who are these days up in arms about our Labour-led, indeed our Jacinda-led Government … tend to quite *like* the National Party and the sorts of noises *it* makes, so wouldn’t want to embarrass them and thus ‘let the side down’.

So instead, the party which has actually moved us AWAY from our far-too-close and actually-worrisomely-penetrated strangulation-embrace with the PRC, is being castigated for somehow turning us into Airstrip One Of The South Pacific for the impending Sinification of just about everywhere. Never mind how much in the way of political and literal fiscal capital we may have poured into attempting to provide a viable alternative to PRC for the battleground states of the Pacific. Never mind the aforementioned trade consequences for our statements on the PRC’s various ‘controversial’ actions in recent times in Hong Kong etc. Never mind the PRC’s OWN quite vitriolic remarks against us, on everything from our decision to close the border to the PRC in the early weeks of Covid-19 through to our previous concordance with other Five Eyes nations upon PRC-relevant matters. Never mind our own decision to block Huawei from participating in our 5G rollout. Never mind our drawing cordially closer to the Americans, or any of the rest of it.

For it quite plainly Doesn’t Fit The Narrative these chicken-hawk fish-and-chip paper-purveyors wish to broadcast about our country, our sovereignty, our aspirations, our vision, our future.

The contents of those headlines have been weaponized both at home and abroad by people who have just been LOOKING for something, anything, to have a go at what they think our Government represents. The lack of substance almost precisely becomes its enduring appeal – anything you like may be projected out thereupon.

You’re a right-whinger who wants to live-action roleplay Cold War Mk.II Electric Boogaloo? Ok, so wail about how the GODLESS COMMUNISTS are running New Zealand as part of the Sixty Ninth Internationale in confederation with “Red China”.

You’re a more middle-of-the-road sounding Anglosphere sort who secretly yearns for the days of the Sun never setting upon a certain opium-dealing empire? Well then – talk up the notion that New Zealand has quite literally ‘sold out’ both Her own people, and also our traditional mates across the Tasman into the bargain (and scrupulously, conspicuously forget about just how uneven that relationship has been both recently and in the past).

You have some problem with the local SJW brigade wherever you may so happen to be in the world at large? Turn “Jacinda”, the “Tiresomely Woke” “Weak Link” of the West, as the headline blares at you … into the proxy target for your outrage at them kids down the road tone-policing John Cleese. Or whatever it is these days.

Politics, particularly of the popular-elective variety and especially as conveyed through the conventional or even unconventional news media – is effectively an exaltation of the Symbolic over the Real. That’s all it comes down to, in the end. Symbolic choices, some of which may actually bear real consequences – provided the symbol is weighty enough that its bearers come to believe in it themselves.

And soon enough and sure enough – just as the Gulf War Did Not Take Place [to reference me some Baudrillard], or more especially as Iraq HAD Weapons of Mass Destruction … Or At Least, Saddam Was A Nasty Enough Guy That We Were Totally Justified In Rolling Him Anyway –

The ‘facts’ fade away into distant, diffident obsolescence and thence obviation outright. To be replaced with the inestimably more enduring general feeling, general perception, which suborns all else beneath its subconsciously-resonating yoke.

A propaganda campaign, you may say – carried out by none other than those former-yet-future (post-)colonial would-be world masters.

Whether of the Media or the more overt Imperial centers of power. Wherever they may so happen to be.