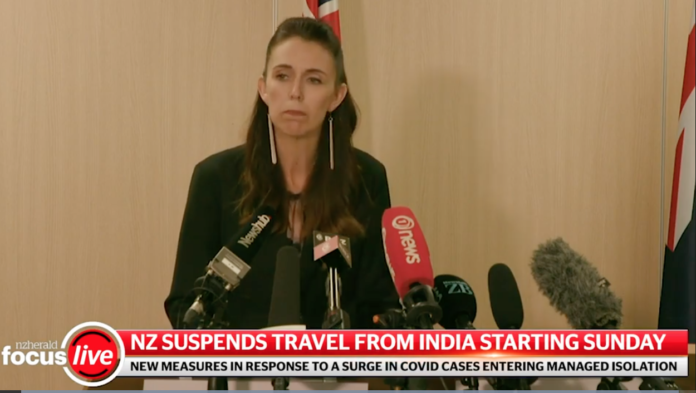 I was just writing about how the surge in Covid cases in India was causing a spike in cases arriving in New Zealand when Jacinda had a press conference and, abruptly, announced that no-one from India would be allowed in until the end of the month.

This is the first time that people from a particular country who are NZ residents have been blocked from returning.  In that sense, it is quite a big deal.  Immediately, some people called it a racist policy, targeting one group when others from high risk countries are still allowed to enter.

So the first question is whether people from India pose a particular risk at the present time.  There are two types of evidence that shows there is a particular risk. The first is that, between 2 and 6 of April, a five day period, over 30 travellers from India who arrived on the daily Emirates flight tested positive on Day 0/1.

That flight is nearly always full, and people from many other countries also board it at Dubai.  With a large number of Cases probably developing in the air, this risk also extends to others on the flight.  No other nationality has anything like the infection rate on arrival.

The second piece of evidence is about cases in the world.  I guess we are all looking to the end of the pandemic, but the reality is that cases are surging again internationally, and some are predicting that a new wave (the third? fourth?) is emerging.  Chief among the resurgence is India, which recorded a record number of cases yesterday, at 115,000, and climbing fast.

There are other countries that are close behind.  Brazil, because the President, Bolsonara, has refused to put public health measures in place, is hitting new highs at around 90,000 cases per day.  While the government might be worried about the numbers in Brazil, I was not able to find any cases of people from that country arriving with Covid over the past ten days.

Frankly, the flight schedule from Brazil to New Zealand would kill or cure you if you had Covid.  It takes up to 66 hours to get here by plane.

France is the other worrying country, with 80,000 cases today and a clear third wave. Again, I wasn’t able to find any evidence of people arriving here from France with a Covid infection.

Numbers are growing again in the US, with around 74,000 cases yesterday.  I found three cases from the US, one testing positive on day one, and the other two on days 12 and 14.

So the surge in people arriving here from India with Covid 19 is not some sort of racist fantasy, but a real thing with significant effects on our quarantine facilities.   The question is, was there anything that the government could do to stem the numbers except close the borders?

I wondered last week whether a number of these returnees were availing themselves of the burgeoning ‘fake Covid” certificate market. But yesterday the Health ministry noted that it was thought that most people who arrived positive caught the virus either travelling through India or en route.

En route for all means transit at Dubai airport onto an Emirates flight which travels daily to New Zealand from Dubai. Is Dubai airport a hotspot for cross-infection? I don’t know.  The number of infections recorded in the UAE is low, but that might be because they keep them all in transit.

Dubai airport does offer rapid Covid testing for a fee, which I suppose is an option.  But given quite a few who arrive here with Covid probably had it at Dubai, how would that play out?  Enforced, and probably costly, quarantine in Dubai? I am sure that travellers would prefer to wait it out in India than go down that route.

Things are likely to get worse than better in terms of Indian returnees to New Zealand in the next little while.  While the Covid soars again around the world, temporarily pausing travel into New Zealand for people where risk of infection is high is a prudent measure, not a racist one.