On 19 January 2021, as the Trump  administration was coming to an end , the US State Department accused the Chinese regime of genocide and crimes against humanity through its wide-scale repression of Uyghurs and other Muslim ethnic minorities in its northwestern region of Xinjiang.

“I believe this genocide is ongoing, and that we are witnessing the systematic attempt to destroy  Uyghurs by the Chinese party-state,” Secretary of State Mike Pompeo stated, adding  that Chinese officials were “engaged in the forced assimilation and eventual erasure of a vulnerable ethnic and religious minority group.”

A difficulty for someone who cares about justice issues everywhere is knowing what to believe, who to believe,  particularly, if the atrocities being cited are being committed in  countries the West declares as enemies , and the accusations come from the West.

We, the public, have been lied to, so many times….lies that have led to massive bombing campaigns and massive losses of life.

Operation Northwoods was a proposed false flag operation, in 1962,  against the Cuban government, that originated within the US Department of Defense. The plan was for the CIA to stage and actually commit acts of terrorism aganst American miltary and civilian targets. The terrorism would be blamed on the Cuban government, giving the US a justification to go to war against Cuba. Kennedy stopped Operation Northwoods from happening.

The Tonkin Gulf of August 04 1964  incident,  led to the US engaging in war on North Vietnam. But the Pentagon Papers and the memoirs of Robert McNamara revealed that the ‘incident’ didn’t happen.

Have we forgotten about the lies told about  Saddam Hussein’s Iraq, about the ‘weapons of mass destruction’ , ‘excusing’ an illegal attack on Iraq that led to  hundreds of thousands of deaths.

Remember the 1990 accusation that Iraqi soldiers in Kuwait removed babies from incubators and left them to die?

What is really happening in remote western China? Where is information coming from? We have no Robert Fisk who lives there and dares to see for himself.

A journalist I highly respect is Max Blumenthal. He writes on the website thegrayzone.com, about an anti-Chinese  right-wing Christian evangelist, Adrian Zenz  whom the West’s media consult as an expert. An article by Max Blumenthal and another journalist, Ajit Singh.

“Claims that China has detained millions of Uyghur Muslims are based largely on two studies. A closer look at these papers reveals US government backing, absurdly shoddy methodologies, and a rapture-ready evangelical researcher named Adrian Zenz.”

You can read more about Zenz.

That’s really all I can add.

I make no claim to knowing much about China.

Yet, considering what the West has done to the people of Afghanistan, of Iraq, of Libya of the entire Middle East really, it is hard to believe the sudden compassion for Muslims in western China.

The lost skill of diplomacy is to try to imagine what the situation might look  like through the other‘s eyes. China is surrounded by hostile military bases.

Other countries in the Pacific region are willing military allies of the US. That includes NZ with its Rocket Lab launch pad. The US has an enormous bloated military arsenal, including an expanding  nuclear arsenal. The US is the only country to have dropped a nuclear bomb,  on another country..an Asian country at that!

There is a positive role New Zealand could, if it dared, to play. New Zealand could dialogue with the Chinese, could express very strong concerns about reports in the western media about the situation in western China. But only if New Zealand transforms itself into an independent, non-aligned country.

Our top priority should be not just to  avoid being caught up in  a nuclear war, but  to vigorously challenge all nuclear nations to dismantle their nuclear arsenals. Humanity is on borrowed time really. The doomsday clock is very close to midnight. 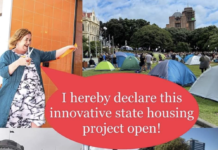