A grim analysis of the Green Party’s latest attempt at social justice by Marie Dyhberg demands some critical consideration.

We all want the court process to be as painless as possible for victims taking part in sexual assault cases and we acknowledge that many cases don’t make it that far and even fewer result in a conviction, but is the answer as the Greens are pushing for, a Spinoff threshold of guilt to convict more men of sexual assault regardless of their guilt?

You will all remember the infamous Spinoff exclusive where they alleged a Labour Party volunteer was sexually assaulted by a Labour Party staffer. It led to Stuff, which subscribes to the ‘if a woman said it on social media it must be true’ school of journalism to launch attack after attack on Jacinda by insinuating that she must have known about the sexual assault and then covered it up. Vance, Mau and even Michelle Duff who had written a book about Jacinda was prepared to throw Jacinda under the bus for fourth wave feminist doctrine.

Unfortunately for the Spinoff and the Stuff Sisterhood of the travelling pants, the story started imploding after the volunteer was caught doctoring her evidence to the Labour Party committee convened to look into this and the Spinoff hid she was actually in a relationship with this staffer.

At least Vance had the decency to apologise and retract her attacks on Jacinda after the story imploded.

If you re-read the original Spinoff witch trial that launched the claim Jacinda not only knew about but covered up a sexual assault, note how the relationship is utterly falsified for maximum damage…

Over the next year, Sarah immersed herself in the party as a volunteer, quickly gaining more recognition and responsibility. It was during this period that she first came into contact with the alleged perpetrator, who is several years her senior, and started to have correspondence and regular meetings with him. He was already established in a leadership position at Young Labour, and his star continued to rise in the party proper.

It was soon clear his interest in her was not purely political or professional, she said. On a party trip in 2017, after a night of drinking, he spent time “coming up behind me, hugging me, grabbing me”, she wrote in an April 2018 email to Maria Berryman, the lawyer leading the review. He also sent Sarah screenshots of explicit private messages exchanged with another party member, seen by The Spinoff, in which the pair fantasised about having sex with her. “I would feel manly if she was on her knees,” he wrote.

…at no point whatsoever do Spinoff note to you the reader that she had been in a relationship with this guy for 8 months!!!

Doesn’t that context change everything and doesn’t the fact that it wasn’t noted to the reader deeply deceitful?

The text message he sent her was sent during their relationship – how does that equate to inappropriate behaviour? That’s the new evidential threshold is it? Sexts you send your Boyfriend/Girlfriend during a consensual relationship?

As The Spinoff story reads, this Staffer tricked a poor defenceless women into his home and was behaving like he was her boyfriend – because he was???

The editorial counter of course is that sexual violence occurs in relationships and just because you had sex with someone doesn’t mean you are consenting again to that, and we all accept that argument, but what The Spinoff did was hide an element of the allegation which completely changes how that story is being told because they believed woke mantra that suggests any attempt to contextualise the relationship amounts to supporting the rapist.

I am, along with a majority of criminal lawyers, both prosecution and defence, deeply concerned about some of the proposed amendments and believe they go much too far. It is vital that complainants feel free to step forward and have confidence in the legal system, but this cannot be secured by eroding the rights of the defendant, who has the right to be tried on all the relevant evidence.

The bill also states that consent to sexual intimacy must be given every time, which no-one disputes, but then stretches logic to say the jury cannot hear about intimate encounters the same couple had previously. With a rape allegation, when the sex is not denied, the trial turns on whether the defendant had reasonable grounds for believing the complainant consented. Where a couple are in a relationship, that belief may well depend on what had been usual and acceptable between them before.

If the belief was unreasonable, let the jury decide, which they cannot do if the defendant is banned from telling his side of the story.

The law already says the complainant cannot be asked about anything that is not relevant. If a lawyer wants to traverse a couple’s sexual background, the judge will close things down if the evidence is irrelevant to the consent issue. That has also been the position for years.

The proposed law will deprive the defendant of a right that in every other area of criminal law is automatic and inviolable.

While it is true that some victims do not come forward because they fear the trial process, it is also true that innocent men get accused, sometimes for very vindictive or perverse reasons.

…The Greens want previous sexual history to be banned from the jury because the only defence to rape is that the man believed he had consent. By removing any context of a history between two people and presenting that to the Jury as a random one off event between people who had no previous connection  the way The Spinoff did will certainly gain a lot more convictions but will the men actually be guilty?

In the post me too subjective rage world where women have to be believed, the anger at the history of sexual abuse never seeing justice has warped the values away from ‘better 10 guilty men walk free than 1 innocent man goes to prison’ to ‘better 10 innocent men go to prison rather than 1 guilty man walks free’.

I would post a picture of Lady Justice here, but apparently she’s been cancelled.. 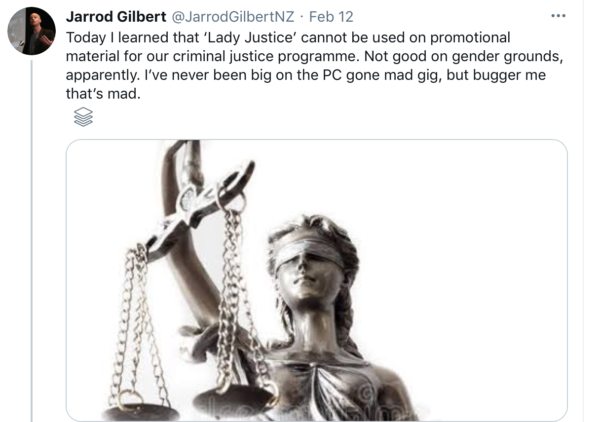 ..welcome to your brave new world where ‘To Kill A Mocking Bird’ was never written.

Once the enormity of these changes are understood by the wider public, parents will stop fearing they daughter being sexual assaulted and start fearing their sons of being accused of sexual assault.

The backlash to this will not be pretty.