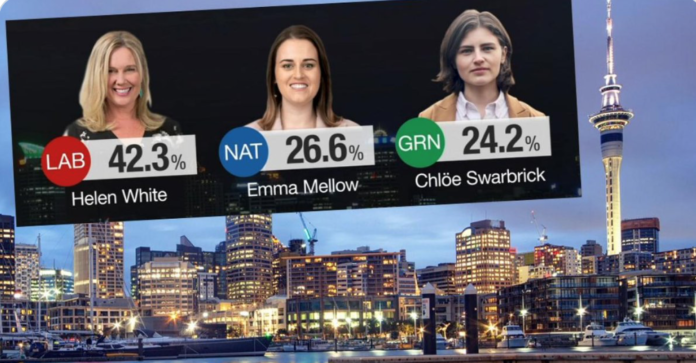 It’s the Battleground special and Newshub have A LOT going on. Simon was very good bashing Billy TK a couple of weeks ago, he’s on fire with very well researched questions, but everything comes to Covid and voters just don’t seem to care about policy no matter how hard journalists ask the questions.

The first battlefield is Northland. The only chance NZ First has of re-entering Parliament is Shane Jones beating a boiled ham like Matt King, but that’s a steep climb because Jones’ verbiage is far too cosmopolitan for Northland voters who are better known for their fear of eclipses and electricity than love of provincial Keynesianism.

This was bourn out by a Northland poll that had Jones coming 3rd, but what was most surprising was Willow-Jean Prime’s incredible Party vote which was 41% to National’s 38%. This is fascinating because if an electorate like Northland is leaning so hard towards Labour,  and that is repeated in other rural and provincial electorates, National is in real trouble.

The debate between Willow-Jean Prime, Matt King and Shane Jones is meaningless because  Covid is all that matters. King will win because this is banjo twanging Northland and even the plague won’t stop them being represented by the National Party, but the Party vote will go to Labour in a manner which will herald the tectonic shift which gives Labour a majority win.

Matt King and Shane Jones refusal to look at cannabis reform shows what tragic dinosaurs they are. I really hope Willow-Jean Prime wins just to give Matt King a smack.

The second Battleground is Auckland Central and they have a Poll!

It’s over for the Greens in terms of hoping Auckland Central could be the safety net if they come under 5% with the awful Helen White riding Jacinda’s coattails.

Labour will gain another tedious middle class Ok Karen candidate, while the Greens are smashed.

This will be deeply disappointing for the Greens and watching another smarmy Labour candidate win will sadden us all.

The only hope is 20% still haven’t decided who they will be backing so if Gaia is listening, vote Chloe because losing her would be a tragedy for NZ Politics.

The third Battleground is Te Tai Hauauru where Māori Party co-leader Debbie Ngarewa-Packer is battling to take the seat from Labour’s Adrian Rurawhe. If there are any surprises to come on Election night it will be in the Māori electorates. The Green Party vote that could go to Debbie will be the crucial part of that possible upset.