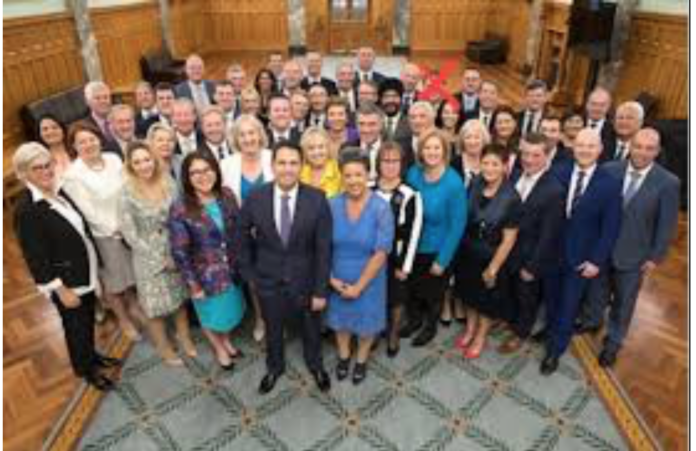 Bernard Hickey has done a very good evaluation of how Labour win the 2020 election, and he has I think zeroed in on a very important dynamic that if employed early will favour a returned Government in 2020.

Cutting an electorate deal early this year to clearly signal that NZ First, Labour and the Greens intend to campaign as a team for the election would ensure that no Party falls under the 5% threshold meaning no wasted vote meaning guaranteed representation and the near certainty of being returned to power.

If they collectively announce this early, they cement in their chances to win, but as Hickey also notes, this Labour team are far too super cautious to try this.

I spent a part of 2016 talking with Matt McCarten about the Labour strategy for 2017 that they ended up using, the idea was to knock out National’s support partners United & the Māori Party to ensure NZ First went with Labour and the Greens, this election however Labour don’t seem to have any of the strategists and tacticians required to counter a resurgent National.

I believe that this Government deserve a second term, they won by surprise last time and Jacinda’s candidacy was a desperate Hail Mary but they still deserve to be returned.

I remember trying to alert senior staff on election night 2017  because I feared they had forgotten that the special votes where the Jacindamania would be seen  wouldn’t be part of that nights count. That information didn’t get through on time and Jacinda’s dour faced sadness was the look of a person who thought they had lost.

This sense of failure meant no one had a plan to govern, so that when NZ First did predictably come on side, they had no reform program for the Wellington bureaucracy, no 100 day plan and a vague feel for something called the ‘Politics of Kindness’.

The toxicity cultures inside WINZ, Housing NZ, Oranga Tamariki and the grotesque underfunding of the social and real infrastructure are National Party legacy that this Government have barely managed to get a handle on.

Add to this the way Simon Bridges conned Chris Hipkins on the first day of Parliament that National had the numbers to stop Mallard becoming speaker and gained larger representation on Select Committees and you had an ill prepared Government crippled by Select Committees that gave them few majorities.

This lack of preparedness has been the major reason there hasn’t been any transformation, and the lack of using Kelvin Davis and Willie Jackson’s personal friendships with Shane Jones and Winston Peters has been why NZ First remains a hand break to more progressive policy.

B-u-t, Labour deserve a second term and we should judge them as progressives and as climate activists on their first 100 day program in a second term.

Winning a second term however is not nearly as easy as Bernard suggests it might be.

For National to win, look for three pressure points.

Cyber warfare: National’s online cyber warfare will be as malicious and as Machiavellian as Trump’s, Brexit’s and Johnson’s using the same micro-targeting to harvest older white males culturally alienated by the current woke mantras. It is a tactic that the Left currently have zero capacity to counter, especially as their online activist base are part of the very same woke alienation that the Right attempt to exploit. This will give National an edge in rallying voters who aren’t currently already voting.

ACT: ACT is like a dangerous fault line that hasn’t ruptured for a long time. As a barely 1% Party, it’s Epsom Electorate win means nothing, however a 1.6-4.9% ACT could deliver anywhere between 2-6 MPs which in addition with National could easily be the means to victory.  ACT’s rise is off the back of paranoid Gun Nuts who the Police are currently making  more militantly neurotic with bullshit raids on right wing gun nut homes combined with the Euthanasia referendum combined with the free speech issue. These 3 issues are giving ACT a dangerous rush of populism that could deliver it a huge influence in the next Parliament. Labour would be insane to attempt to debate the free speech-hate speech changes before the election as their micro-aggression policing woke activists will manage to terrify the bejesus out of the centre as to what the woke consider hate speech.

If ACT rupture and jump to 3%+ we could easily see a National ACT Government.

Maori Party: Part of the 2017 strategy for Labour was to knock out National Party coalition partners. Labour did it in Ohariu by knocking Peter Dunne out with Greg O’Connor and they did it to the Māori Party by recruiting Willie Jackson and taking urban Māori out of the Māori Party. That tactical decision paid Labour a huge dividend by not only winning all the Māori electorates, but also a large Māori vote for Labour in the general seat party votes as well.

Since giving Labour all their representative power however, Jacinda and Grant have not delivered much for Māori in fear of allowing National, Duncan Garner and ZB to play redneck dog whistles. This means when the Māori Labour Caucus go back to their electorates and ask again for their vote a range of issues from Oranga Tamariki, the health inquiry, the victims of abused state care, the 14 500 on state housing waiting lists, the 600+ suicides, poverty and inequality  are all bedrock problems that Labour still haven’t solved.

Add to this symbolic issues that Māoridom take to heart like Ihumatau, ownership of water and ongoing settlement processes, and a resurgent Māori Party has every opportunity to tap into that swelling frustration and turn it into political representation.

All the Māori Party has to do is pump up its party vote by using profile candidates and select one to go head to head in a Māori electorate with the determination to win.

That kind of line up and strategy would see the Māori Party re-enter Parliament with a bunch of high profile Māori candidates and NZ First would refuse to sit in any Government that includes them.

2020 will be close because the truth is that most of NZs elections actually are incredibly close.