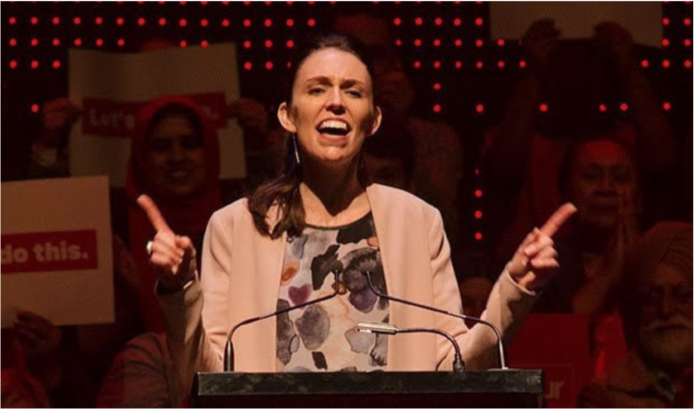 HOW DID 2019 END on such a jarring note of neoliberal bi-partisanship? With the Coalition and the Opposition united in their backing for a lavish spend-up on roads, roads, and more roads? It’s possible the two parliamentary groupings may diverge on the question of how all this bitumen should be paid for: directly by the state, or through Private-Public Partnerships (PPPs); but that’s about it in terms of potential disagreement. The year is ending on an apparently unanimous parliamentary assumption that trucks and cars will continue to provide New Zealanders with their prime means of transportation. With this slavish commitment to the automobile, the country’s political class has demonstrated its near-total moral incapacity. New Zealand’s claim to be taking Climate Change seriously stands exposed as utter bullshit.

Also exposed is Labour’s intellectual exhaustion. By returning to National’s pro-automobile vomit so shamelessly, Jacinda Ardern and her senior colleagues are essentially admitting that they lack the necessary competence to translate their promises of “transformation” into reality. It’s a fatal admission. By acknowledging that the big stuff is simply too much for them they have opened a royal road (if you’ll excuse the expression) along which Simon Bridges and his team can now motor to electoral victory.

Bridges’ script is pathetically easy to write: “National and Labour are in full agreement about what needs to be done in New Zealand. But, let’s be brutally honest, only one party possesses the competency required to do it. From KiwiBuild to the Provincial Growth Fund, the Labour-led Government has proved woefully inept. By the time the election rolls around, New Zealanders will be looking back at three wasted years. About the only things our Prime Minister and her Cabinet are good at is making promises, finding excuses and providing hugs. By contrast, National possesses both the will and the talent to get this country moving again – and that’s exactly what it’s going to do.”

Which is not to suggest that Bridges and his team won’t employ Topham Guerin Ltd to mastermind a complementary social media campaign. If the high road of “competency” fails to inspire, then the low road of crude emotional arousal will be primed and ready for all the traffic it can bear. Indeed, Ben Guerin and Sean Topham may advise Bridges to use both roads – at the same time. They’ve already proved they can do it – just ask Boris!

Labour, the Greens and NZ First could beat this style of campaigning easily – if they only had the will and the talent to get even a little bit creative on the propaganda front. But, that, alas, is where the party falls so woefully short. Unless he or she is being kept extremely well hidden, there just isn’t anyone in Labour’s ranks who even remotely fits the description of “a little bit creative”. How could there be? The culture of the Labour Party in 2020 is hardly what you’d call welcoming to the swashbuckler and the maverick. Its ideologically rigid and puritanical apparatchiks simply wouldn’t know what to do with a political gunslinger like Ben Guerin.

Even if Jacinda intervened on behalf of the 2020 equivalent of Bob Harvey – the young swashbuckler who somehow persuaded Norman Kirk to take a punt on him in 1969 and who then proceeded to transform the public’s perceptions of both Labour and Kirk by deploying state-of-the-art advertising techniques – it’s doubtful he or she would last the distance. Ideological Orthodoxy and Art have never been the best of friends.

Which only leaves Jacinda, herself, to take on the role of the swashbuckler and maverick. Looking back, that’s exactly what she did in 2017. There just wasn’t the time – or the script – for anything other than Jacinda’s inspired, seat-of-the-pants, political acrobatics. The party had to let her carry more-or-less the whole campaign because it had nothing else to offer. When it did step back in – remember the sudden about face on the Capital Gains Tax, and the equally sudden reversal of the about-face? – it succeeded only in slowing Jacinda’s momentum and carving 3-4 percentage points off Labour’s final tally of Party Votes.

The best we can hope for is that Jacinda will be put in touch with someone with the same insouciant brilliance as Ben Guerin. Someone who simply doesn’t care if what he’s pushing out there is politically correct or incorrect – only that it works. Only if it causes the person scrolling-down his or her device to stop and read Labour’s latest post. That means engaging them at the level of the heart – not the head. To win “The Battle of the Thumbs”, as Guerin calls this struggle to hold the modern voter’s attention, you don’t have time to make them think – so you have to make them feel.

In the last, crucial days of the UK general Election, Topham Guerin Ltd’s brilliant parody of “Love Actually” was watched by more than 7 million British voters. It held them spellbound for the few minutes it took the equally brilliant Boris Johnson to give them his simple, but winning, messages. “The other guy could win.”, and “Get Brexit done”. Jacinda has the skills to do something similar – just ask Stephen Colbert! The $64,000 question, however, is: “Does she have anyone smart enough, and creative enough, to come up with an idea that good?”

Because, if all Jacinda has to take to the electorate in September 2020 is an automobile-driven infrastructure programme borrowed wholesale from the last National Government, then Simon Bridges is going to make sure that being the prime minister of a one-term Labour government is the only thing she has in common with Norman Kirk.

When Jacinda stood in the Auckland Town Hall in 2017 and proclaimed Climate Change “the nuclear-free moment of my generation” – how we all cheered.

The thing is, we were expecting her commitment to amount to something more than the well-meaning but toothless Zero Carbon Act. Something like announcing a completely new, wider-gauge, electrified, national rail network. An infrastructure programme that would allow New Zealand to replicate the ultra-fast trains that move people around Europe, China and Japan. Something to put the greenhouse-gas pumping road transport industry out to pasture. Something more than a plan to build roads, roads and more roads.

Something to make young and old alike exclaim, at least one more time: “Let’s do this!”