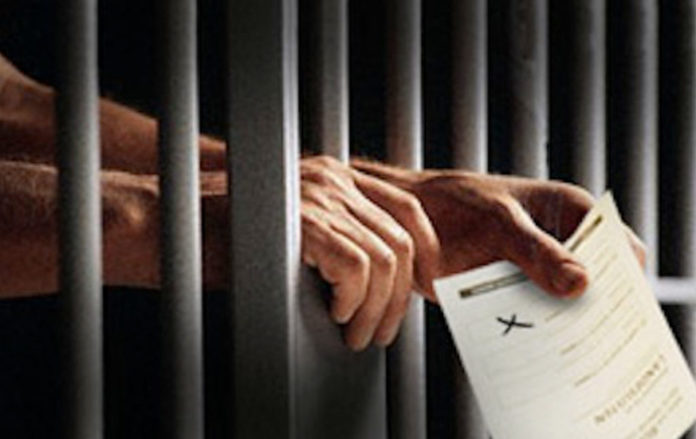 The government announced over the weekend that prisoners with sentences of less than three years would once again be given the right to vote, taken away from them a few years ago by National.

Pressure has come from a number of sources, including the United Nations, to reinstate this right. I was really interested in National’s response.

Simon Bridges said that he would remove the right again if National became the government.  It is not a matter of law, he said, but of values. So let’s look at these values a bit more closely.

Bridges said that people in prison were not good people and should not be able to vote. Problem one with this view is that it sets up a very shonky binary: all people who are in prison are bad and therefore should not be able to vote, and all people outside the prison are good and should be granted that right. Would he really claim this? I doubt it.

Problem two is that we are supposed to have universal suffrage.  Everyone should be able to vote, whether they make bad decisions or good.  It is the balance of the votes that leads to the outcomes that we get, not the privilege of one group over another.

Problem three is defining who should or should not get the vote.  Are ‘prisoners’ the only category we may want to exclude? How about ‘white supremacists’, for example, or men who watch child pornography. That’s the tricky thing about values – they are a slippery slope down which the principles of a universal suffrage can quickly disappear.

The granting of the right to vote is always contested in democracies and is always debated on the basis of ‘values’. How about this one: only men should have the ability to vote as only they have the intelligence and acumen to choose who should run the country. And women are too emotional, you know! That ‘value’ was comprehensively overturned in Aotearoa in 1893, and showed the world the way. Nowadays, we do not seriously argue that women should not vote, or be MPs, Mayors or Prime Ministers.

While National can be criticised for its essentially nonsensical position, the Labour coalition really are not much better.  What the government has done is applied exactly the same test as National but simply drawn the line higher. Those people sentenced to more than three years in prison are beyond the pale.  They should not be allowed to vote. Really? Why three years, and not two or four?

The truth is that most people are in prison because of lifetime abuse, including sexual abuse as a child, drug addictions, mental illness, paths of misfortune,  poverty (especially in the case of benefit fraudsters), misguided beliefs about male power in relationships that cause violence (and sometimes worse, as we have seen last week) and suchlike.  They are victims as well as perpetrators.

While our society might want these people to suffer a term of incarceration, blowing them off as unworthy to vote simply consolidates the pariah status of these very damaged people.  It really does not help at all. Universal suffrage in prisons, coupled with the opportunity for civics education about citizenship, democracy and voting, can itself be part of the solution.

As always, debates about the rights of prisoners get sucked into a most punitive view of the prison population.  In this case, these people, and only these people, are to be excluded from the democratic rights enjoyed by all the rest of us, no matter how undeserving we are.  It is really sad.

The trouble for the government, I think, is that there is a perception that they are good people without the moral courage to act fully on their beliefs in overcoming the terrible policies of the past thirty years.  If they had gone full monty on this: prisoners will be able to vote and will do so because democracy must be inclusive or die… well, would the sky really have fallen? Then they could have challenged Bridges up front on his ‘values’ argument, against principle. Now, we are stuck in a half-world where things are better than they were but there is still a very long way to go.