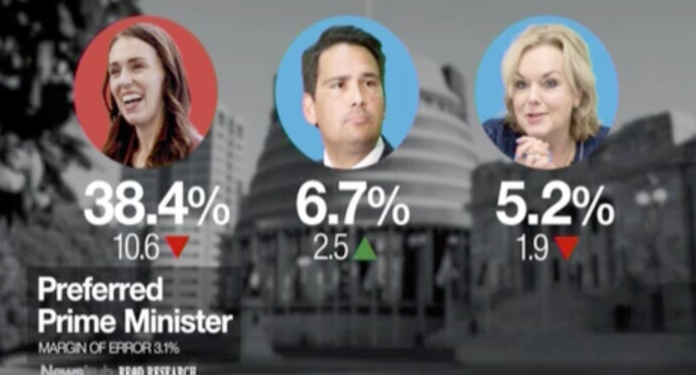 This puts the focus on the Greens, whose polling has held firm at 6.3 per cent. NZ First is sitting at 4 per cent, which would see it fall out of Parliament.

ACT is at 1.4 per cent, which would also see it out of Parliament if David Seymour failed to win Epsom.

This has changed from the last Newshub Reid Reserch Poll in June, which showed support for Simon Bridges and National plunge to dangerous levels.

That poll saw Labour’s support rocket up to 50.8 per cent, while National dropped to 37.4 per cent. The Greens were on 6.2 per cent, and NZ First were on 2.8, enough to see them fall out of Parliament.

No one should be shocked or surprised by this sudden drop in Labour support and Jacinda’s personal preferred PM numbers. This Poll was taken at the height of major media pundits and journalists falsely accusing Jacinda of knowing about and covering up a sexual assault as spelt out in grim detail by The Spinoff.

It is surprising that Labour and Jacinda didn’t stumble much further because of that character assassination.

You will note no one is claiming Jacinda covered up and hid a sexual assault now are they?

I mean, if you honestly believed the PM covered up and hid a sexual assault then your Journalistic integrity MUST be to keep demanding her resignation every day of the week, anything less is cowardice or hysterical headlines generated by a clickbait media feeding frenzy with all the eye rolling melodrama of a sadfishing mummy blogger.

This Poll is a knee-jerk from the Spinoff article, but it does throw up some interesting insights.

ACT are now 2 seats under MMP coat tailing and that is because of ACT’s focus on free speech which is picking off more ideological National young males.

NZ First have bounced back into contention for a 5+ result.

Greens only benefited by .1% off a 9.2% Labour drop which should terrify the Greens and who are doing nothing to yet prove they will be able to get over 5% on election day. This result is still lower than their actual 2017 election result.

Even at the height of accusing Jacinda of covering up a sexual assault, only 2.5% more liked Simon Bridges. When you can’t win any more favour off the person being accused of covering up a sex crime, you really do need to ask some serious questions.

I think the Spinoff accusation knee jerk will swing back but if ACT can keep pushing the Free Speech issue and gain more MPs off the coat tailing, National suddenly have a pathway back to power, especially if the Māori Party can win Te Tai Hauāuru.

This impacts NZ First who become just one kingmaker amongst several.