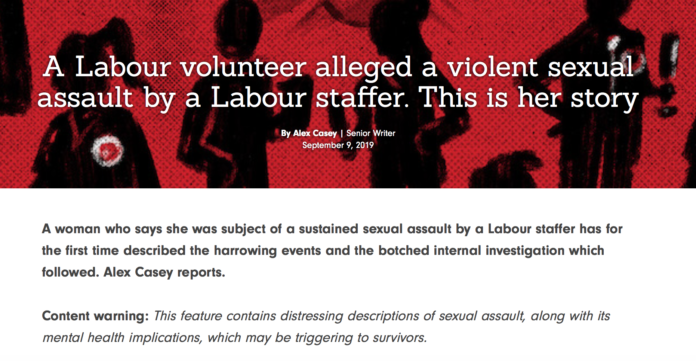 I have been incredibly dismissive of this Labour Party Sex Scandal.

I am deeply cynical towards Millennial micro-aggression policing culture and its language of catastrophe where any look, gesture or interaction that makes the subject ‘unsafe’ is elevated to a hate crime.

In a world where accusation is the new evidential threshold and due process is criticised as white cis-male privilege, I find myself deeply skeptical of those crying wolf. Time and time and time again we have an accusation made, investigated and found falling far short of objective standards of evidence.

This is how I had viewed the latest allegations made regarding a Labour Party Staffer who was accused of sexual assault after speaking privately with people aware of the issue.

I was wrong in expanding that cynicism to this case.

The extraordinary journalism on display today at The Spinoff by Alex Casey demolishes any facade that the allegations were a mistaken interaction that has been over hyped.

The seriousness of this sexual assault and its graphic description is not a mis-interpreted comment, or gesture, or fumbled pass – it is a violent act that can not be defended by a misunderstood consent…

“I remember I was looking at the screen and I felt him lean down over me onto my shoulder.” She initially ignored it and continued to ask questions about the documents they were looking at, keen to stay focussed on the work. Standing behind her, he placed one hand on her thigh, and the other under her shirt, she said. Feeling both his arms tightening around her body, she began to panic.

“I tried to knock him off but he put me in a hold across here,” she recounted, gesturing to her collarbone. He pulled her off the chair and onto the floor, keeping his arm and his body weight on top of her as she struggled, he said. “I remember him just saying, ‘shhh,’ and shushing me or telling me to be quiet without explicitly telling me, or he’d press his arm down on my windpipe.”

Desperate to attract the attention of the rest of the household, Sarah banged her feet against the hardwood floors, she said. She recounted him pulling down her jeans, and the coldness of the floorboards against her bare skin. He aggressively groped her breasts, she said, before pulling her underwear down and violently penetrating her with his fingers.

“I was just in total disbelief, struggling a lot and still trying to bang on the floor,” she said, taking long pauses in her recollection. She continued to hit her feet on the ground through the attack, hoping to make as much noise as possible. “I just wanted someone to come upstairs. Anyone.”

The assault lasted between 10 and 20 minutes, she said, before he rolled off her. “I was just lying there for ages and then tried to frantically put everything on. I grabbed my phone, I grabbed my USB [from] the computer. I was shaking, I couldn’t speak.” She told him that she had to go home. He asked her if she wanted to stay the night.

…the Labour Party hierarchy, who have been at pains to make private assurances that this has been some giant misunderstanding between two innocent individuals, can no longer be afforded that benefit of the doubt. What has been painfully examined by The Spinoff is none of those things, it is a clear criminal act that demands investigation.

I know who the Labour Party Staffer is, I am aware of their contacts. The Party’s response to date looks nothing short of protecting this individual rather than a desire to know the truth and have follow through consequences to that truth.

These allegations are far too serious for the Party to ignore again.

This case requires re-opening, there can be no acceptable outcome that doesn’t start there.

We all owe The Spinoff a debt of gratitude for their journalism of this dark matter.