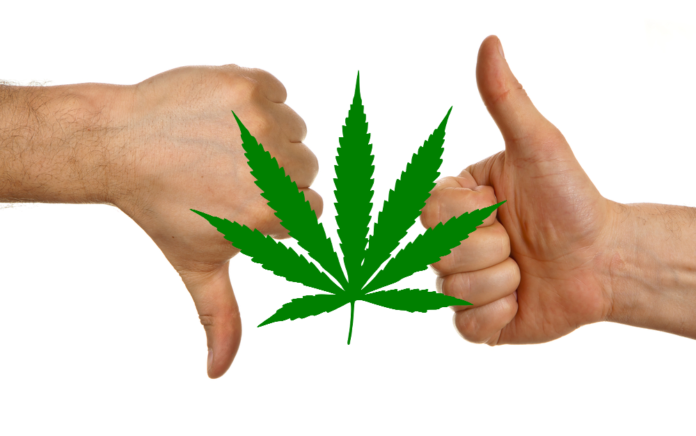 That itself was a contrast to other recent polls that showed majority support for legalisation, including in May 2019, when 52 per cent of those surveyed said in a Horizon poll that they would vote to legalise, while 37 per cent said they would vote ‘no’. Six months earlier, in October 2018, another Horizon poll was released which showed 60 per cent of people would support the legalisation of cannabis for private use.

So what does all this mean?

First, we can’t deny that support has dropped. This is a wake up call. The absence of detail around what we’ll be voting for, and why, has been filled by the likes of Family First and Mike Hosking. They are leading the debate, because the Government refuses to engage and law reformers have no resources.

Contrary to the hysteria and fear-mongering spread by the likes of McCroskie and Hosking, we have no Big Cannabis backing us. Most businesses can’t see a clear way for them to be involved in any marketplace that is yet to be discussed in detail. I think some are also (quite rightfully) wary of being seen to be involved and potentially reinforcing concerns about business taking over.

And while many advocates and activists favour non-commercial models that focus on home growing, we still find many supporters are wary of donating for fear of what turns up on their bank statement.

It seems there is little chance of law reformers being able to match the fortune Family First has stashed away, or the media reach of NZ’s number one radio jock.

To borrow a phrase from Winston Peters, the only cannabis poll that counts will be the referendum itself.

1. The referendum will pass, and

2. It won’t be the same question as this (or any other) poll.

The government will only put up something that will pass by a large majority. They won’t propose a question that fails. That’s why it hasn’t been decided or announced yet.

The Government will put forward a model that is broadly supported, and will pass comfortably. That is a certainty, if only because their future is tied to the result. Anyone who thinks the referendum will fail is asking the wrong question.

It’s not whether the referendum will pass, but what will pass.

At the moment that is perhaps more likely to be restricted to legalising personal use by adults but perhaps not allowing sale or supply, which would leave the lucrative cannabis illicit market in the hands of organised crime. Maybe adults would be allowed to grow a plant or two, or maybe not. Maybe old cannabis convictions would be wiped, or maybe not. Maybe hospices would continue to worry about letting palliative care patients consume on their premises, or maybe not.

We have until about March next year to move public support sufficiently so that the government is confident enough to put up a model that properly regulates cannabis sales to adults.

Anything less will continue to enrich and empower organised crime.

How we can do this

We need to keep our eyes focused on the end goal and just keep doing the hard work that gets us towards this goal, such as public events, speaking, writing letters, collecting petitions, meeting with local representatives, engaging with local Council and service clubs, calling talk back radio, holding exhibitions, and all the usual activity that successful campaigns do.

We must use messaging that convinces the over 50’s. They vote. They won reform ballots overseas. But they haven’t yet been won over here.

The best way to win this important demographic is to focus on crime, safety, and how it will improve their lives, including their family.

Family First are targeting these same people with crime- and safety-related messaging whipping up fears about gummie bears, driving, violence and neighbourhood crime. It’s working for them.

We need to reset the narrative. Start with reading this page for fact-checking the anti-cannabis reports cited by Bob McCroskie and Family First.

Crime and safety are usually a top issue every election, so relate cannabis law reform to this and we will immediately have more conservative people thinking about supporting the referendum.

Access to medicinal cannabis will also help bring over this older group.

It’s also obvious the general public are more concerned with rebuilding communities than building stock values for ganjapreneurs, and I think many people have found the jostling for medicinal cannabis market dominance to be distasteful. Let’s focus on how reforms can increase equity and fairness, and keeping their grandkids, nieces and nephews out of jail.

Our messaging for young people is different because we already have their support, but they often don’t vote. So our campaign is to get people registered to vote, ensure their friends are too, and getting them to actually do it on voting day.

Young people have the most to gain, but this referendum is a make-or-break opportunity that if we lose won’t come around again for another generation. Their future is at stake. Let’s not let them down.

We need to all work together and not at cross-purposes. Fit yourself into a plan, and do things that other people and groups agree are good ideas. Or financially support people who are doing good things, including NORML, #makeitlegal and the NZ Drug Foundation.

Be part of the solution, not just navel-gazing online or criticising from the sidelines.

We need money and your help

If you can help, we desperately need funds and volunteers for our campaign, and keen to hear your ideas.

This is an opportunity to refocus our campaign, not on whether the referendum will pass, but what will pass and how you can help make it happen.

Don’t panic. We can do this.

Chris Fowlie is the CEO of Zeacann Limited, a medicinal cannabis producer; co-founder of the New Zealand Medical Cannabis Council; president of the National Organisation for the Reform of Marijuana Laws NZ Inc; co-founder of The Hempstore Aotearoa; resident expert for Marijuana Media on 95bFM; blogger for The Daily Blog, and court-recognised independent expert witness for cannabis. The opinions expressed here are his own.