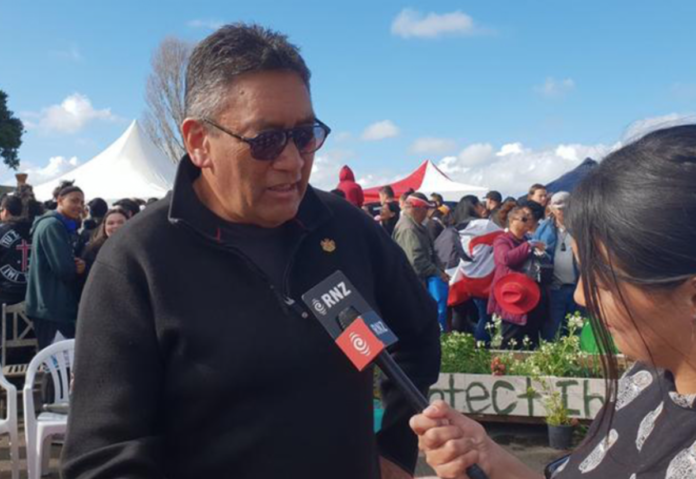 There’s been a lot of discussion about whether a conservative party will emerge before next year’s election to provide a coalition friend and balance of power to help National form a government.

What I’ve been looking for, is a party on the Left. One that will counteract the power of New Zealand First, and provide a counterweight to the others on the Right and ‘Centre-Left.’ The Green Party’s fortunes after the next election are uncertain if past minor party performance is any example. And they’ve become so centrist that there’s room for views on the Left.

But just when I despaired of the rate at which electoral success is matched with compromise and mediocrity in the Greens, just when I thought there was no Left, left. Just when we needed a leader with fire in the belly, to pull New Zealand back to the Left, Hone Harawira turned up at Ihumātao and gave me hope.

Even though he arrived at Ihumātao with members of the Destiny Church which was odd to me, he’s representing an important Maori constituency in doing so. “I know from being in prison myself,…Man Up works’ he says. Unlike others involved with the Ihumātao dispute, he said that the Prime Minister is right to stay away and leave finding a resolution to her Ministers. Hone was confident, strident, and he had strong opinions, and he had mana. It was refreshing to think the Mana Movement might be back as a political force for good.

Indeed, in Ihumātao the mana of the people is rising, being given voice around a unifying cause – that resonates the issues of land confiscations and indigenous powerlessness around the globe. Some people have been scathing of the popular support the Ihumātao protectors have received. There have been accusations of bandwagoning. I prefer the explanation that it’s our zeitgeist. We’re frustrated with past injustices perpetuated today. We’re sick of the privilege of corporates. We’re angry at the ruination of shared heritage, of desecration for money. We’re sick of political complacency, of the conservatism of power.

Now, Ihumātao is being described as a revolution, this era’s Springbok Tour, our Bastion Point, the biggest Māori movement of our time. The beautiful moments of peace like when the police plant trees with children and sing along with the crowd show class and ethnicity more unites us than divides us, and that cops with guitars can do more to shape peaceful reconciliation than when they’re carrying batons.

The surprising flashpoint that is Ihumātao was a perfect moment for Hone to make his re-entry, bringing with him authenticity, straight talking, staunch. Back on the scene speaking to the dispossessed, disenfranchised, disappointed. I hope we can hear more of him as we get nearer to the election.