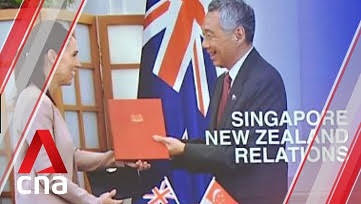 JACINDA BEAT US into Singapore by a day. She was news. As we checked into our apartment complex, the TV monitor in the lobby showed her standing there beside the Singaporean Prime Minister. The sound was down, but her trade-mark smile and endearing earnestness possessed their own special eloquence. Of course, we gushed. “That’s our Prime Minister! That’s Jacinda!” I’m pretty sure that any New Zealander, finding themselves in similar circumstances, would have done the same.

And that was just Singapore. Days before standing alongside Lee Hsien Loong, she had stood alongside the French president, Emanuel Macron, in the Élysée Palace, urging the assembled social media titans to bend their stiff knees to common human decency. Which, most of the world’s commentators agreed, wasn’t too shabby a performance for a girl from Morrinsville, New Zealand. What was it about the last stop on the global bus route that encouraged its leaders to aim so high – and get there?

It’s New Zealand’s extraordinary ability to do good in the world that has long inspired me to keep faith with its core institutions; its democratic traditions. If our Prime Minister has done nothing else with the high office she holds, she has demonstrated New Zealand’s potential as a trail-blazer and a moral marker. In a world where political malevolence is more in evidence than at any time since the 1930s, Jacinda Ardern’s “politics of kindness”; her unaffected displays of simple human empathy; have given new hope to millions who despaired of the public sphere ever again being so powerfully reclaimed for goodness.

There is so much more that could be done. So many good examples to set before the world. But we must not chide Jacinda for failing to fully realise her country’s potential. She is, after all, a young woman enmeshed in the myriad constraints of practical politics. There are colleagues and coalition partners to coddle and placate; powerful interests to acknowledge and assist. Our Prime Minister can only do what it lies within her power to do. To ask for more is churlish and naïve.

But New Zealanders, themselves, should draw a lesson from the way in which Jacinda’s gestures have been received by the wider world. Its reaction has not been to withdraw into cynicism; to look for the catch; to recoil in embarrassment in the presence of such naked emotion. Quite the reverse, in fact. The world cannot get enough of love. It rejoices in its open display. It reassures them that Anne Frank’s impossibly generous affirmation: “I still believe that people are basically good at heart”; is more than a forlorn declaration of hope – but a statement of fact.

In the context of all manner of right-wing “Christians” flying all manner of kites about the formation of all manner of Christian political parties, it is instructive to compare and contrast the behaviour of Alfred Ngaro and Hannah Tamaki with that of the Prime Minister. What have they said and/or done to unlock the doors to love and compassion? What words have they spoken that opened people’s hearts and minds to the possibilities of forgiveness and reconciliation?

My favourite Bible story is the one about the woman taken in adultery. The terrifying picture of the villagers gathering around her: a jagged rock in every hand; their eyes alight with the lust to punish and to kill. In the midst of this murderous maelstrom sits Jesus. Silent. Self-possessed. Doodling idly in the sand with a stick. The woman cowers in terror. A man steps forward, arm uplifted. Jesus rises to his feet. He meets the eye of every person in the crowd.

“Let he who is without sin cast the first stone.”

He lifts her to her feet. She meets his gaze. He smiles.

If we were allocating roles for Mr Ngaro and Ms Tamaki in this holy drama, where would we place them? With Jesus? Or, with those so eager to cast their jagged stones?

The Christian Right seeks only to put rocks in voters’ hands. It bids them use their ballots as weapons – to punish the sinful.

When they speak, are our hearts lightened? Do they encourage us to weep in solidarity with those who suffer? Do their words of harsh judgement produce the same thrill of pride that coursed through New Zealanders when they heard their Prime Minister deliver to Facebook and Google a message equivalent to “Go now – and sin no more.”

It was just before the crucial general election of 1938 that New Zealand’s Labour prime minister, Michael Joseph Savage, responded to the accusation that his Social Security Bill was “applied lunacy”, by declaring that, to his way of thinking, it was “applied Christianity”. In the same vein, New Zealand’s greatest (and all-too-human) poet, James K. Baxter, wrote about “the rough mystery of love/In the running straits of History”.

These are the thoughts that encouraged me upon my return to New Zealand.

When we are overseas it is very easy to think that the world is much too big, and we are much too small. But, coming home, the thought strikes us, like a shaft of sunlight from a darkening sky, that although it may be small in size, and population, New Zealand – and New Zealanders – have always been big enough to show the world that hope is not always in vain; and that, sometimes, love can win.