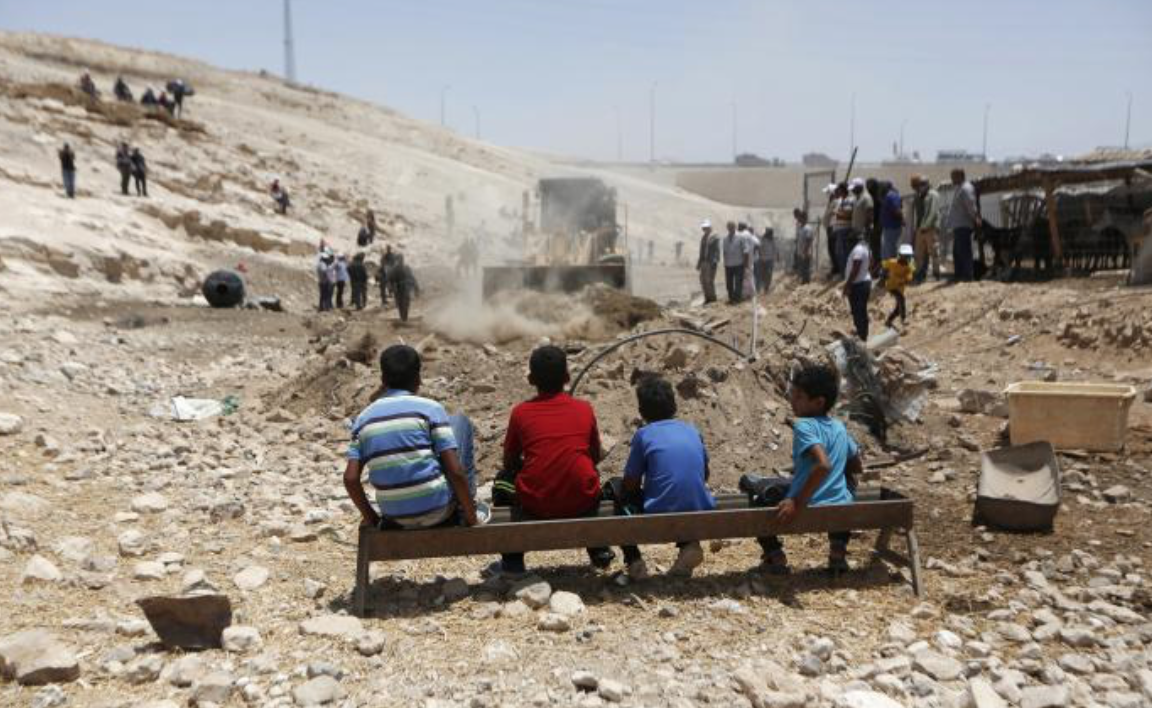 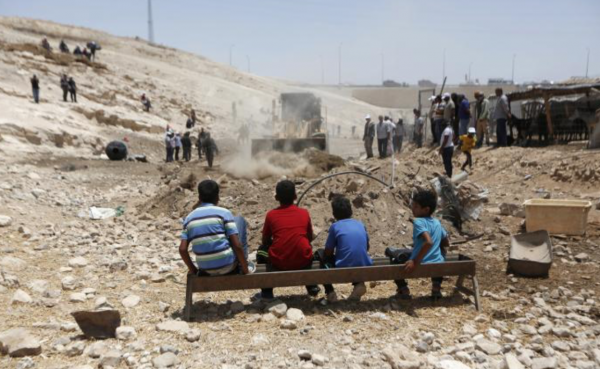 Condemnation of Israel’s most recent act of destruction in the Palestinian village of Khan al-Ahmar was expressed on 4 July this year by the European Union and the United Nations. Since the 1950s the Jahalin Bedouin community’s homes, schools and livelihoods have been under constant threat by the Israel. As one villager, Tahreer Abu Dahouk, a mother of four children all aged under ten years, put it: “we sleep afraid, wake afraid”.

History
The Jahalin Bedouin lived originally in Tel Arad in the Negev, from where they were driven by the Israeli military in the 1950s. Denied Israeli citizenship, they were forced into the West Bank to make way for new Jewish immigrants. In 1967, the Jahalin found themselves, together with their livestock, yet again being ethnically cleansed by Israeli Occupation soldiers, this time for the benefit of Israel’s Jewish-only Kfar Adumim illegal Occupation settlement. In May this year, the Israeli High Court of Justice, ruled that the Israeli state may expel the villagers from their homes in Palestine. In total ideological denial of international law, Israel claims that it is the Jahalin community’s presence in Khan al-Ahmar that is ‘illegal’.

Violations of international law
The United Nations, the European Union and a number of EU member states have demanded that Israel halt its destruction of Khan al-Ahmar. The EU noted on 4 July that Israel’s settlement policy, forced transfers, evictions, demolitions and seizure of homes are illegal under international law. Accordingly, the EU has informed Israel that it “expects the Israeli authorities to reverse these decisions and fully meet its obligations as an occupying power under International Humanitarian Law.” In a statement, a spokeswoman for the UN High Commissioner for Human Rights called on Israel to abandon the demolition plans and said the destruction of private property by an Occupying power violated international law.

Israel has long sought to clear out the native Bedouin from the area between the two illegal Israeli Occupation settlements of Ma’ale Adumim and Kfar Adumim. Living under belligerent, foreign military Occupation, Khan al-Ahmar villagers lack health, education and welfare services, and are denied even the most basic facilities such as electricity, sewerage and sealed roads. Bedouin villagers are also subject to severe restrictions regarding access to pasture for their livestock. In stark contrast, the Israeli Occupation settlements enjoy abundant supplies of water and electricity, and total freedom of movement on excellent roads.

The recent scenes of Israeli brutality and abuse are shameful. Panic-stricken Palestinian children, screaming as they watch the evictions, see their parents abused by Israeli police and soldiers. Mothers are violently pushed to the ground, dragged along and their faces pushed into the sand. According to United Nations observers, almost straight away, 35 Palestinians were injured as the Israeli assault on the village got underway. While these barbarities shame Israel, they also bring shame upon the world community that does nothing to restrain them. With Israel’s Prime Minister, Benjamin Netanyahu, enjoying the unconditional support of the Trump Administration and, in addition, the appointment of David Friedman (a dedicated pro-Zionist lawyer) as US ambassador, Israel believes that it can continue to ignore the warnings of human rights organisations and hundreds of public figures representing the world community.

Earlier, on 11 June, a petition signed by more than three hundred international figures — former prime ministers, Nobel laureates, intellectuals, artists and writers, as well as faith leaders and global civil society — condemned the forced displacement of Palestinian people. But Israel went ahead and did as it pleased because the destruction of Khan al-Ahmar serves a broader Zionist annexation strategy. The annihilation of the site would be another step in the encircling of Jerusalem and its isolation from the rest of the West Bank. Further, planned Israeli settlement threatens to split the Palestinian West Bank in two, from north to south.

Temporary stay of execution
The Israeli High Court has since ordered a temporary delay to the destruction of the village and the removal of the villagers planned for 12 July. The Israeli Occupation has closed the area around Khan al-Ahmar to the general public until the end of the month as it begins to build a road to the village. The road will ensure a swifter process of eviction, which the Zionist state hopes will lessen the opportunity for unfavourable publicity. Construction of the road could take several days or weeks. Meanwhile, in scenes reminiscent of the Domesday Book, Israeli colonial officers and police took measurements in Khan al-Ahmar and recorded the numbers of livestock present.

Taking responsibility
Until Israel is called to account, the foundations of international law and the stability of rational, rules-based agreements will remain imperilled. At present, while Israel profits from marketing population-control weaponry, and US taxpayers subsidise the state’s foreign military Occupations, the Zionist regime continues to enjoy favourable trading terms and treaties with UN member states. It should be plain to see by now that, until it faces the sanctions that respect for international law require, Israel’s violations and undermining of human rights will be unstoppable. Without moves to guarantee the security of the Palestinian people, countless United Nations Resolutions will remain nothing but empty rhetoric. Do we want a future that will see justice, human rights and international law fade into oblivion?

New Zealand
The temporary delay in ethnically cleansing the village of Khan al-Ahmar affords a priceless opportunity for us to act in defence of this vulnerable community and all other victims of Israel’s expansionist ambition. When will New Zealand join the world community and raise its voice against Israel’s inhumanities and violations of international law? A British Labour Member of Parliament, Wes Streeting, has asked his fellow law-makers, “Is it not time for this country and our European partners to take targeted economic sanctions against illegal Israeli settlements in the West Bank?” Will any New Zealand MPs now speak out in our Parliament and demand justice for the Palestinian people? Is it not time for the Government of New Zealand to live up to its oft-proclaimed values and demand as much itself? Silence amounts to complicity.