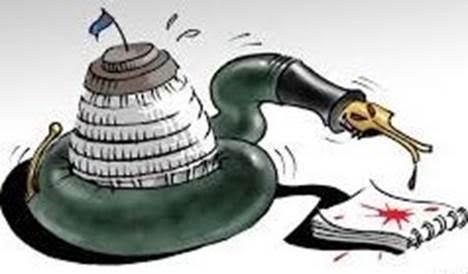 WERE YOU AWARE of the Easter “pile-on”? The media assault on Jacinda Ardern’s credibility when, according to Herald journalist, Fran O’Sullivan: “the commentariat … basically rose as one and questioned her prime ministerial abilities”.

Nothing remarkable in that, you might object, in a liberal democracy it is entirely right and proper for the news media to judge the performance of presidents and prime ministers. Yes, but shouldn’t such judgements be based on a sober and objective assessment of the leader’s actual performance? Isn’t that one of the critical (if unspoken) assumptions underpinning the whole notion of media freedom?

Can liberal democracy survive if the news media abandons evidence-based judgement and simply piles-on “as one” against a prime minister and her government? And what if it isn’t just the timing that’s consistent, but the message as well? What then? How is the public to avoid the impression that the news media is rooting for one side and not the other?

This is more than idle speculation. We have only to look at the United States to see what happens when a significant number of voters simply stop believing anything reported by media organisations which have not already identified themselves as co-partisans in the political struggle. Any negative story emerging from the other side’s “lying media” can be branded “fake news” and dismissed as further proof of the its uncompromising mendacity.

When President Trump tweets his outrage at “the lying New York Times”, liberal New Yorkers may puff out their chests with pride. The eyes of mid-western conservatives, however, will narrow with suspicion and their hatred of the “coastal elites” intensify.

In a political environment as polarised as this, the openness and tolerance which liberal democracy needs to function – withers and dies. It is impossible to engage in any kind of fruitful political discourse when every participant believes every other participant is lying.

The media picture in New Zealand is further complicated by the absence of newspapers and radio stations which loudly and proudly advertise their partisan allegiances. Kiwis do not have the option of subscribing to the equivalent of the UK’s Guardian or Daily Telegraph. There is no MSNBC for liberals to watch; no Fox News for Kiwi conservatives.

That being the case, the New Zealand news media has always strived to balance right-wing opinion with the perspectives of left-leaning commentators. This is not just a question of fairness, it is a vital to the maintenance of trust. Readers, listeners and viewers need to feel that somewhere in the mix of voices there is someone who speaks their language.

Even more important than ensuring a diversity of opinion, however, is the news media’s responsibility to separate fact from fiction and apply a critical eye to the news it reports.

With all these factors in mind, let us turn again to Ms O’Sullivan’s “Easter pile-on”.

The two news stories which generated so much common outrage in the “commentariat” were Jacinda Ardern’s and Winston Peters’ response to the poisoning of Sergei Skripal and his daughter Yulia in the UK city of Salisbury; and the Prime Minister’s handling of Broadcasting Minister Clare Curran’s coffee-date with RNZ’s head of news and content, Carol Hirschfeld.

In the Skripal case, the reportage and commentary (often filed by the same journalists and in the same story!) appeared to have been scripted by the UK Government. The only course of action which the commentariat was prepared to recognise as prime-ministerial is the one where Jacinda Ardern follows along behind the Russophobic UK Prime Minister, Teresa May, like a dutiful “Five Eyes” poodle.

The very notion that the NZ Government might withhold its judgement until it possessed hard evidence of the perpetrators’ culpability was laughed out of court. Laughter, indeed, featured heavily in just about all of these commentaries – as in “New Zealand has become an international laughing-stock”. As if an independently-minded New Zealand prime minister was simply too risible a notion to be taken seriously.

How quickly New Zealand’s political commentators have forgotten David Lange and the fourth Labour Government’s nuclear-free legislation. And how loath they are to recall the UK’s refusal to condemn the French perpetrators of state terrorism on NZ soil. That so many Kiwi journalists were willing to be guided by the same people who gave the world the “sexed-up dossier” on Saddam’s WMDs; the same country responsible for illegally invading Iraq; spoke very poorly of their ability to evaluate critically the news they were reporting.

The state of NZ journalism was the unspoken theme running through the breathless reportage and commentary of the Curran-Hirshfeld coffee-klatch. Or, perhaps, it is more accurate to call it the State and NZ journalism. Because, at the heart of so many of the piler-ons’ commentaries lies a deep and abiding disinclination to view public service journalism through anything other than an aggressively anti-state lens.

That Ms Curran may have enlisted the support of Ms Hirshfeld in her quest to reinvigorate public broadcasting was presented in the most sinister terms. That the RNZ Board may have been engaged in resisting the Government’s broadcasting policy was not presented as being in the least bit sinister – quite the reverse.

Prime Minister Ardern was castigated for not reining-in a minister who was clearly determined to extend the reach of “Red Radio”. As an accusation it played beautifully into the commentariat’s subtextual insinuation that this government isn’t just unacceptably socialist, but that its policies are being delivered with a Stalinist inflection. Why else would the PM refuse to condemn the actions of the obviously guilty Russian state and its ex-KGB president?

A commentariat prepared to rise “as one” in its delivery of these rebukes risks alienating all but the most unreconstructed cold warriors and knee-jerk National supporters. Those less disposed to follow the lead of our “Five Eyes Partners” in the Skripal case, along with those who regard the reinvigoration of public service journalism as a very good idea, will feel both affronted and aggrieved by the “Easter pile-in”.

Genuine media freedom, embodied in a diversity of political voices, can only strengthen the public’s trust in journalism. That’s because the truth is always a composite picture – never a single frame.

When the commentariat “piles-in” with a single voice, it is not to our left-wing government that we should look for evidence of Stalinism.