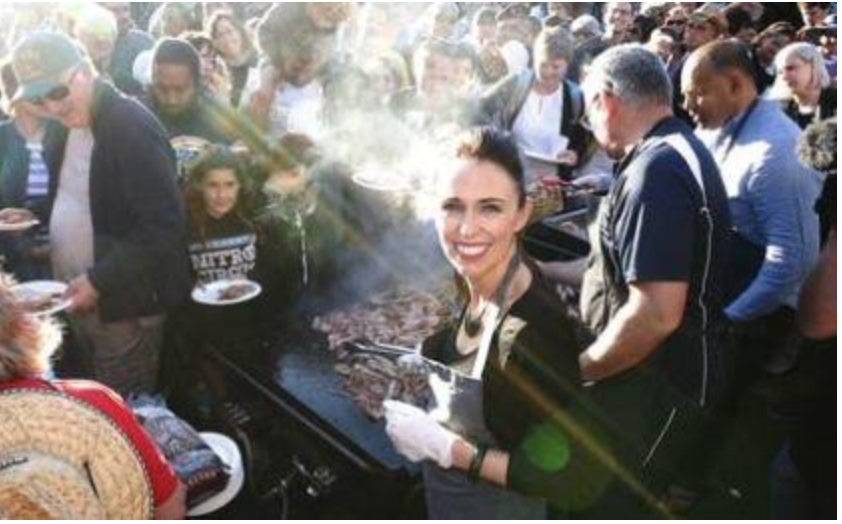 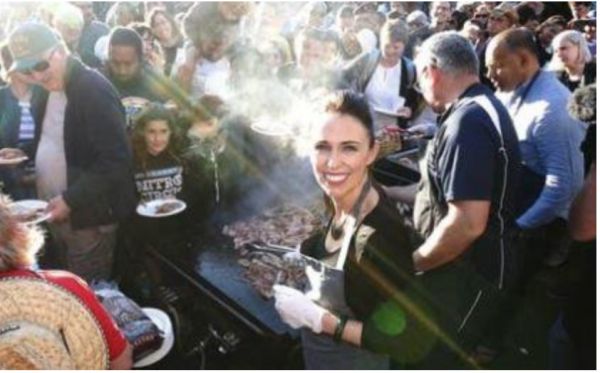 “SMOKE GETS IN YOUR EYES”, wrote Jerome Kern’s lyricist, Otto Harbach, in 1933. The tears well-up even faster, however, when your eyes are full of stardust. This latter affliction appears to have struck just about every journalist assigned to cover the Waitangi Day celebrations of 2018. Simon Wilson’s eyesight, in particular, seemed to be quite seriously impaired. How else to explain his confusing the arrival of Prime Minister Ardern with the Second Coming of Christ?

Which is not to say that the PM didn’t put on a very good show. The image of Jacinda quite literally serving the people (with bacon butties!) will do nothing to diminish her lustre in the eyes of most New Zealanders. When it comes to contriving the perfect photo-op, New Zealand’s youthful PM is a true professional. Her speechifying skills are also up there with the best. Whoever wrote her address from the porch of the whare runanga certainly knew what they were about.

All-in-all, as she settles back into the Beehive routine, the Prime Minister has every reason to adjudge her 5-6 days in the Far North an unqualified success.

The early images of any prime-ministerial term make a huge difference to the way he or she is perceived in the longer run. Think of John Key swigging beer from the bottle as Prince William barbecues their steaks. Or, going back even further in time, recall the image of “Big Norm” leading a little Maori boy across the Treaty Ground in 1973. Priceless shots. And now, the image of Jacinda, radiant among the bacon and sausages, must be added to this memorable slide show. Smoke gets in your eyes, indeed!

But, no matter how bulging Jacinda’s good-will account may have grown after Waitangi, the day-to-day exercise of raw political power will soon empty it out. On a multitude of fronts: international trade, health, housing, and poverty-reduction; her government’s mediocre performance (read John Minto’s excellent summary, here,)  presents a stark contrast to its soaring and benevolent rhetoric.

Even the Labour-NZF-Green government’s grand gestures appear puny when placed alongside the grand gestures of its progressive predecessors. Compare Jacinda’s Waitangi Day barbecue with the gesture I describe in No Left Turn:

“Shortly after his election as Labour Party leader in 1961, Arnold Nordmeyer was asked by the New Zealand Broadcasting Corporation to recall for its listeners ‘My Most Memorable Christmas’. He spoke movingly of the first Labour Government’s decision, in December 1935, to advance the equivalent of an extra week’s relief payment to all the unemployed as a ‘Christmas Bonus’. That single act of state generosity, he said, sent ripples of hope and goodwill through thousands of destitute families and hundreds of cash-strapped communities. By Christmas its effects were evident across the whole of New Zealand.”

The newly-elected Labour Prime Minister, Norman Kirk, did something very similar in December 1972.

Not such an arresting image as Jacinda serving-up bacon butties to the Waitangi crowd, but I’ll wager Savage’s and Kirk’s gestures filled more bellies!

Perhaps, I’m being too harsh on the Prime Minister. Perhaps, in 2018, the public’s willingness to countenance giving away a whole week’s-worth of social assistance to every beneficiary in the country just isn’t there anymore. Perhaps, after 30 years of neoliberal brutality, we are no longer the caring and generous people we used to be.

Bluntly, my problem with Jacinda’s stardust is that, while it’s in the air, it’s difficult to focus on anything else. Amidst all the glitter it’s easy to lose sight of the fact that, apart from a handful of long-overdue inquiries, and a return to the status quo ante in employment law (read all about it on Richard Harman’s Politik website, here ) very little of any real substance has been done.

Unless, of course, you consider signing-up to the “Comprehensive and Progressive” TPP a singularly worthwhile achievement. Personally, after reading Professor Jane Kelsey’s analysis of the CPTPP, I can’t help feeling that the whole tawdry exercise should be understood in the spirit of The Who’s incomparable line: “Meet the new boss, same as the old boss.”

And, please, all you Labour apologists out there, don’t tell me that all this inaction is about the fiscal cupboard being bare.

How much would it have cost the Minister for Social Welfare, Carmel Sepuloni, to stand up in front of an appropriate audience (the PSA springs to mind) and deliver a speech in which she set forth the new government’s expectations of all those employed by the Ministry of Social Development? What, precisely, would have been the price of her instructing the people at Work and Income to treat their clients with a modicum of compassion and respect? Surely, a public reaffirmation of every citizen’s right to public assistance in times of hardship and affliction would not have bankrupted the Treasury?

Likewise, with the Minister of Labour, Ian Lees Galloway. Could he not loudly and publicly have proclaimed the government’s rock-solid commitment to protecting and expanding the right of every citizen to fair treatment in the workplace? Could he not have urged every New Zealander in a position to do so to join a trade union? And could not Jacinda, in the course of her negotiations with NZ First, have told Winston Peters that while she was prepared to compromise on many issues, on the question of workers’ rights – specifically the 90-day fire-at-will legislation – Labour was not for turning?

In her speech from the porch of the whare runanga, Jacinda urged Maori to hold the Labour-NZF-Green government to account if it failed to deliver on its promises of uplift and renewal. They were fine words. But, then, Jacinda has a thing for words. She is always promising to engage in “discussions” and “conversations” about the problems confronting so many New Zealanders. Ideally, however, political discussion and conversation is what happens after political action has been taken.

The “other half” of New Zealand is crying out to this government for brave deeds – not fine words. The last thing Jacinda needs to be remembered for is substituting stardust for substantive action.

For blowing smoke into our eyes.