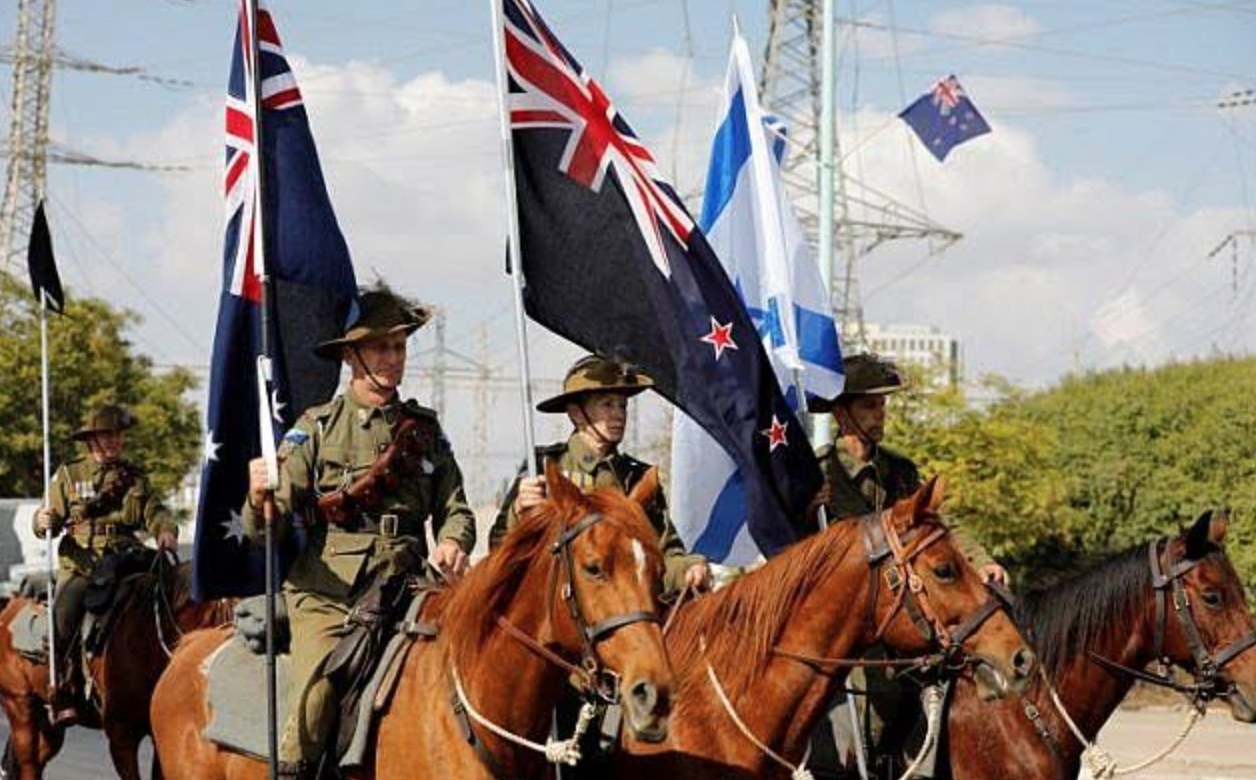 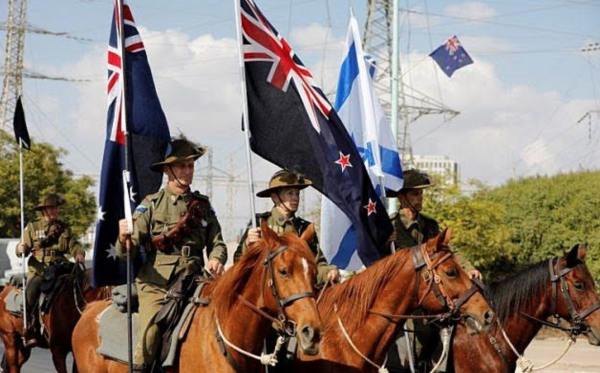 How dramatic, how exciting! A carefully researched , authentic re-enactment by the Australian and New Zealand descendents of the Light Horse Brigade whose brave cavalry charge lead to the defeat of the Ottomans at the Battle of Beersheva fought on 31 October 1917. Note the horses, the uniforms, the flags!

Well, actually, if you must be a hairsplitting killjoy, true, there was no Israeli flag in 1917, in fact no Israel in 1917. But that’s a minor detail.

The important point , as Israeli PM Netanyahu enlightened his visitors Australian PM Turnbull and the NZ Governor General is that the Battle for Beersheva was a victory for Israel. That’s what WWI was really about!

“Exactly 100 years ago brave ANZAC soldiers liberated Beersheba for the sons and daughters of Abraham and opened the gateway for the Jewish people to reenter the stage of history,” Netanyahu said.

New Zealand was represented by Governor General Dame Patsy Reddy at official commemorations in Israel, to mark the centennial of the Battle of Beersheba. Speaking on our behalf, she explained that Israel and NZ, “geographically distant but very much spiritually, emotionally, and intellectually we have a lot in common.”

So this is official NZ policy, even under our new government! “Spiritually and emotionally a lot in common!”

The clear message from NZ to Israel then is, we shall ignore: reports from Save the Children that  one million children are suffering from “unlivable” conditions in the Gaza Strip and reports from the   Israeli human rights group  B’Tselem of  broad, systemic human rights abuses against hundreds of Palestinian teens arrested every year in East Jerusalem. NZ certainly will take no notice of calls from Professor Michael Lynk,  U.N. Special Rapporteur on the Human Rights Situation in the Occupied Palestinian Territories,  for sanctions on Israel because of its illegal occupation.

Some spoilsports are complaining about Israel’s selling weapons to Myanmar. We say so what, even better we’ll just pretend we don’t know.

And the more we don’t know the better.

Dame Patsy on our behalf proudly accepted praise for New Zealand  from  Israeli President Rivlin, “ One hundred years ago, New Zealand’s soldiers helped free the Land of Israel from the Ottoman Empire in the First World War.”

Nevermind that there was no land of Israel in 1917. Nevermind that Britain promised Arabs that if they rose up against the Ottomans, then they would have autonomy.  You can throw all that into Orwell’s ‘memory hole.’

Dame Patsy replied to Rivlin saying that “NZ has been beside Israel from the beginning and will continue to be so.” (Operation Cast Lead ?,  Operation Defensive Shield? )

The Governor General then has made NZ’s position on Israel and the Palestinian people quite clear, to the Israelis at least. The Palestinians have no rights, deserve no voice.Whatever Israel does, is with NZ’s approval.

How many Kiwis are even aware of what the Governor General said in Beersheva, or even that she went? I heard about this from a contact with an Australian specialist in international law, Coordinator of  Justice for Palestine Matters.

Why is discussion of our relationship with Israel taboo? Why is there no debate about the treatment of the Palestinian people?

Does NZ have a Jeremy Corbyn?

Is there no media outlet that dares to question Israel’s hasbara (propaganda) interpretation  of the Battle of Beersheva ?

Lois Griffiths is a human rights activist and a Palestinian rights blogger.