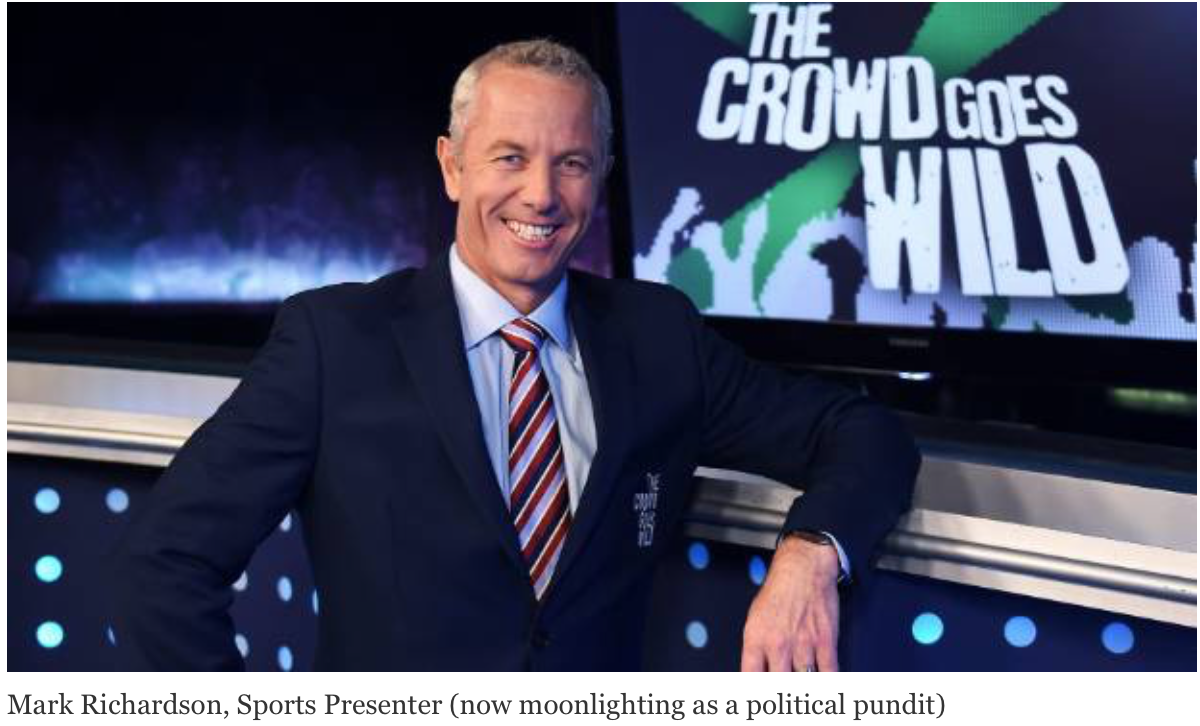 There is mischief-making afoot.

Suggestions for a National-Green coalition are being floated by various right-wing commentators, National Party figures, and some media pundits. Despite Green Party Leader, James Shaw, repeatedly ruling out any such possibility – the suggestion continues to circulate.

On  election night, as TOP leader Gareth Morgan realised his party would not reach the 5% MMP threshold, he made the bizarre comment that the Greens should join with National in a formal coalition;

“I want them [the Green Party] to do what we would’ve done if we had been above five, and say to National who are gonna be the Government it’s very obvious, we will work with you, we need to work on the environment no matter who the Government is.”

To which Shaw predictably responded;

“My view is that he would have been better off backing a party that had similar ideas, like us.”

This was reiterated for the NZ Herald;

Shaw said he would not being making contact with National, but he would take a call from National leader Bill English.

“It’s my responsibility to do so. And we’ll have to see what they’ve got to say. But one of the things I will be saying in return is ‘You know we campaigned on a change of government and you know what was in our manifesto … and how incongruous that is to what the National Party policy programme is’.”

“And then there’s the other one, of course, there’s the National-Green option, which is  favoured by National party members… it’s an interesting one…”

“…The Greens might be quietly reflecting on whether they, unique in the world as a Green party, should only link themselves to left-wing politics. Whereas  the environment is neither left wing or right wing, frankly. The environment is the environment, it’s Mother Earth we’re talking about.

And I just wonder whether or not they won’t reflect on towards the National government that signed up to the Paris Climate Accords and have set in place the process to reach  the goals that was set out there.

So I’d imagine in a quiet back room the Greens might be saying, ‘Why? Why are we saying we can only go with one party?’, eg the Labour party, and you might watch this space if I was you, John.”

Bolger’s hippy-like ‘Mother Earth’ musings was followed by Tracy Watkins. Writing for Fairfax media on 25/26 September, she still laboured under the impression that a National-Green coalition was a real ‘thing’;

Like Winston Peters, the Greens could theoretically hold the balance of power, after National made it clear it is more than willing to talk turkey with the minor party.

[…]  Some senior Nats consider a deal with the Greens more desirable than a NZ First deal – the Green’s environmental platform is seen within National as something it could accommodate, particularly after the clobbering it took over clean water during the election campaign.

That highlighted to National that its credibility on environmental issues and New Zealand’s 100 per cent pure brand needs some serious work – and a Greens deal would be a simple way to enhance its environmental credentials.

Peter Dunne followed on Radio NZ’s Morning Report on 27 September, with his call for a National-Green coalition;

“The best option in my view … is for the Greens to be very bold, work out that they could make significant changes on climate change policy, and go with National.”

Note that this suggestion came from Peter Dunne, who recently chucked in his own political career rather than facing  Labour’s Greg O’Connor at the ballot box.

Where was Dunne’s own boldness?

What happened to his own United Future Party?

Even a chat-show’s sports commentator put his two cents worth in. The AM Show’s Mark Richardson suddenly decided that commentating on grown men kicking balls around wet paddocks wasn’t enough of a challenge for him. Duncan Garner decided to prompt Richardson to offer the public his  suddenly new-found “political expertise”.

AM Show sports commentator Mark Richardson is dipping his toe into the political pool again, this time splashing his ideas at the leader of the Green Party.

Introduced by his colleague Duncan Garner as a “political expert”, who has “decided that you [Green Party leader James Shaw] should listen to him and this is what he wants to say.”

The cricketer-turned-broadcaster challenged Shaw to form a coalition government with National, following the stalemate reached in Saturday’s election.

I just want to say James,” said Richardson, directly to camera, “be a risk taker and back yourself, but not only back yourself, back that band of hopeful young administrators you take with them (sic),” he said.

How ‘delightful’ that National supporters and other sundry right-wingers are encouraging the Greens to be “bold”  and “risk takers”. After all, if such an unlikely coalition were to eventuate, the damage wreaked upon the Green Party wouldn’t impact one iota on the likes of Morgan, Hooton, Bolger, Dunne, Richardson, et al. But it sure as hell would destroy the Greens and eliminate the Labour Party’s only reliable potential coalition partner.

Game over for the Left.

So no surprise that a whole bunch of people on the Right and media have suddenly focused on the Green Party;

Success for that  programme was claimed solely by the Nats;

But as the fate of small parties such as ACT, United Future/Peter Dunne, and the Maori Party demonstrated with crystal clarity, snuggling up close to the National Party goliath is akin to trying to cuddle up to a ravenous lion. It will not end well.

So National would benefit two-fold.

By contrast, it is unclear what gain (if any) the Greens could hope to achieve.

Just to be absolutely clear – because evidently, having it in writing, in black and white, on the Green Party website – is insufficient for some people;

“Admittedly partly as a result of the decline of the Conservative Party, National has won more votes, got a higher proportion of the vote than it did in 2014 and 2008…”

It is unclear what Hooton has based that assumption on, as his statement is contradicted by the Provisional Results from the Electoral Commission.

According to the Commission’s website, the National Party gained the followed percentage and individual votes for 2008, 2014, and 2017;

Even the demise of Colin Craig’s Conservative Party (aka, CCCP) failed to lift National’s poll results.

Whichever way you look at it, the tide is beginning to ebb on National’s fortunes.

Following the 2014 General Election, I pointed out that Stuart Nash’s win in the Napier seat was due more to Garth McVicar splitting the right-wing vote, allowing Labour to slip through to victory. As I reported on 26 September, 2014;

Nash did not “win” Napier.

The National candidate, Wayne Walford lost the electorate when Garth McVicar from the Conservative Party split the right wing vote in the electorate. Remember; electorate contests are still fought using First Past the Post – not by any  proportionality or preferential voting.

The actual results were;

Add McVicar’s 7,135 to Walford’s figures, and the combined 17,443 would have trounced Nash easily.

On Election Night 2017, Stuart Nash did not had the benefit of a popular Conservative Party candidate splitting the right-wing vote. Instead, he won the seat outright;

Not only did Nash retain his overall majority, but McVicar’s 7,135 votes from 2014 appears to have been evenly split between Nash and Elliott.

This time, Nash can legitimately assert that he won the Napier seat without vote-splitting creating an artificial majority, as happened three years ago.

It’s not often that I agree with NZ First leader, Winston Peters. But on 27 September he told the media;

“This will be the last press conference I am going to hold until after the 7th of October… I can’t tell you what we are going to do until we have seen all the facts.

I can’t talk to you until I know what the 384,000 people who have cast their vote said… please don’t write the kind of thing saying someone has moral authority…we are not first past the post here.”

Until Special Votes are counted, making statements to the media is an exercise in futility. It would be pandering more to the dictates of the 24-hour news cycle rather than offering anything constructive to the public.

At this point the media will have to exercise patience and simply accept that until Special Votes are counted, nothing can (or should) happen.

The democratic process cannot; must not; should not, revolve around the 24-hour news cycle.

The Curious resignation of  Wayne Eagleson

Something very, very curious has transpired in the dark coridors of power in the Beehive. The Prime Minister’s Number 2, right-hand man, Wayne Eagleson  announced his resignation on 25 September.

Eagleson was one of several high-ranking National figures who were informed that Winston Peters had received a superannuation overpayment.

On 26 September, both English and Eagleson vigorously denied leaking – or having knowledge of who might have leaked – information on Peters’ superannuation overpayments;

“It didn’t come from the National Party.” – Wayne Eagleson

“No, not all. I take people by their word that no action was taken by my staff in making that information public.” – Bill English

Now, aside from the fact that Bill English has already shown himself willing and capable of telling lies, by repeating Steven Joyce’s fabrications over Labour’s “$11.7 billion hole” and “increased personal taxes”, there remain an interesting question regarding the statements made by the Prime Minister and Wayne Eagleson.

Namely this: How can either English or Eagleson know with absolute certainty that the leaking of Peters’ personal superannuation details did not come from someone/anyone connected to the National Party?

If they truly  know – with 100% certainty – that no one in the National Party leaked the information; how do they know this? How is that possible?

In fact, it is not  possible.

In that respect, both English and Eagleson are covering up the possibility that the leak emanated from someone within the National party or government.

And if both men are willing to take that small step to cover-up the merest possibility of an internal National Party leak… would it be too much of a stretch to assume that one or both are fully aware of who the leaker is?

Why did Eagleson resign – especially at this very crucial time of coalition negotiations?

And what does Winston Peters know of why Eagleson resigned?

Wayne Eagleson knows more than he is letting on, as does Bill English.

Winston Peters has had his ‘utu’.

Mediaworks:  A phone call between National and the Greens would be a short one

Fairfax media:  The Green Party also hold the balance of power, but they don’t seem to want it

Fairfax media:  Mark Richardson declares himself as a National supporter, does that matter?

National Party:  10 ways National is helping families get ahead

Green Party:  How you vote has never been so important

Mediaworks:  As it happened – Parties prepare for election negotiations

The Standard: How a National/Green coalition could work

Observations on the 2017 Election campaign… (waru)