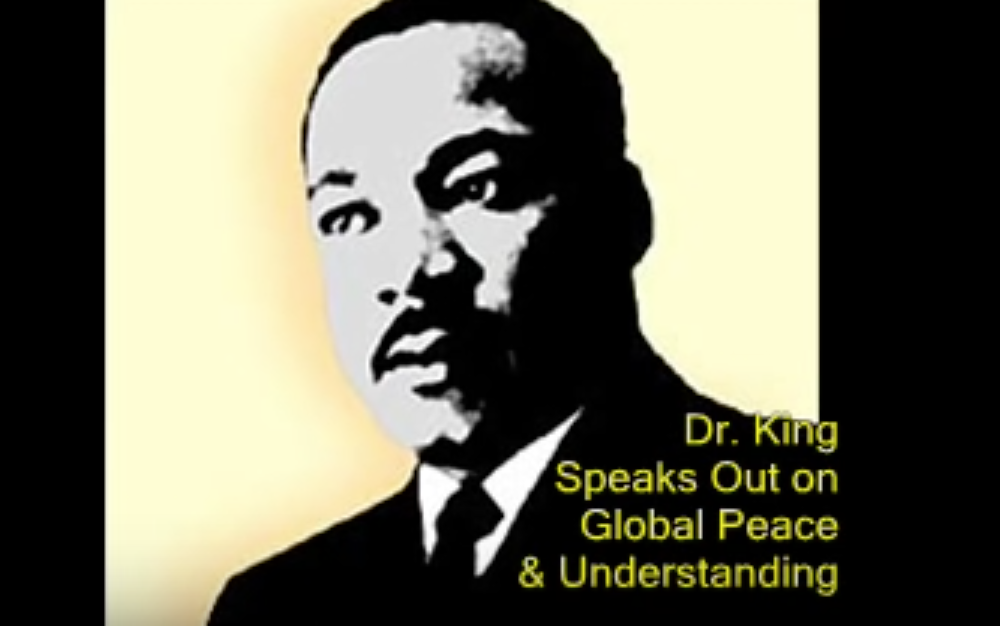 In April 1967, FIFTY YEARS AGO, Dr Martin Luther King spoke at the Riverside Church in Manhattan, NYC, warning of the moral failure of a country addicted to war.

Dr King began his speech by admitting  that  many of his critics, saying ‘peace and civil rights don’t mix’, wanted him to remain silent about the Vietnam War. But Dr King’s  reply to this argument was, “ A time comes when silence is betrayal.”  Furthermore, those who want him to remain silent, “do not know the world in which they live.”

Martin Luther King explained how promised programs to improve social conditions were abandoned to finance the war machine. “ It seemed as if there was a real promise of hope for the poor, both black and white, through the poverty program. Then came the buildup in Vietnam …  and I knew that America would never invest the necessary funds or energies in rehabilitation of its poor so long as adventures like Vietnam continued to draw men and skills and money like some demonic destructive suction tube. So I was increasingly compelled to see the war as an enemy of the poor and to attack it as such.”

Dr King  described his experiences when trying to convince angry young men in the black ghettos of American cities, to reject violence. “As I have walked among the desperate, rejected and angry young men I have told them that Molotov cocktails and rifles would not solve their problems. I have tried to offer them my deepest compassion while maintaining my conviction that social change comes most meaningfully through nonviolent action. But they asked, and rightly so, what about Vietnam? They asked if our own nation wasn’t using massive doses of violence to solve its problems, to bring about the changes it wanted. Their questions hit home, and I knew that I could never again raise my voice against the violence of the oppressed in the ghettos without having first spoken clearly to the greatest purveyor of violence in the world today — my own government. “

Martin Luther King in his famous speech of  50 years ago, opposed not just the Vietnam War but all war. His speech was attacked by many, including prominent American newspapers.

Dr King was assassinated one year after his Riverside anti-war speech. What a loss, not just to the US but to the world.

President Trump has just told us that beautiful babies have been killed in Syria and he would do something about that, by launching missiles.  Overnight Trump has become the darling of mainstream  American media and even of the Democrats. That’s a political lesson he won’t forget.

Martin Luther King said at the Riverside Church  “….we as a nation must undergo a radical revolution of values. We must rapidly begin the shift from a “thing-oriented” society to a “person-oriented” society. When machines and computers, profit motives and property rights are considered more important than people, the giant triplets of racism, materialism, and militarism are incapable of being conquered. A nation that continues year after year to spend more money on military defense than on programs of social uplift is approaching spiritual death.”

Shouldn’t we , here in NZ, reflect on Dr King’s anti-war speech of  50 years ago?

When visiting the US in the 1980s,  I was surprised that whenever I mentioned New Zealand, people commented, favorably,  on our nuclear-free stance.

There is an important role New Zealand could play today.  We could withdraw from our military and electronic spying agreements, telling the world that we oppose militarism. Such an action would not be anti-American. It would be pro those many Americans who realise that their country is dysfunctional, dangerous, unpredictable. Such a stance would be welcomed by Quaker groups, Peace Action, Codepink, Ploughshare Activists, WarNoMore. BlackLivesMatter and others .

New Zealand could provide the leadership that the world is longing for. Now is an excellent time for New Zealand to take such a stand, in honour of the memory of Dr Martin Luther King.