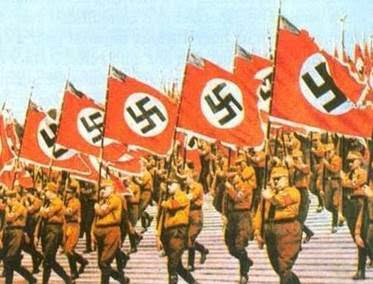 THE AUCKLAND UNIVERSITY EUROPEAN STUDENTS ASSOCIATION (AUESA) is more likely to be a student prank than an Alt-Right outrage. Certainly, its mild-mannered spokesperson sounded altogether too apologetic and accommodating to be a genuine Nazi.

His polite application for a stall at the Orientation Club Expo bears all the hallmarks of a young, suburban Pakeha male somewhat shamefacedly following-through on a late-night, ill-considered exercise in faux-fascist brainstorming involving him, his mates, and altogether too much alcohol.

Far from being alarming evidence of stormtroopers on campus, AUESA is much more likely to be just one more sad example of the sort of “casual racism” that still permeates huge swathes of Pakeha society. That, and the bizarre fascination the iconography of the Third Reich still exerts upon the imagination of young white men.

Writing the script for this sort of nonsense is depressingly easy:

THE ACTION takes place in the basement recreation room of an impressively large dwelling in deepest Epsom. The house belongs to James’ parents. Like himself, James’ friends, Tim and Carl, are Grammar old-boys. All of them are about to begin their second year at the University of Auckland. James is studying law, Tim marketing, and Carl history. The young men are sprawled around a low table upon which stands an expensive bottle of tequila, numerous quartered lemons, three shot glasses and random drifts of salt. The floor is strewn with green stubbies and empty pizza boxes.

JAMES: “I reckon there should be a club for whites. Somewhere to celebrate European culture.”

CARL: “We should form one!”

TIM: “Yeah, we should. God, imagine how freaked-out all the politically-correct types at AUSA would be.”

JAMES: “Not to mention the media!”

CARL: “Ooh! Ooh! I know something else we should do!”

TIM: “With lightning bolts and swastikas and a thrash-metal soundtrack!”

CARL: “Fuck yes! The lefties would think that the Alt-Right and Steve Bannon had taken up residence in the Varsity clock-tower!”

JAMES: “Nah. Too much. We’d get into all kinds of trouble. We need to be more subtle.”

JAMES: “What about using Celtic, as opposed to Germanic, symbols?”

CARL: “Yeah! Great idea! And we could have a motto – like the Hitler Youth’s motto: ‘Blood and Honour’!”

JAMES: “You realise we have to do this now.”

CARL: “Absolutely! We have to!”

JAMES: “Gentleman, please be upstanding and raise your glasses to ‘The Auckland University European Students Association’.”

ALL: “Strength through Honour!”

PLEASE NOTE: This is satire. Any resemblance to actual persons, living or dead, or to real events, is entirely accidental.