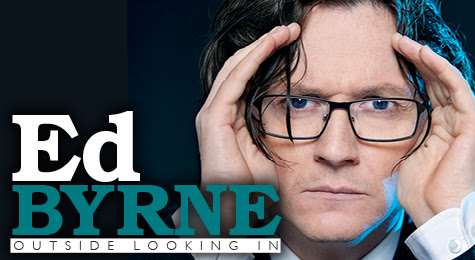 Irish comedian and international sensation, Ed Byrne, celebrates his 20 year love affair with NZ audiences with his seventh tour down under, in his new show ‘Outside Looking In’. This highly acclaimed show will be one of the headlining acts the 2017 NZ International Comedy Festival powered by Flick Electric Co in Auckland and Wellington. He is also touring to Napier, New Plymouth and Auckland’s North Shore in April and May.

Back in 1996, when he first toured to New Zealand, stand-up comedy was the new rock ’n’ roll. Ed lived hard and fast like a would-be rock star. Twenty years on times have changed. Ed is not only a family man, he has also now embraced the great outdoors and can often be found scaling mountain peaks around the world.

But one thing hasn’t changed – Ed has always felt like an outsider looking at a world within. This perspective has made him one of the keenest and most in demand observational comedians in the UK and a frequent guest on notable TV and radio shows such as Mock The Week, Live at The Apollo, The Graham Norton Show and Have I got News For You?

In 2017 Ed returns to NZ with his new show, ‘Outside Looking In’ which he has been touring to sold out houses around the UK over the last 12 months.

✭✭✭✭✭ “A masterful display of the comics art…This is a seamless and perfectly timed show that could stand proudly next to any Izzard, Bailey, Carr or Skinner stadium-filler” SUNDAY TIMES

✭✭✭✭✭ “Hilarious anecdotes! I assure you Ed Byrne is one comedian you should DEFINITLEY see” EDINBURGH FESTIVAL MAGAZINE

✭✭✭✭ “Byrne is at the top of his game” SUNDAY TELEGRAPH

He will be reunited with local producer, Scott Blanks, who was instrumental in getting Ed to New Zealand 20 years ago. Ed will be joining in the celebrations of the 20th year at The Classic, New Zealand’s own world class home of live comedy.