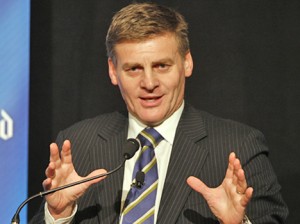 Bill English is an incredibly savvy and intelligent strategist and the Left should not underestimate him.

The Machiavellian smarts  to stay out of the Mt Albert by-election and allow Greens and Labour to be framed as fighting, the Machiavellian dog whistle to dump on Waitangi and his fluent use of Maori at Ratana yesterday all suggest a Politician who has relied on sly cunning over the retail charisma of Key to keep and hold power.

1 – Global ructions that hit the economy – the first sign of danger Internationally and he might want to go to the Polls sooner rather than later and allow the damage to set in.

2 – Mt Albert by-election – If Labour can be wounded or worse then Bill might want to call a snap election.

If the Left underestimate English, National get another term.