Thursday, December 22: Groups campaigning on climate change, fracking, oil and gas drilling and social justice from across Aotearoa have announced plans to disrupt the New Zealand Petroleum Conference in March next year.

The People’s Climate Rally is being organised by a coalition of groups including Climate Justice Taranaki, Frack Free, Oil Free Wellington, Greenpeace New Zealand and 350 Aotearoa.

The two-day event, on March 22 and 23, will include peaceful protest, workshops, and entertainment for people of all ages that promotes a world without fossil fuels in order to curb the looming climate catastrophe.

The target is the NZ Petroleum Conference, held over the same time in New Plymouth, which will see hundreds of delegates from oil and gas companies meet to discuss oil exploration opportunities in New Zealand.

Sponsored by government agency NZPAM, the annual conference is also attended by domestic decision makers including the Minister of Energy and Resources, the Ministry of Business, Innovation and Employment, Taranaki Regional Council, and NIWA.

Previously held in Auckland and Wellington, the petroleum conference has been met by mass peaceful protest since 2012. This has included hikoi and marches of more than 5,000 people. This year, a blockade outside Auckland’s SkyCity delayed the start of the conference by several hours.

The conference has now been moved to New Plymouth for 2017. Taranaki has been the centre of the New Zealand oil industry for 100 years.

Spokesperson for Climate Justice Taranaki, Emily Bailey, says the oil industry and the Government have continued to exploit oil and gas and ignore local community concerns about its environmental and human costs.

“The oil and gas industry have been making a retreat this year, pulling out of permits and cutting investments,” she says.

“Now they’re moving from Auckland to hold their annual conference in what can only be seen as a retreat to ‘safe territory’, but we are stepping things up to tell them it’s time to stop the drilling and ensure a future without runaway climate change.”

New Zealand needs a rapid investment in a just transition away from these dirty fuels and into climate-friendly jobs, Bailey says.

The coalition will be developing The People’s Climate Rally over the coming weeks. Kicking off just days after Taranaki music festival, WOMAD, the group is encouraging festival goers to stay on afterwards to take part in the protest.

350 Aotearoa spokesperson, Niamh O’flynn, says the petroleum conference “flies in the face” of what is right for people and the planet.

“These companies and our Government are acting like drilling for more oil and gas has no consequences. We know that they do, and it’s climate change,” she says.

“When our farmers are struggling through drought, our snowfields are without snow, and our sea-levels are rising, it’s our responsibility to stand-up to the Government and the fossil fuel industry that are ignoring reality and wilfully wrecking our climate.” 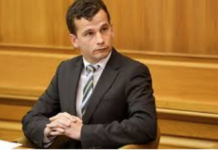